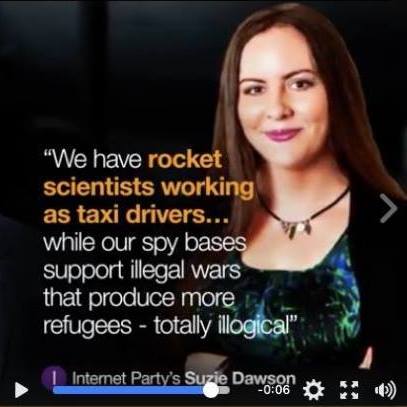 For 6 years I have been publicly naming Thompson & Clark Investigations Limited for having been involved in the political targeting of me for my activism and journalism.

It’s now all over the NZ mainstream press that they were in fact targeting activists, political parties, and others involved in many of the causes I was actively participating in and covering. And that multiple government departments and the NZ police were neck deep in it.

Despite this, not one single member of the mainstream media has reached out to apologise to me for ignoring my myriad reports/outreach since 2011 about what was being done to me all these years, or to find out what further information/evidence I have or to interview me about it.

Everyone from David Farrar who wrote smear pieces about me on Kiwiblog suggesting that I was just mentally ill/paranoid to the countless people who put what I was saying in the “too scary” or “too strange” box, I have now been nearly fully vindicated (revelations of the extent of the American agencies involvement are still yet to come) and I hope those members of the media, the political class and the public who were so disdainful now have a hard look at yourselves and why you were so eager to disbelieve/skewer a solo mother and to reinforce a tyrannical establishment preying upon its own citizenry.

I would like to give a huge special thank you to my incredible media team, friends and family in NZ who stood by me from the outset and never wavered – you were a huge part of how I made it through this ordeal.

The irony is not lost on me that I work with the top whistleblowers, independent media and public speakers in the world, none of whom disbelieved me and all of whom have stood by me, while the NZ media and political class have cowered and hidden the truth for years.

To the predators who thought they could get away with what they were doing forever – it is you who are now feeling the fear, cowering in your boots and being looked upon with disdain and shame.

The tip of the iceberg of what you have done is now being exposed and there are still huge revelations about your crimes yet to come.

President of the Internet Party