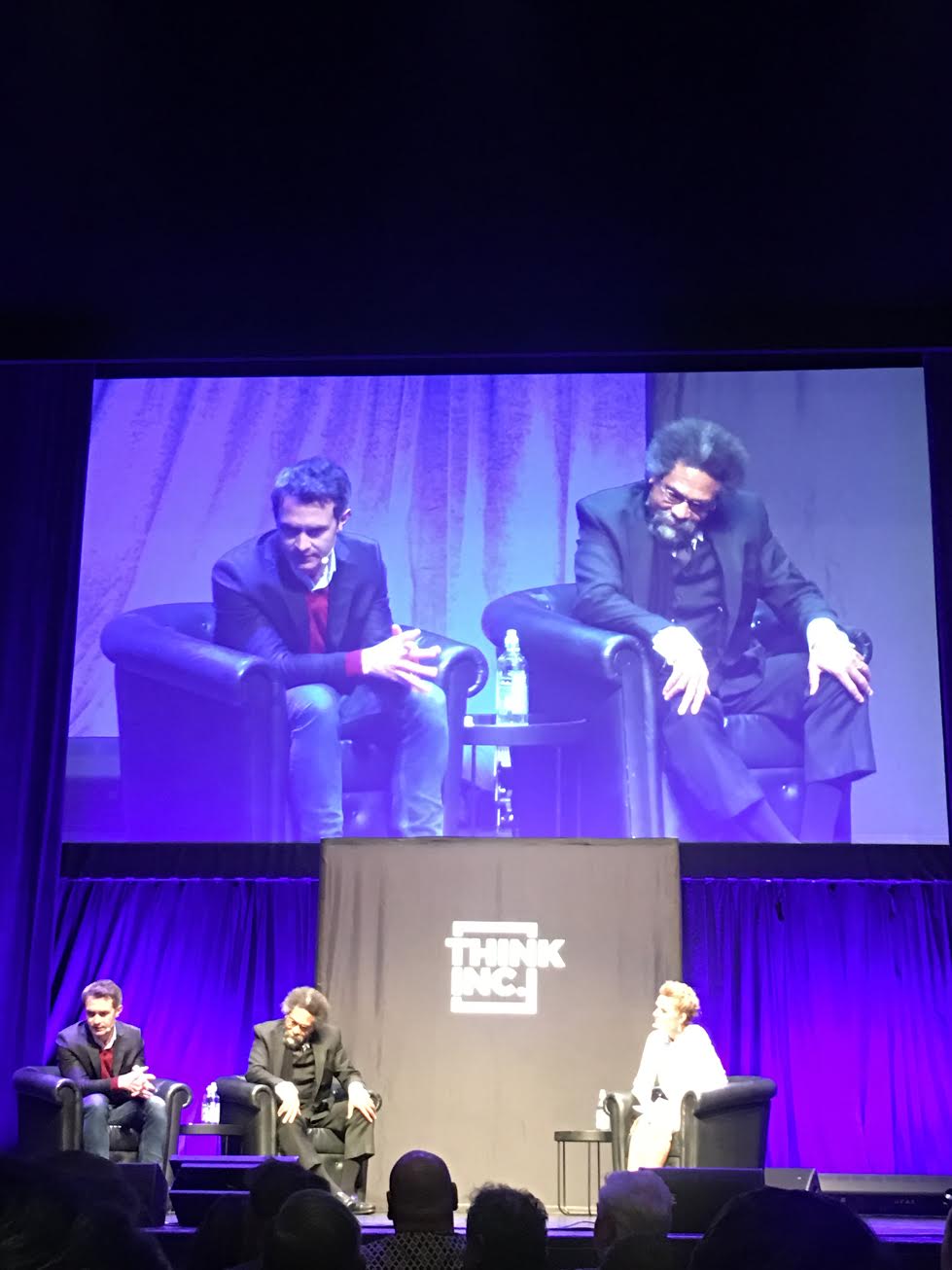 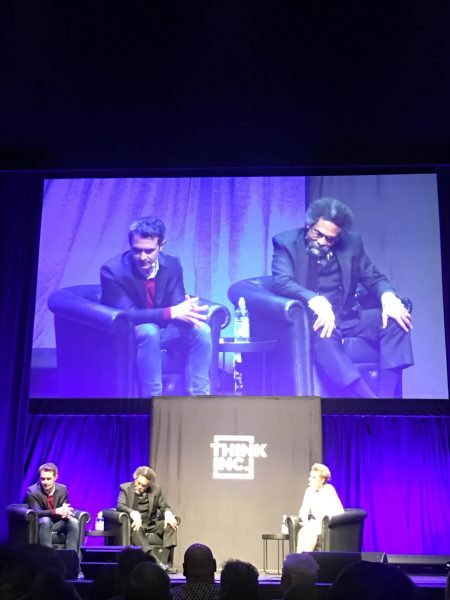 The organisers, Think Inc, promoted the event as a `fight` between `big brain trouble makers` who would be let `loose on each other`. Yet, spontaneous conflict was never likely; the two combatants had also signed up for similar  on-stage encounters in Melbourne, Sydney and  Brisbane. Their ideas and political commitments are of course radically different. Cornell West, philosopher, African-American scholar, social critic and activist is shaped by the writings and militancy of C.L.R  James, Aime  Cesaire, William De Bois, Malcom X and the Black Panther party. As a long time member of the Democratic Socialists of America, West has resolutely opposed neo-liberalism, transnational capitalism and the US Democratic Party establishment. He openly criticised President Barack Obama`s deference to Wall Street and supported Bernie Sanders` Democratic  primary campaign before the last US Presidential election. The world view of Douglas Murray – British author journalist and political commentator – was shaped by neo-liberal economic thought, American neo-conservatism and the politics of Thatcherism. More recently he has argued that Europe`s civilizational heritage is endangered by excessive immigration, Islamic religion, identity politics and multiculturalism. Murray identifies as gay and atheist rather than as a strict religious conservative.

Now to the event. My companion was Diana – a chef, DJ and US anti-racism activist  recently settled in Auckland. We entered the ASB theatre to an Aretha Franklin soundtrack. The sizeable audience was mainly but not exclusively white and reasonably well off as you might expect at $90 a ticket. There were no demonstrators or proselytizers to be seen. With refreshments  in hand we took our seats in the stalls, twelve rows back from a spotlighted stage with three chairs. After a quick screening of international video clips featuring recent public altercations between  rival protestors,  West, Murray and chairperson Mihingarangi  Forbes  arrived on  stage.  Mihingarangi`s eloquent Mihi contributed to an initial mood of détente. Murray exuded Oxbridge affability and politeness   while West announced that `we are old fashioned high –brow humanists`.  However, as the evening unfolded their mutual interest in Greek and Enlightenment philosophers became less important than their intellectual divergences. Throughout the exchanges West referred to the inequalities and power structures of capitalism as the underpinning for today`s  immigration controversies, religious tension and racial strife. On this account the writings of Marx could be counted within the Western humanist tradition. Murray acknowledged  that the 2008 financial crash was socially damaging but would not concede that capitalism as such should be radically scrutinised.

For the most part our guests spoke past each other with civility. Diana astutely noted that Murray`s objective was to court and charm the audience while sidestepping West`s intellectual charges and counter charges. But these matador moves were not flawless. In one exchange Murray claimed that the left was committed to creating new things whereas conservatives alone sought to protect what was of traditional value. West responded that long standing traditions rebellion and emancipation were also worth preserving. In short, social justice activism speaks to its own traditions rather than those advanced by establishment elites. Here, the matador was caught out by the logical corollary of his original claim. In another exchange Murray declared that the mass atrocities of Stalinism and Maoism were not properly acknowledged by the left. West replied that all political viewpoints must acknowledge their blindspots. Simply recounting the totalitarian extremism associated with left and right is historically misleading. The so called liberal centre has blood on its hands as well. West cited the civilian fatalities of Drone strikes signed off by President Obama. One might also recall the bi –partisan Party support for the Vietnam War ,at least until 1968,  and the near unanimous Congressional support for the bombing and invasion of Iraq in 2004. Of course, none of these examples quite matches Stalin`s purges and Hitler`s holocaust ; West`s  point was that in Western politics a pure, civilised centre ground doesn`t actually exist.

These and other exchanges were engaging but there was no real cordite. The event choreography was pre-arranged and the intellectual points of conflict were not teased out and clarified by the chair. Instead the speakers worked through pre-set discussion themes – your heroes, equality, social media, migration etc. on one occasion Murray lost track of where he was -`here in Australia` was his unfortunate misnomer. My immediate thoughts went back to earlier times when well spoken Oxbridge types, with little local knowledge, would visit the colonies. The evening livened up during question time. As the political leanings of questioners became clear the audience found their voice and partisanship. I turned to Diana  and said `I`m going up`.  At the microphone I  questioned Murray about his latest book  The Strange Death of Europe: immigration,identity  Islam. `How would you define Europe? ` I asked.` Are we referring to Scandinavian Europe, Western Europe, Eastern Europe or the Europe of secular enlightenment?`  ` Does Europe really have a primordial essence?` Well, his answer cryptically referred to Athens and Jerusalem as the wellsprings of European intellectual culture  without mentioning Andalusia and Cordoba where ,during the 1100s and 1200s , Islamic scholars wrote commentaries on the classic Greek texts which were to influence Christian and Jewish theologians. In sum, Murray`s lament for Europe is narrowly construed and historically selective. His prophecy of European decline is shared by other  conservative-right   figures such as Edward Luce  The Retreat of Western Liberalism, Bill Emmott The Fate of the West: the battle to save the world`s most successful political idea ,David Goodhart  The Road to Somewhere: the populist revolt and the future of politics and Mark Lilla The once and Future Liberal; after identity politics. Against all of this we are, I think, in Aotearoa- New Zealand, better served by the more cosmopolitan standpoints of Cornell West. He draws upon Western  humanism  including socialist writings as well as the classic anti-imperialist texts which informed the struggles for decolonisation during the 20th century . In the United States his commitment to democratic ideals is driven by the legacy of historic struggles to abolish slavery and institutional racism. In a world of rhetorical posturing , which gulls the right and the left,  he offers intellectual depth and political clarity

After the event Diana and I repaired to a local inner-city  bar where we raised our glasses  – to Cornell West and Aretha Franklin.