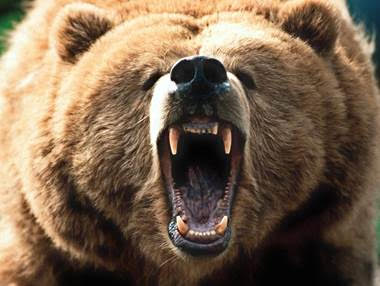 THAT THE INSPIRATION for this posting came from a man who spent his life studying grizzly bears is entirely fitting. The free speech debate of the past fortnight has seen more than a few angry grizzlies come galloping out of the woods. The question in most need of an urgent answer is – why? What is it that leads the Right to defend the principle of free speech so vigorously? And why has the contemporary Left departed so dramatically from Noam Chomsky’s free-speech absolutism?

Having watched the grizzly bear population of Yellowstone National Park dwindle under the impact of climate change and observed the blank unwillingness of state and federal wildlife protection agencies to intervene, or even acknowledge the need for intervention, David Mattson went in search of some answers.

His explanation for the Right’s ingrained antagonism towards climate change, published in Counterpunch under the headline “The Sinister Underbelly of Climate Change Denial” is unequivocal:

“Educated but mostly-white conservative businessmen and political servants/allies recognize a threat to their current near strangle-hold on power and wealth arising from calls to address rampant climate warming. They see those who promote alternative climate-cooling lifestyles and technologies as enemies to their existing entitlements, certainly profits and power. They are, moreover, inclined to be bigots. Being clever, they mobilize their equally bigoted but less educated, less cognitively capable, and exceedingly fearful base comprised largely of increasingly disadvantaged white males by appealing to their interest in maintaining the status quo and inflaming their fear of an alien intrusive world, manifest as ‘immigration’ and ‘immigrants’.”

From the oil-giant Exxon, to the coal companies currently driving US environmental policy, the historical footprints linking the fossil fuel industry to climate change denialism have long since been forensically tracked and identified. Mattson is right: denialism is a manifestation of reactionary capitalist fear.

The Right’s need to mobilise people’s fear lies at the heart of its determination to defend free speech. If the environmental agencies of the state were to be captured by political forces determined to, in Mattson’s words, “promote alternative climate-cooling lifestyles and technologies”, then denialist propagandists would very soon find themselves being countered by the full force of the scientific community. Hence the need of the most reactionary forces within capitalist society to retain full control of the state apparatus – a goal that can only be achieved by mobilizing their “equally bigoted but less educated” fellow citizens against an “alien and intrusive world” peddling fake news about everything from immigration to anthropogenic global warming.

The proposed visit to New Zealand of Lauren Southern and Stefan Molyneux should be viewed in the light of the Right’s on-going mobilisation of Mattson’s “increasingly disadvantaged white males”. An important element of this mobilisation process involves persuading its target audience that “the powers that be” are determined to suppress information which they have a right to know, but which the “liberal elites” don’t want them to hear. In this respect, the Mayor of Auckland’s decision to deny Southern and Molyneux access to Council-owned meeting-halls, played directly into their hands.

Obviously, the most effective strategy for defeating the Right’s strategy of mobilising fear is by countering its lies with the truth. This may not be as difficult as many opponents of the Right would have us believe. As Mattson notes in his article:

It is in relation to this group of voters that the Left comes to grief over free speech. Climate change denialism and free speech denialism both being born of fear.

The Right is terrified of ordinary people learning the truth about capitalism and its causal relationship with environmental devastation – hence its determination to destroy their faith in science and social progress.

The Left, or at least a distressingly large part of it, is equally terrified that ordinary people are either incapable of absorbing, or unwilling to accept, the implications of the scientific research into climate change. Worse still, many leftists believe that ordinary people (white working-class males in particular) are equally unwilling to absorb and accept the Left’s arguments in favour of equality and diversity. That, in Hillary Clinton’s catastrophic characterisation, they are “a basket of deplorables”. Ignorant rubes who must, at all costs, be kept away from the influence of the Right’s agitators – even if that involves reducing freedom of expression to the status of “collateral damage” in the culture wars.

Nothing could be more helpful to the cause of the Right than a Left which has lost its faith in the people. What, after all, is more likely to cause the people to lose faith in the Left than a nagging suspicion that their self-appointed liberators regard them as being either too vicious or too stupid to grasp the arguments in favour of individual freedom and social justice without instruction from above?