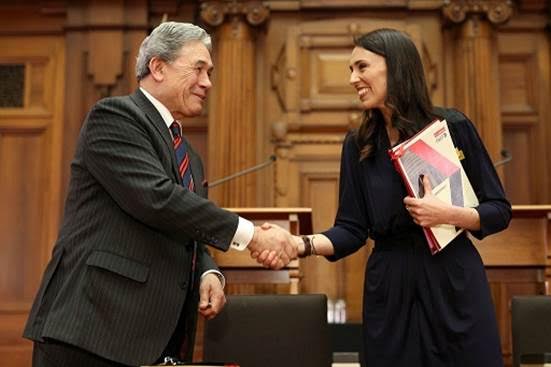 WINSTON PETERS had better have something up his sleeve – preferably an ace – or things are going to get messy. Reviewing the latest poll from Newshub/Reid Research, the thought must surely have crossed the NZ First leader’s mind: “Did Jacinda play me?” Because, it is almost impossible to imagine a politician as experienced as Peters agreeing to install such a potentially unstable combination as the Labour-NZF-Green government without first being convinced that Jacinda was genuinely committed to New Zealand’s economic and social transformation.

Seven months into the Ardern-led government, however, it must be clear that his assumption that Jacinda and the Labour Party were one and the same was profoundly mistaken. Peters was right in thinking that without her even the possibility of change would be non-existent. Where he erred was in thinking that Labour’s willingness to be guided by the person who had brought power within its grasp was anything like as great as NZ First’s. Jacinda may have rescued Labour from a crushing (perhaps fatal) defeat but that didn’t mean she was the boss – not by a long chalk.

Since Helen Clark’s departure in 2008 the Labour Party has come to resemble the Scotland of the 1500s. Nominally an absolute monarchy, England’s northern neighbour had singularly failed to produce a dynasty to match the all-powerful Tudors. Scotland had thus become a rancorous and fractious realm in which the monarch wasn’t evenprimus inter pares (first among equals) but the plaything of its most powerful noble families.

Over the past nine-and-a-half years Labour’s parliamentary caucus has steadily fallen under the sway of a handful of ambitious MPs, without whose backing none of its leaders have been able to operate effectively. The most powerful of these MPs, Grant Robertson and Phil Twyford, have become (not coincidentally) the crucial arbiters of what is – and is not – going to happen in the Labour-NZF-Green government. If Peters had anticipated calling the shots alongside Ardern, then he must be feeling tremendously frustrated.

Certainly, Peters was able to secure a considerable sum for his own foreign ministry and a billion-dollar regional investment fund with which his most likely successor, Shane Jones, can top-dress the provinces. But, the Deputy Prime Minister is not blind, he must see that it is these two men, Robertson and Twyford, who will make or break the government he and Ardern caused to be formed.

What Peters needed, and what Ardern showed every sign of wanting to form, was a government dedicated to making big changes. Nothing less could hope to deliver the “transformation” promised by the Prime Minister. Her “politics of kindness” would require a revolution – of sorts.

The 2.4 percent level of electoral support to which NZ First has fallen is a reflection of just how far the government put in place by Peters has fallen short of its followers’ expectations. Only now, on the eve of becoming NZ’s acting prime minister, is it becoming clear to Peters that “Jacinda” is a politician with two faces. The first is the face New Zealanders thrill to: hopeful, open, empathic. The second is the face she wears in Labour’s caucus: shrewd, cautious, realistic. Peters is realising, too late, that it is this all-important second face that Ardern will, on no account, set against her two overmighty subjects: Robertson and Twyford.

What Peters needed from Labour were revolutionaries. What he got, in the seats of power that truly mattered, were two uninspiring tinkerers with the status quo. Last October, Peters and NZ First were confident that what they were hearing from Jacinda and her colleagues were the uplifting harmonies of kindness and transformational change. Seven months on, it’s clear that whatever kind of music is killing them softly – it isn’t the Hallelujah Song.