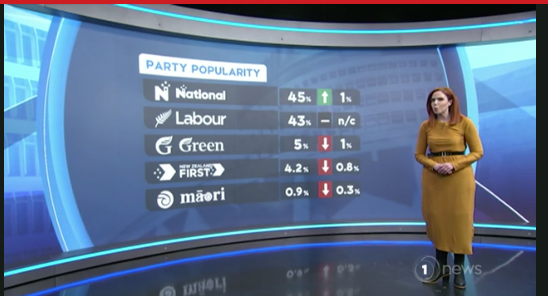 More disappointing news for the Government in the form of the latest TVNZ Poll and finally the evidence of what TDB has warned about, the National Party are about to create an ally Party.

National up on 45%, Labour on 43%, the Greens sliding into irrelevance on 5% and NZ First made irrelevant by sliding under the 5% threshold with 4.2%.

TVNZ has a 50-50 landline and cell phone poll, so this methodology should benefit the Left.

Simon Bridges has finally admitted what TDB has been warning of for several months now, that they are looking to create an ally Party.

Here is the play that TDB has been warning about –  Mark Mitchell will suddenly become the Leader of this new Ally Party, National will allow him to run in Rodney unchallenged and the MMP coat tailing will bring in the rest.

The new Government still doesn’t have the communications sorted or the agenda and vision to start paying their support base black for their faith and that is why those voters are fading.

The activist Left are too busy screaming at each other on social media while the right wing Troll farm at the NZ Herald continue to destroy and misrepresent the Government every day of every week.

This has the smell of a one term Government unless the Left wake the fuck up.

The Government needs a far better communications plan, their selling of the budget was woeful, and they need to put together a strategy to ram through public service reform so that they can actually get policy adopted rather than resisted.

They also need a far smarter game plan to go up against the Opposition.

Matt McCarten has been punished long enough by the Labour Party Wellington Mandarins, it is time to being him back into the fold to run the counter intel tactics.