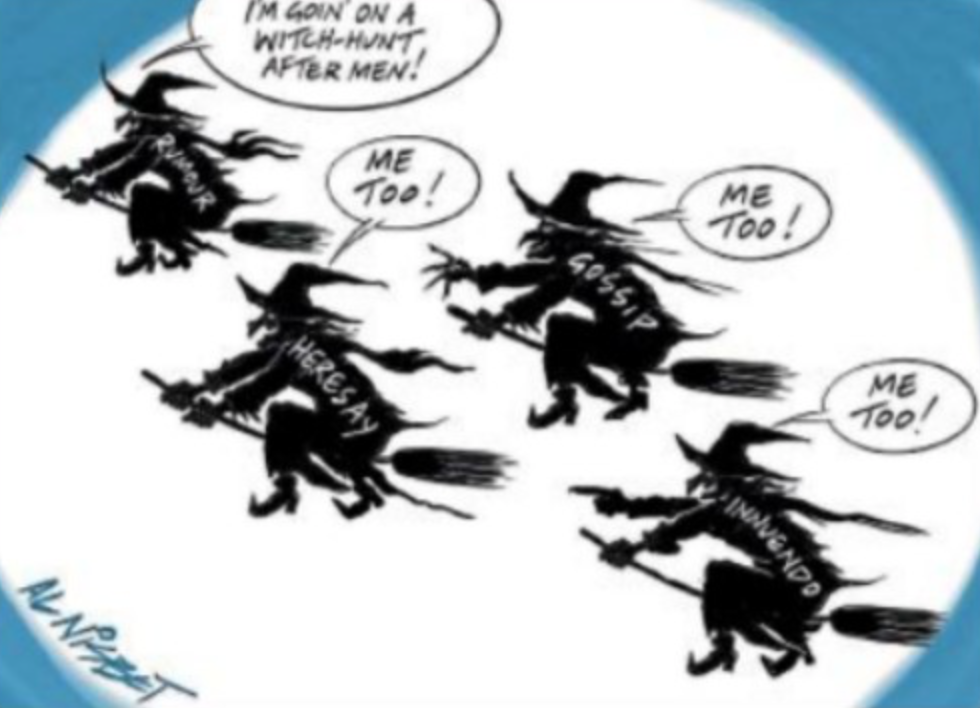 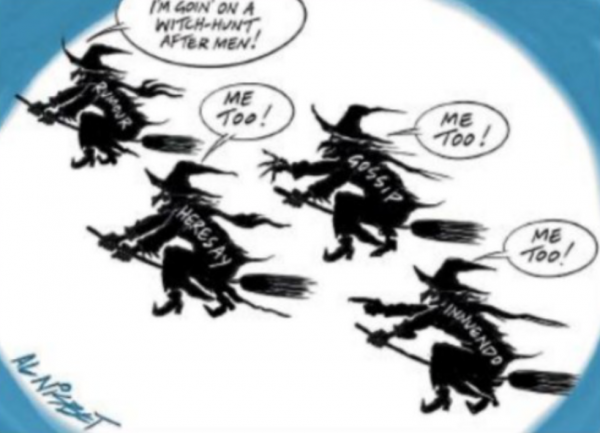 There seem to be two enormous forces hurtling towards each other.

On the other side you have men fearing that they will be unfairly outed on social media in a witch hunt.

This latter response seems to be ill educated because what is confronting men is far more fundamental a swing of the pendulum against them than a witch hunt, it’s a witch trial.

A ‘witch hunt’ is an angry lynch mob hunting for a mythical monster and what we have learned and seen about harassment in the work place over the last couple of years tells us that harassment isn’t a myth, it’s real, it’s visceral and it’s unacceptable.

We don’t have a witch hunt against men here because there clearly are monsters deserving of being hunted, but we do have the ingredients for a witch trial.

The Salem Witch trials in 1692 were made infamous because the evidential threshold was lowered to mere allegation. All a woman had to do was stand, point and say, “Goodman Ezekiel made me fornicate with the Devil’ and Goodman Ezekiel was executed.

Current debate stipulates that anyone claiming harassment or sexual assault must be believed and that any attempt to challenge, critique or question any allegation is slut shaming, victim blaming or perpetuating rape culture.

While that is a valid means of supporting victims in a system where few ever see justice, it can not in of itself replace the hundreds of years of established evidential thresholds that make Court’s arbitrators of the law.

Within the #MeToo movement there is a fierce debate between radical feminists and liberal feminists. Radical feminists do not care if innocent men get destroyed by false allegations because all means justify the ends of patriarchy. Liberal feminists argue you can’t write off 50% of the species as rapists and due process matters. Trial by Twitter would be a great leap backwards even if  those being destroyed are loathsome.

Why Alison Mau’s #MeTooNZ campaign is such a positive addition to the debate however is because her investigations will need to occur within investigative journalist standards and defamation law.

NZ has some of the most stringent defamation law in the world and many on social media seem to have no understanding of it. The cost to successfully sue a defamatory comment on social media is offset by the fact that most on social media have no money to cover the legal bill let alone the damages. Fairfax on the other hand is a multi-million dollar transnational corporation who would be under intense scrutiny from defamation law if a story simply relied on an allegation against an individual.

This means any investigation will need to be on solid ground and removes the fears of a witch hunt or witch trial.

Ultimately I think the #MeToo campaign will out some abusers and they will be punished and women will see some sense of justice however once men fully comprehend that their entire career, reputation and life can be destroyed with just one single allegation on social media, we will see a polarisation of the sexes that will make Orthodox Jews look liberal.

When men understand they could lose everything with no due process whatsoever they will rush to remove themselves from any situation where they are alone with women be it social or business.

Such social polarisation isn’t new or unheard of, we’ve seen this before with men and children. Throughout the 80s and 90s the narrative was any man who hangs around children was a pervert and there was an exodus in male primary school and secondary school teachers and it simply became untenable for any man to be anywhere near children.

Even now, any man who voluntarily hangs around children is viewed with deep suspicion socially.

American Vice President Mike Pence was mocked for his rule to never be alone with a woman, as the power of allegation eclipses due process, many men will come to see Pence’s position as the only survivable tactic in a post #MeToo world.