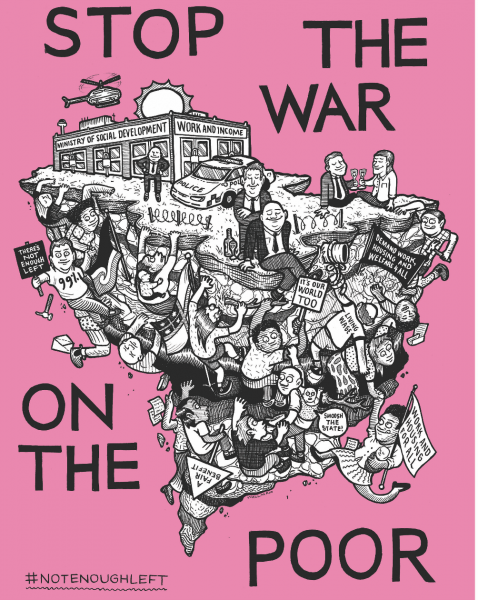 Over the past two months, Auckland Action Against Poverty have been talking with beneficiaries about their visions for a welfare system based on equality and not punishment.

“Overwhelmingly, the responses from beneficiaries we have spoken to are that benefit rates are too low to live on with dignity,” says Vanessa Cole, Co-ordinator for Auckland Action Against Poverty.

“AAAP has released their demands for the election and beyond based on stories and ideas gathered from beneficiaries.

“Alongside these demands, AAAP has released a video which features beneficiaries talking about their experiences of Work & Income, housing and work.

“The demands include liveable incomes for all, building a culture at Work & Income based on respect and redistribution, a mass build of state housing with secure tenures, and a tax on wealth.

“Welfare is not simply a safety net for unforeseen hardship. The purpose of welfare is to ensure beneficiaries and their families can live in dignity, participate in society, and have an opportunity to access meaningful, dignified work where their labour is valued.

“The unemployed are not the cause of unemployment. Current welfare policy is clearly based on the lie that being unemployed is the fault of beneficiaries.

“Benefit rates and the toxic Work & Income culture punishes and degrades people, forcing people into low-paid work, and keeping them in a poverty trap.

“Paying a liveable income to both unemployed and employed workers will remove the coercive incentive to work to survive. It will also acknowledge all the unpaid work people engage in.

“With high levels of homelessness, and a policy environment set on destroying state housing, it is essential that the Government builds massive amounts of state housing with secure tenure.

“We should not be talking about surpluses and fiscal responsibility. We need to start talking about taxing wealth and redistributing this wealth so all people can live a full and decent life.

“A welfare system based on respect and redistribution, where all people have enough income to live in dignity is entirely possible, we just have to fight for it.”