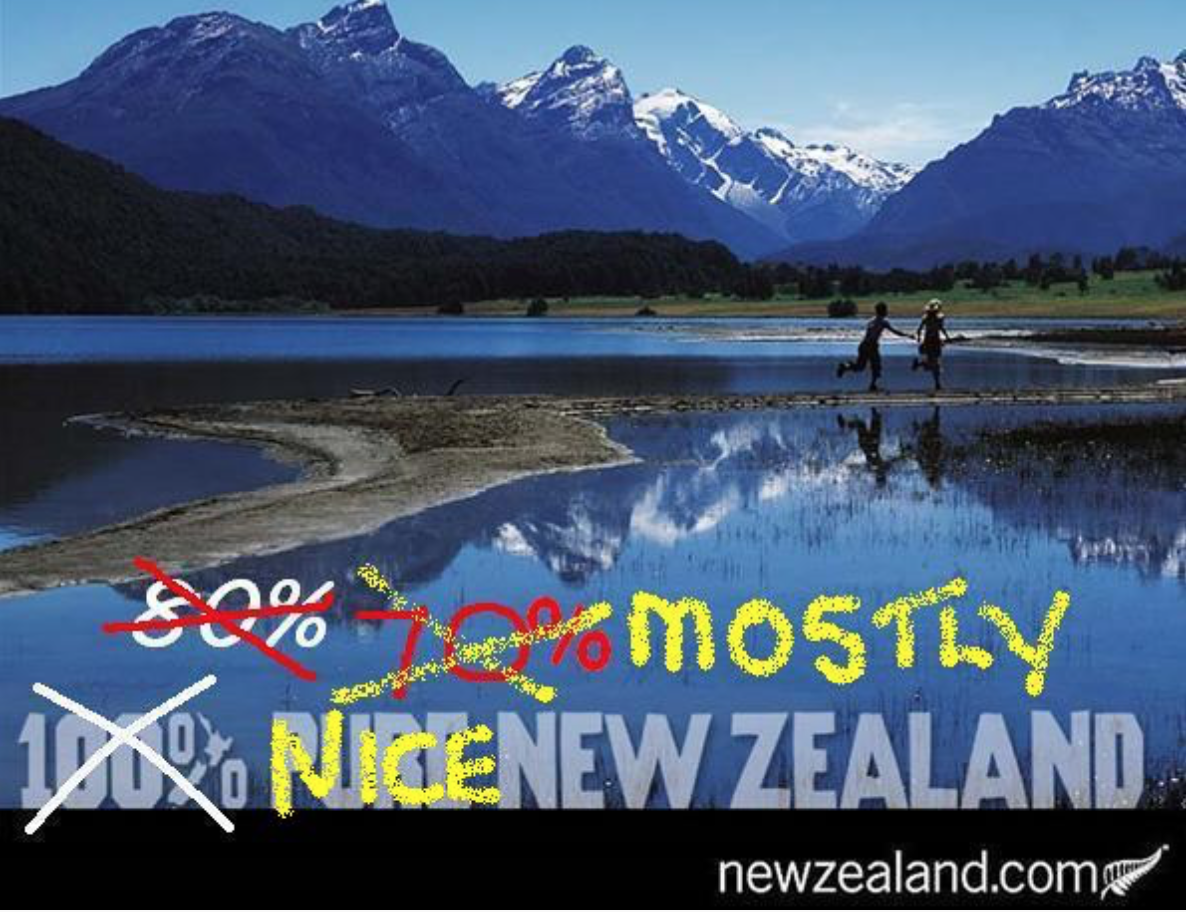 When it comes to irresponsibility and incompetence, we are well used to National’s performance over the last eight years. Homelessness and rising unaffordability, under-funding in healthcare and education; corporate subsidies; wasting taxpayers’ money on pointless exercises; increasing environmental degradation; uncontrolled migration to prop up a lack-lustre economy; and more scandals than we can recall – are National’s track record since 2008.

Up till now, National’s ineptness has impacted only on New Zealanders.

But not content with policies that have impacted harshly on a wide sector of the local population, National has now set its sights on how to screw up  visiting tourists;

While concerns grow about the health of New Zealand’s waterways – including the potential for reputational damage – it has not changed the way the country presents itself to the world.

The latest “100% Pure” campaign, released last week, shows a tourist drinking water from a river, something that would be dangerous in parts of the country.

Tourism New Zealand is a government-owned and operated Crown Entity;

Tourism New Zealand is a Crown Entity funded by the New Zealand Government and established under the New Zealand Tourism Board Act 1991. We are led by a Board of Directors appointed by the Minister of Tourism and have a team of around 150 staff in 13 offices around the world. From humble beginnings, we are now the oldest tourism marketing department in the world.

The current Minister of Tourism is Paula Bennett. The same Minister who once advocated contraception for beneficiaries as some kind of ‘cure’ for sole-parenting.

A major aspect  of Tourism NZ’s advertising campaign involves the “100% Pure” theme – a claim largely ridiculed and dismissed by most New Zealanders as a bad-taste joke;

Interestingly, whilst the woman in the image is depicted as scooping up the water and raising it toward her face, the video switches scene before her hands reach her face.

Obviously the producers of this video were not prepared to risk the woman’s  health by actually expecting her drink the water.

Many of New Zealand’s waterways are polluted to varying degrees by urban and dairying run-off. In 2013, the Environment Ministry reported that 61% of monitored rivers in New Zealand were unsafe for swimming. Waterways were either “poor” or “very poor” quality.

Drinking  water from our lakes, rivers, and streams is a hazardous activity in 21st Century New Zealand. There is the risk of  infection; serious illness, and perhaps death from toxic algae, giardia, e.coli, campylobacter, etc.

Statistics NZ has a convenient map of e.coli levels throughout the country;

Most New Zealanders are now aware of the serious health-risks posed by our polluted waterways – especially as urban populations and  dairy farming has increased  in the last nine years.  We have people like Dr Mike Joy, Massey University’s freshwater ecologist, to thank for breaking the silence on our polluted waterways;

Dr Joy’s  revelations were unpopular with many in the business world and right-wing politics. People like National Party supporter and corporate lobbyist, Mark Unsworth,  bitterly attacked Dr Joy in a vitriolic email in November 2012;

Dear Dr Joy
Is your ego so great that you feel the need to sabotage all the efforts made by those promoting tourism in NZ because of your passionate views on the environment ?
You have the right to hold strong views but you ,as an academic whose salary is paid for by others taxes, must also act responsibly .
Letting your ego run riot worldwide in the manner you did can only lead to lower levels of inbound tourism.

You may not care given your tenure in a nice comfy University lounge ,but to others this affects income and jobs.
Give that some thought next time you feel the need to see your name in print in New York .And possibly think of changing your name from Joy to Misery-its more accurate
Cheers
Mark Unsworth”

Even our former esteemed Dear Leader, John Key, was dismissive of the scientist’s warnings;

“He’s one academic, and like lawyers, I could provide you another one that’ll give you a counter-view.”

Since then, the demonisation of Dr Joy has been replaced with understanding and acceptance. Like climate-change, river and lake pollution will not conveniently ‘go away’ if we ignore it. The consequences of ignoring the problem will be severe for us, and the environment, as the OECD warned us just this year;

New Zealand’s environment is under increasing stress due to an economy reliant on primary industries, the Organisation for Economic Co-operation and Development (OECD) says.

It appeared to be resulting in environmental trade-offs, which put the country’s “green” reputation at risk, it said.

In a just-released report, the OECD urged New Zealand to come up with a long-term vision to transition to a greener, low-carbon economy.

New Zealand’s environment is under increasing stress due to an economy reliant on primary industries, the Organisation for Economic Co-operation and Development (OECD) says.

It appeared to be resulting in environmental trade-offs, which put the country’s “green” reputation at risk, it said.

In a just-released report, the OECD urged New Zealand to come up with a long-term vision to transition to a greener, low-carbon economy.

It detailed the environmental impact of farming intensification, and warned freshwater pollution would continue under current economic growth plans.

New Zealand’s nitrogen balance had worsened more than any other OECD country between 1998 and 2009, primarily due to farming intensification.

Unfortunately, the best efforts of the Green Party to turn back the tide of water-pollution has often been stymied by intransigence and self-interest in  Parliament.

In October 2012, Green MP Catherine Delahunty’s private member’s bill – Resource Management (Restricted Duration of Certain Discharge and Coastal Permits) Amendment Bill – was drawn from the Ballot. The Bill would have reduced the amount of time that discharges could be made into our rivers “in exceptional circumstances”. (Yes, industries are allowed to discharge waste into our waterways! Who knew!?)

As reported in the NZ Herald in October 2012;

Green MP Catherine Delahunty said her member’s bill, which has passed its first reading, sought to close a loophole in the Resource Management Act that allowed contaminating discharges with toxic effects and discolouration of waters under “exceptional circumstances”.

Ms Delahunty said the phrase included no timeframe, and had been used to justify long-term pollution of some waterways and coastal areas.

Her bill would limit its use to five years.

This means that a company such as Tasman Pulp and Paper Mill is legally entitled to continuously dump pollutants into the Tarawera River in the Bay of Plenty. The rationale is that the mill hires local people, so pollution is a “necessary evil”. (Ironically, the products are then shipped back to Norway, which also portrays itself as “clean and green”.)

The Tarawera River’s nick-name is “The Black Drain“.

So our rivers and lakes will continue to be fouled by agriculture, dairying, industry, and urban activity.

Meanwhile, a government Crown Entity blithely produces and promotes a video depicting a woman drinking from one of our waterways.

What tourists don’t understand is what may be lurking up-river, just out of sight around the next bend;

Note the brown stain flowing from the cow.

Now look at what National, via Tourism NZ, is promoting as safely drinkable.

New Zealand should post a Health Warning at every airport terminal.

Preferably before someone gets seriously ill. Or dies.

Green Party:  The Taniwha of the Tarawera

New Zealand – we’re in the sh*t

TDB Investigation into what is happening in our water