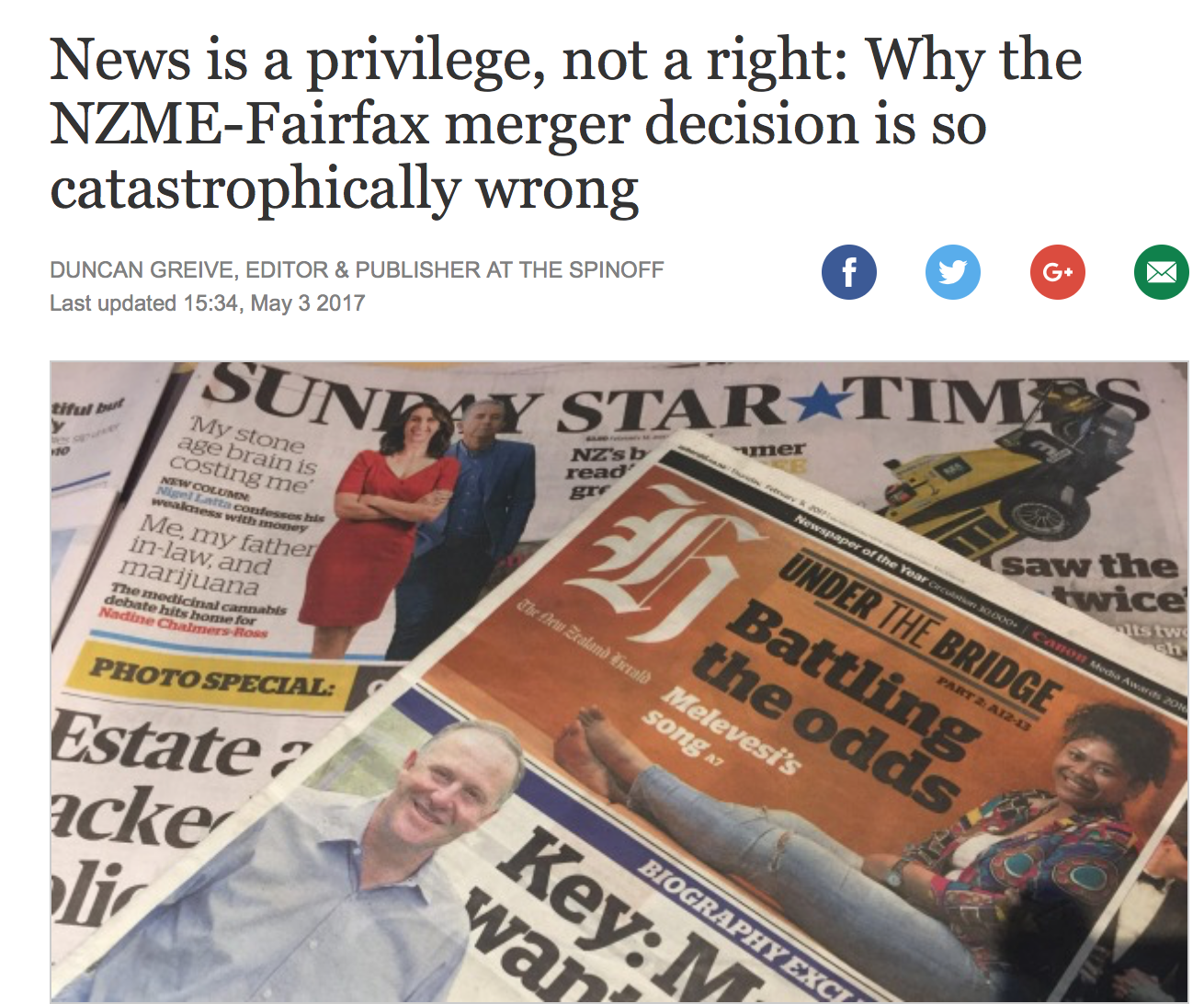 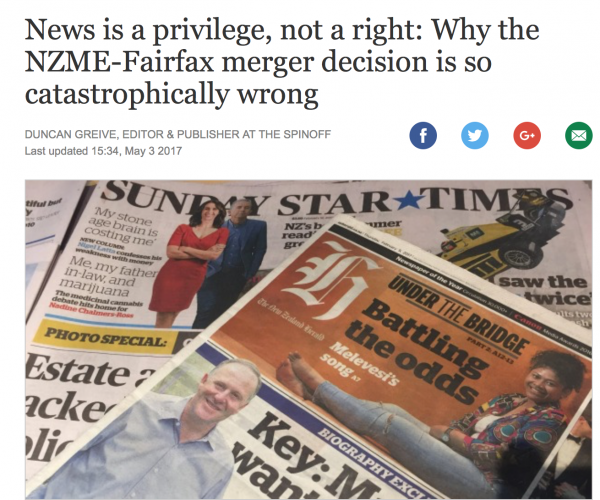 Under a NZME-Fairfax merger one media conglomerate would wield unassailable national power.

Economically, they would control half of the commercial radio market, nearly 90 per cent of daily newspaper circulation and most on-line traffic to on-line sources of New Zealand news.

Politically, substantial  control over the national news agenda would reduce the range of viewpoints available on major public issues. In the daily press it would be quite easy  to run a single editorial  line in the lead up to an  election or during the formation of a new government.

The  Commerce Commission blocked the proposed NZME-Fairfax merger  largely on these grounds.

Their Executive Summary  states that a merged entity would have `the scope to control a large share of the news consumed by a majority of New Zealanders`.

This eventuality, it says  `creates a real risk of harm to New Zealand`s democracy and the new Zealand public`.

Predictably, opposition to the Commerce Commission`s decision came from Fairfax and NZME; their own submissions had argued strenuously for a merger go-ahead. Accordingly, the New Zealand  Herald`s May 5  editorial  was entitled `Blocking this merger is a big mistake.`

Less predictably, Duncan Greive on `Spin-Off` was even more virulently opposed to the Commerce Commission`s decision.

I expected a more considered argument from an on-line magazine which is said to employ `some of New Zealand`s best non-fiction writers  to create smart, shareable content`.

Let’s start with the title of this piece- `News is a  privilege not a right: why the MZME-Fairfax  merger  decision is so catastrophically wrong`.

Now if `news`  as a form of information is, in fact, a `privilege` then it can`t be universally available.

It belongs to some people but not to others.

From this perspective, the news media cannot  have a democratic function because  it doesn`t produce public information.

In the article  Grieve claims not  to be  against the public good argument but maintains  that ` in the commercial world [news] will only be made so long as it can consistently turn a profit`.

He claims that the Commerce Commission has erred catastrophically by  not understanding this.

There are two related misunderstandings here. Firstly, the Commerce Commission is not required to evaluate the commercial pressures on news production, its purpose is to assess restrictions of  competition within and across media domains.

Secondly, if the preceding observation is correct then the Commerce Commission should not be held culpable for the financial and commercial difficulties of media corporations.

Like all opponents of the merger Greive argues (correctly) that Google and Facebook are drawing advertising dollars away from mass media organizations ,especially newspapers and magazines. Once again, however, the Commerce Commission cannot be blamed for not addressing the trend, it is not in their legal remit to do so.

In my view a separate internationally supported  initiative is required to tax and regulate the social media behemoths.

Greive`s understanding of the relationship between news journalism  and the commercial reality of media corporations is misconstrued.

He declares that `job losses are inevitable and will in my opinion be far larger and more destabilising than had they happened in a controlled style in a merged entity`.  In fact major job losses in New Zealand and Australia  have already occurred within APN News and Media, NZME and Fairfax.

Newsrooms have been hollowed out or dismantled  as remaining journalists are expected to produce stories across multiple platforms. A merged entity would  have expedited this process as news gathering and news became further rationalised.

The provincial press would have been in grave danger under a merged entity as indeed it still is.

Anyone who doubts this analysis should read, free on the web, the last five New Zealand media ownership reports produced by the (JMAD) research centre  which I co-direct. (Journalism Media and  Democracy).

These reports, authored by Merja Myllylaht, also detail a major shift in the commercial reality of New Zealand media corporations (including Fairfax, APN News and Media and NZME).

In short, listed and unlisted financial organisations have become dominant shareholders. From 2010 to 2012 within APN News and  Media  (NZ) financial institutions increased their control over total shareholdings from 22.6 to 55.6 per cent.

Over the same period Fairfax`s Trade me was divested to financial institutions.

From 2014 to 2016 all of New Zealand`s largest media companies (including Sky and Media Works) were predominantly owned by financial institutions.

This kind of media ownership is systematically destroying journalistic and newsroom culture.

The critical point here is that Fairfax and NZME are still profitable, they have problems but they are not basket cases. Financial  owners however are fixated on the rate of profit rather than general profitability. So, while it is true that Fairfax and NZME are adversely affected by the growth of digital news consumption and the migration of advertising spend to social media  that is only part of the story.

Greive  ignores the fact that financial institutions have imposed their own commercial reality onto news media organisations. Needless to say, none of this is  the fault of the Commerce Commission.

I rest my case.