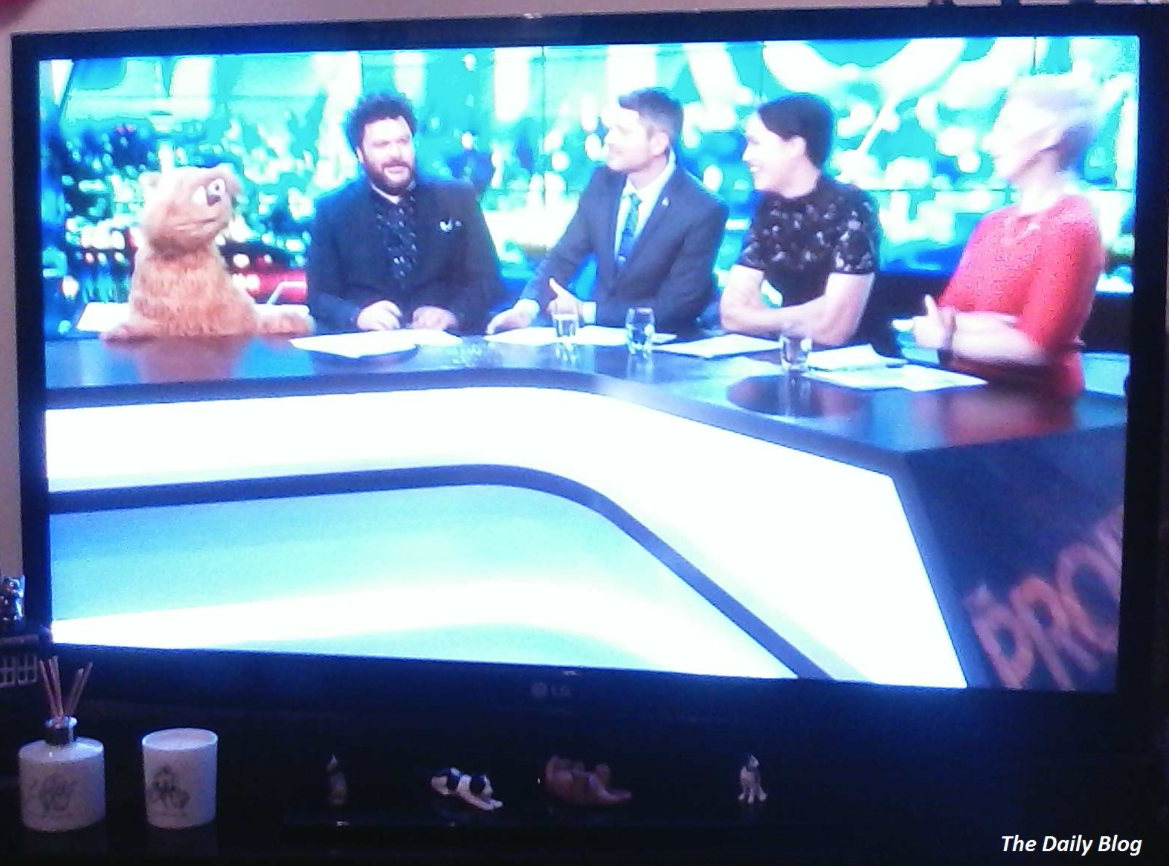 “TV3 have attempted to make current affairs for people who listen to the Edge, the problem is that generation doesn’t watch TV. So TV3 have alienated Gen X and Boomers who want actual current affairs at 7pm to gain a generational audience who don’t bother with the platform TV3 are using.” – Martyn Bradbury, 26 March 2017

I don’t often comment on other bloggers who have contributed a piece for The Daily Blog. Ninety percent of the time, my ideals, values, and beliefs are  muchly similar to those expressed by others on this forum.

Martyn Bradbury’s piece on   “The Project meltdown“ raised a point that has been on my mind since I saw the very first ‘Project’ billboard in Kilbirnie, Wellington. Waiting patiently at the lights, my gaze wandered over to the billboard on my hard right (metaphor?);

The Billboard was situated just above clothing bins where unwanted stuff is dumped by people. (Irony?)

At first, I was stumped. I couldn’t work out what ‘The Project’ or the logo, ‘+HR=E’ was supposed to signify. My first impressions were that it was promoting a new New Zealand comedy movie. Or a novel, upmarket chain of childcare centres was entering the country. ‘+HR=E’ would be a pretty nifty corporate logo for the latter. ‘+HR=E’. Three year olds. Geddit?

A few moments later, as the lights were still red,  I noticed the blurb “News delivered differently” and “Weeknights 7pm”, and then it dawned on me. It was Mediawork’s latest effort to wrest primacy of the 7pm timeslot from ‘Seven Sharp’ and ‘Shortland Street’.

The lights turned green, meaning my *facepalm* moment had gone and I kept both hands gripping the wheel as I mercifully left the scene of the Braindead Zone I had stopped in.

My thoughts turned to another image I remembered from Google Images;

From sombre anchormen (and they were all men during Phillip Sherry’s time at the NZBC), to… muppets.  Yes, really, muppets. ‘The Project’ has muppets on its set. Here’s the evidence, from an episode on 4 March 2017;

Let’s play a game, children… see who can spot The Muppet.

Ok, it’s probably this one;

Now, I’m not suggesting for one micro-second that we return to the era when our NZBC was practically an off-shoot of the 1950s-version of the BBC.

But Mediaworks already had a well-recognised, well-respected ‘brand’ in the form of TV3’s ‘Campbell Live‘. It was solid journalism covering a wide range of stories, from the sombre and thought-provoking to the occassionally light and frothy.

Its in-depth coverage the  GCSB Bill, and the Ian Fletcher scandal  in 2013 and 2014 were perhaps one of only two serious media  analysis (the other being Radio NZ) of National’s widening of the surveillance state in this country;

‘Campbell Live’s‘ on-going investigation of  post-earthquake events in Christchurch also raised new standards of journalism, as well as nationwide consciousness of events and on-going problems in that stricken city.

Indeed, John Campbell and his talented team at TV3 were so successful at raising public awareness on the GCSB issue that it provoked our former-Dear Leader Key to respond in his usual trivialising, shoulder-shrugging, *meh*-sort of way;

Jessica Wright: “How do you think that Kiwis feel about the bill?

Despite ‘Campbell Live‘ rise in ratings, it was insufficient to save the programme from it’s apparently pre-determined doom.  It was soon followed by the jaw-droppingly  inane New Zealand-version of  ‘Come Dine With Me‘;

By sheer coincidence the producer of ‘Come Dine With Me‘ was  none other than Mediawork’s Board Member, and unReality TV porn-purveyor, Julie Christie.

When Mediaworks axed ‘Campbell Live‘ in May 2015 – most likely at the behest of corporate head-kicker Mark Weldon, aided by his trustee henchwoman, Julie Christie – they opened a can of worms.

There were (unsubstantiated) rumours that Key had contacted Weldon, demanding that Campbell be gotten rid off.

The short-lived garbage  that was ‘Come Dine With Me‘ was considered unappetising by the viewing public, and was quickly canned after only two months. It was followed by ‘Story’  in August 2015 but seemed not to engage viewers. The last chapter of ‘Story’ was broadcast in December 2016.

Now we have ‘The Project‘.

Firstly, I have no idea where Mediaworks execs get their ideas from or why they think that something as vacuous as this programme would appeal to the public.

As “Bomber” Bradbury succinctly put it;

“TV3 have attempted to make current affairs for people who listen to the Edge, the problem is that generation doesn’t watch TV. So TV3 have alienated Gen X and Boomers who want actual current affairs at 7pm to gain a generational audience who don’t bother with the platform TV3 are using.”

Regardless of their politics, these were dedicated journalists who we could rely on to ask the questions that we ordinary Citizens were rarely in a position to do. They were persistent. They asked the hard questions which demanded answers and in doing so, challenged those in authority.

That is the purpose of journalism.

I can’t speak for all Babyboomers (of which I am a member of that privileged demographic), but I want my current affairs and news more like BBC/Al Jazeera/Radio NZ/CNN/etc instead of this;

I want to see this;

And most certainly not this;

Next, the number one rule in business is;

#1 The customer is always right

The second rule is;

That rule may not always apply. If a customer requests cyanide in their latte, that request can be rightly declined (or not, depending on what is clearly stated on the menu board).

Aside from issues of life and death, public morality, and physical/biological impossibilities, the customer (in the form of the Viewing Public) is always right when it clearly expressed a desire to keep ‘Campbell Live‘ very much alive. So, how right was the  customer?

According to comparative ratings, approximately 186,830 customers were very much right. They “walked” from TV3, en masse. Consider me one of them.

Instead of telling us, the viewers what we want to watch, perhaps Mediaworks should have listened to us in the first place. Businesses that turn a deaf ear to their customers usually end up like this;

If Mediaworks is attempting to cater to Babyboomers, then shite offerings such as ‘The Project‘ will not cut the mustard. It is a pale, immature, sickly parody of professional journalism. What else can you call something that is fronted by people whose day-jobs are comedians? (Though, to be fair, Jesse Mulligan and Josh Thompson are pretty damned good comedians. I’ve enjoyed watching their gigs on ‘7 Days‘.)

It is an insult to my intelligence.

It is an insult to the intelligence of every person who has grown up (or not) watching real journalism, covering real stories, in a real, professional manner.

To be blunt, Mediawork Execs, if you can’t cobble together credible meaningful journalism for your 7pm timeslot, just repeat F.R.I.E.N.D.S or M*A*S*H* or anything else with excessive punctuation marks in the title.

Or just show this;

Add a bit of background elevator-music and you’re sorted.

Or, you could try something Different/Not Different. Hire a bunch of the most respected, experienced, capable journalists; resource them properly; and give them sufficient editorial-independence to do their jobs properly.

Guarantee them security from interference by the Mark Weldons and Julie Christies of the world.

Spend money on promoting the product. If Mediaworks can spend millions promoting ‘The Block‘, ‘The Batchelor‘, ‘The Project‘, and other programmes of dubious value – then it should be able to promote a serious, flagship current affairs programme.

Treat the viewing public with respect.

That is how a business succeeds.

It’s not that hard. Does it really have to be explained?

Scoop media: The GCSB Bill – We at least have to try

Fairfax media: MediaWorks boss – Project is here to stay and will win the ratings war

The Daily Blog: The Project meltdown – when Executives come out to support your 7pm Show, that’s when you know you are in trouble

The Standard: I want that left wing bastard gone