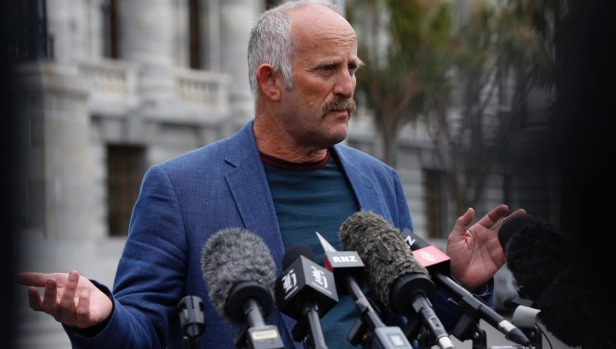 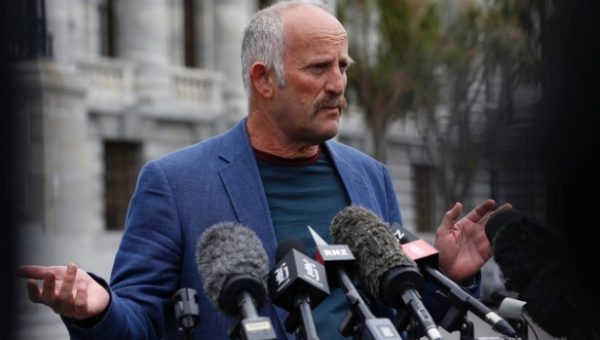 Gareth Morgan’s knees are hurting. I can tell because he keeps bending down to rub them- and it is no wonder, he has been on his feet since 4pm and it is close to 9pm before he gets a chance to sit down and sink his teeth into a burger at Christchurch’s Smash Palace.

Morgan is here as part of a roadshow to win hearts and minds- well maybe just minds, as he does not seem to do the hearts bit very well.

His approach is: here’s what I think, take it or leave it. No passion, no fire, no galvanizing, no sleek speeches, no appeal to organizing, no sense of urgency, no…nothing.

Part of me thinks that is okay because people are tired of showmanship and spectacle and Morgan’s unrefined and laid-back style is actually quite endearing.

Morgan’s first stop in Christchurch was at The Piano where 250 people gathered to listen to him talk mostly about his newly announced UBI policy, the last of The Opportunities Party’s (TOP) seven policies.

It is of course not surprising that Morgan has saved the best to last.

TOP’s UBI policy is likely to be popular and is easy to understand (unconditional basic income to all families with children under 3 years of age).

TOP’s Tax policy requires people to understand, amongst other things, that when they live in their own homes, they are in effect their own landlords- and that, not paying tax on their “imputed rent”, is an unfair advantage that favours homeowners and shifts investment away from productive assets.

The social harm arising from policies that encourage speculative investment is, of course, real but is not an easy concept to understand, or sympathized with, especially when it is explained by a multi-millionaire who has no reason to panic at the thought of more money disappearing from his pockets.

Most people see TOP’s Tax policy as a policy that will cost them money, despite Morgan’s reassurances that 80% of them will get their money back in the form of lower income tax. As for the other 20%, Morgan says they can afford it and should pay.

As part of his argument, Morgan keeps telling people that they have to care for New Zealand more than they care for themselves and their immediate families, forgetting that the two are not exclusively mutual.

So, by caring about a fairer, more equal New Zealand, we are indeed caring for ourselves and our families.  This is an important message that TOP needs to make clear to their potential voters.

Another issue worth mentioning is Morgan’s response to my question around the sustainability of a growth-based economy.

Morgan seems to think that a growth-based economy is sustainable if it was coupled with the right ecological investments.

This view is at odds with the opinion of Professor Tim Jackson who, only last month, stood on the same stage to deliver a lecture on prosperity without growth.

Professor of Sustainable Development at the University of Surrey, Jackson refers to Morgan’s idea about the sustainability of a growth-based economy, as “wishful” and “magical” thinking.

Jackson explains “prosperity isn’t just about earning more and having more, it consists in our ability to participate meaningfully in the life of society.”

To be fair, TOP’s chief of staff, Geoff Simmons, hinted at better ways of measuring growth than just looking at the GDP but what is clearly missing from Morgan’s suit of policies is a policy directed at social psychology of consumption.

As Professor Jackson put it we have been persuaded “to spend money we don’t have on things we don’t need to create impressions that won’t last on people that we don’t care about”. This sad story of status-seeking consumption has also been narrated by plenty of artists through contemporary art. For good examples see Banksy – Jesus Christ with Shopping Bags, 2005 and Barbara Kruger – Untitled (I Shop Therefore I Am), 1987.

Clearly, we need policies around responsible advertising, social investment, development of public spaces (a missed opportunity in Christchurch) etc., to move us closer towards a new vision of prosperity.

After his talk at The Piano, Morgan came to Smash Palace to visit us at the Tuesday Club- my favourite intelligentsia hub in Christchurch run by the former mayor Garry Moore.

There at the club, an attendee asked Morgan to describe, in 5 words only, what he had that would make us vote for his party on the election day.

Morgan said he would say it in 3 words: “A Business Case.”

I wish he had used his 5 words and said: A Social Case For Change.