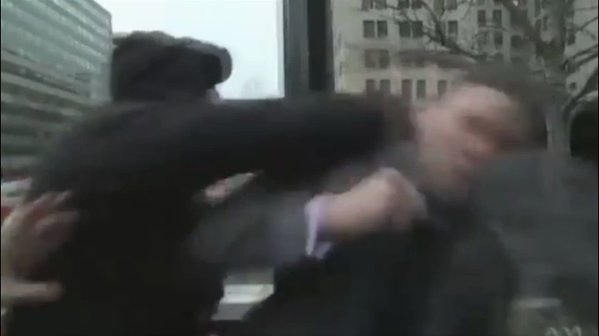 There is a lot of crying out now about ‘fascism’ with the ascension of Trump. Trump may be a crypto-, neo-, semi-, proto-fascist leader, but as yet he is not the head of a fascist movement nor in charge of a fascist regime. In order to fight and defeat fascism it is necessary to know what it is.

Let’s be clear, fascism is the last resort of finance capital fearing its overthrow by a revolutionary working class. It is the last resort because everything else has failed. It is not an option taken lightly because it risks a civil war by unleashing the angry middle class and misguided workers into a paramilitary movement that become shock troops to smash the revolutionary proletariat. And all wars the capitalists unleash risk the working class winning.

So it is only justified when angry workers are rising up against the state that protects capitalist property and power and no longer accept the bullshit that the ruling class are their class mates. At that point the workers become class conscious and a force capable of overthrowing the whole system. Moreover they can rally the angry petty bourgeois to the revolution by proving that they are powerful enough to overthrow capitalism.

The lesson of the successful Soviet revolution proved that the unity of workers and petty bourgeois against the bourgeoisie was necessary and possible. Against that real threat, fascism is all that is left to defeat the revolution. So the ruling class anticipates the danger, and rallies the discontented petty bourgeoisie and unemployed workers to defend the nation from communism by appealing to a rabid racist nationalism to wipe out the communist party.

That is why fascism first arose in 1920 in Germany and Italy, long before the Nazi rise to power. It was the last resort to smash revolutionary uprisings coming out of WW1. In 1919 an armed workers and soldiers revolution was underway in Germany. The ruling class tried to pacify it by deposing the Emperor and creating the Wiemar Republic in which the Socialist Party was a leading party. But this failed to head off armed uprisings all over Germany. The counter-revolution succeeded only when the Socialists handed over the leaders of the Communist Party to the fascist gangs who murdered them and dumped them into a canal.

In Italy in 1919/20 workers rose up in the North and the threat of revolution sparked the formation of a fascist movement. That movement then systematically destroyed the communist organisations and saw Mussolini take power. Those who know Bertolucci’s 1900 saw these events graphically recounted.

While these revolutions were smashed by fascism at its birth the proletariat remained a threat to the ruling class, especially with the failure of the imperialist powers to defeat the Russian revolution in the brutal civil war. Fascism was then the necessary resort of finance capital in Europe to remove this threat. That is why the Nazis came for the communists first.

In the US and in Britain there was a fascist fraction of the ruling class ready to step forward if the proletariat was not pacified by emergency economic measures to deal with unemployment such as the New Deal. Had workers refused to submit to appeals to racism and national chauvinism and overcome the divisions in the labor movement, thrown out their rotten labour ‘lieutenants’ in the unions, and united to pose a threat to state power, the bosses would have quickly resorted to mobilising their fascist shock troops.

As it happened, in both Britain and the US, the working class was incapable of rising to the occasion for several reasons. Most important, the Soviet state, now isolated and under siege, was taken over by the Stalinist bureaucracy that neutered the Communist Parties around the world into agents of Stalin’s foreign policy of appeasement. Without a revolutionary party, US and British workers lacked the leadership and program to unite and fight for socialism. So the threat of revolution never arose to justify a a resort to fascism. Such was the power of the appeal to national chauvinism against any ‘communist’ threat that the surviving revolutionaries succumbed to national chauvinism and actively encouraged workers to fight ‘fascism’ as the worst enemy, and let their imperialist ruling classes off the hook.

In the US today, the conditions necessary for the resort to fascism are yet to materialise. The working class is divided, and misled by politicians, media and union bosses into backing rival boss parties. There is no independent Labor party let alone a revolutionary communist party. It is finance capital behind both boss parties, Republicans and Democrats, that is setting the agenda not a militant workers party. That is why Trump’s regime is as yet no more fascist than the Bush or Clinton regimes.

Trump inherits a failing imperialist state that can only survive by making the working class pay for the crisis of falling profits by further job losses and falling living standards. His promises to deliver jobs and restore America to ‘greatness’ are futile as he faces an inevitable world-wide slump and a drive to inter-imperialist war with China and Russia for control of the remaining global resources.

The working class is currently divided by ethnicity, nationality and gender, and Trump is feeding these antagonisms to prevent the class uniting as one multi-ethnic and multi-gender force for change. Only if he fails to impose the program of finance capital driving workers into more wars, so that workers overcome their divisions, and form a mass workers party with a program for socialist revolution, will Trump find it necessary to resort to fascism. Only then will he be forced to rally his shock troops to destroy the leadership of the workers’ movement.

That is why it is necessary now to build workers’ unity and reject pacifist appeals to non-violent resistance. History proves it is necessary to organise an armed defence against the rise of fascist gangs. Because if fascism is allowed to grow it is a mortal threat to the existence of a revolutionary class, and hence to the existence to the human race facing climate catastrophe, all attempts to mollify or placate fascism, to pass laws against it, or to rely on the state forces including the police to stop it, are futile.

For workers as a class, democratic rights are subordinated to advancing the struggle for revolution. These and are not abstract ‘rights’ that must be accorded to all and sundry willy nilly. Revolutionaries advocate ‘no platform’ for fascists because they use their ‘right’ to demand the death of militant workers, especially the revolutionary leaders who are always the first to be assassinated. Revolutionaries confront fascism with overwhelming force whenever it raises is filthy head.

Not to do this, to attempt to ‘reason’ with fascism for fear that arming workers would confirm the ruling class bogey of violent revolution, only feeds fascism. The ruling class is armed to the teeth and will use these arms ruthlessly whether workers are armed or not. In every situation where workers were not armed or were not organised into defence militias, fascism has destroyed them.

While it is true that fascism is the last resort to smash proletarian revolution, submitting to pacifism is to die on our knees. Armed resistance is necessary to defeat fascism and to make that revolution possible, freeing humanity from the scourge not only of fascism but of the capitalist sewer that gives it life.