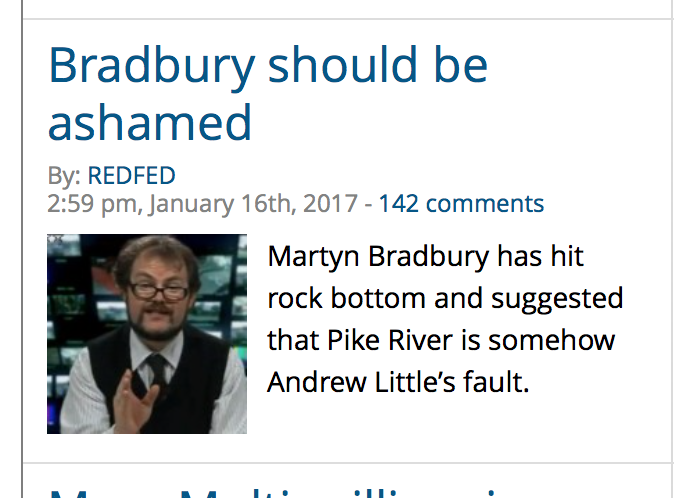 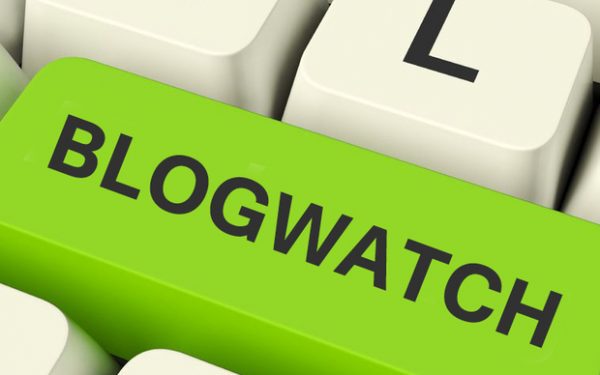 I’ve managed to annoy the sad old Standard and the weird old Whaleoil in the same week.

I must be doing something right.

Weird old Whaleoil visited some alternate reality to report that because I had mentioned the word ‘riot’ in a  blog that I was being literal and not figurative.

Just consider the hateful, disgusting things that Cameron Slater has said and done over the years…

Remember when Slater published falsified SIS info to smear the leader of the opposition months before an election in a dirty smear campaign that originated out of the PMs Office?

Remember when in Dirty Politics Slater is alleged to have blackmailed Rodney Hide into standing down?

Remember when in Dirty Politics Slater is alleged to have trawled brothals for dirt?

Remember when in Dirty Politics Slater hacked into and downloaded the Labour Party website?

Remember when in Dirty Politics Slater crucified public servants and scientists who criticised interest groups he was being paid by?

Remember when in Dirty Politics Slater was trying to attack the head of the SFO?

Remember when Slater called a person who died in a car accident ‘feral’.

Remember when Slater described a Kings student who drank himself to death as “a toffee-nosed school boy, a dead thief and a liar who couldn’t handle his piss. I always said King’s boys were poofs.”

Remember when Slater published all the details of businessman Matt Blomfield whose stolen computer he somehow obtained? Remember how Matt Blomfield then had someone turn up at his house, shoot the house and beat him in front of his family?

Remember when Slater tried to insinuate that Tania Billingsly tried to get sexually assaulted on purpose to claim rape culture?

Remember when Slater, after attacking name suppression, then used it to hide from publicity of a criminal case against him?

Remember when he was accused of paying a hacker to hack The Standard?

Cameron, go home champ. No one wants to play with you anymore. 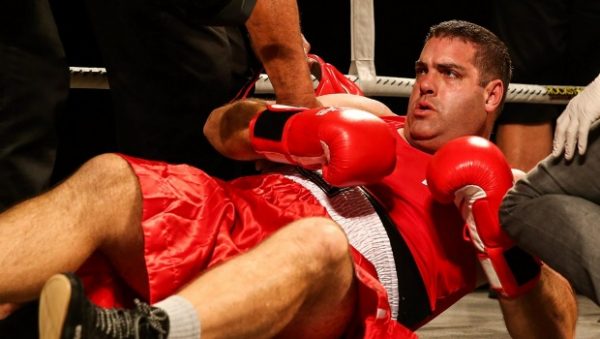 Then there was this wee charmer from the sad old Standard… 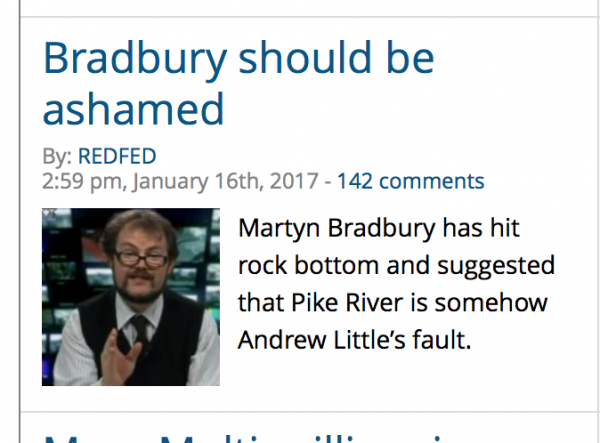 …folks, there are many things I should be ashamed about.

The haircut in that photo.

My weakness for Nickelback and Sinatra songs at 2am Karaoke.

and my near zero interest in most male sport.

Those are things I should all work on because they are shameful.

Pointing out that it was politically stupid for Andrew Little to attack Winston Peters for his Pike River Mine posturing because if Winston wished to he could ask hard questions about Little and the EPMU at the time of the accident however is nothing to be ashamed of at all.

It’s pointing out the bleeding obvious and what any good progressive political blogger does. You’ll see stories and opinions appearing here 2 weeks before they appear in the mainstream media, that’s what political blogs do.

The sad old standard however is as viciously tribal as ever, and while it’s cute like a tired burnt out half blind labrador growling at something it can’t see: when such obvious manipulation is directed at you personally it makes you appreciate how alienating and hollow their values really are. Even their editor, old man Lynn was able to pop on his slippers and jump into the mud pool for a few kicks.

It’s like a website for all the people who couldn’t get Press Secretary jobs in Labour or the Greens. Hack ham actors whose attempts at political pantomime are cringeworthy and desperate rather than insightful.

This is honestly only the second time I’ve even read the standard in 18months.

Let’s rewind here for a second, because people might not understand the order of things.

I blogged on the 15th that Winston was playing clever politics by appealing to the values of Provincial folks by turning up at Pike River Mine and making the pledge he did. Was it political posturing by Winston? Of course it was, but Little’s response was not smart politics.

(Interestingly enough Little announced a sudden visit to the Pike River Mine Families today, so Winston’s gambit clearly DID make some impact).

According to the standard though, for acknowledging that there was criticism from across the political spectrum regarding the way Little and the EPMU handled the event meant that I should be ashamed of myself???

So it was the EPMU that cut oversight, deregulated the industry and created a system where corporate greed was more important than basic safety measures. It was the EPMU’s fault because when they proposed to the workers they should take action about safety concerns they were threatened with being sued. It was the EPMU’s fault that the Government did a deal with Whittall so money would be paid and the case against him dropped.

Bomber has really hit the tarmac on this one. All he is doing is spreading a Cameron Slater slur. Coming from a website that has union sponsorship and support is a disgrace.

He should educate himself by reading up on the subject and understanding why it happened. Not deliver pseudo smart drive by comments blaming the Union for corporate failures.

…how many ways can the standard be wrong in just one blog?

Let me try and answer each one of these questions.

So it was the EPMU that cut oversight, deregulated the industry and created a system where corporate greed was more important than basic safety measures.

It was the EPMU’s fault because when they proposed to the workers they should take action about safety concerns they were threatened with being sued.

It was the EPMU’s fault that the Government did a deal with Whittall so money would be paid and the case against him dropped.

Bomber has really hit the tarmac on this one. All he is doing is spreading a Cameron Slater slur.

4 – Actually, the criticism came against Little and the EPMU from the Marxist and Socialist blogs NOT Cameron Slater. The blog is called, Against the Current. Are the standard trying to claim that Cameron Slater has infiltrated a hard left Marxist blog and seeded this criticism? Is the person who wrote this at the standard drunk?

Coming from a website that has union sponsorship and support is a disgrace.

5 – TDB has a long history of supporting workers and their Unions, and believe stronger unions and universal membership are crucial steps in moving our country forward but we will also critique them when things go wrong and point out the possible blowbacks that might occur when stupid strategy is followed.

He should educate himself by reading up on the subject and understanding why it happened. Not deliver pseudo smart drive by comments blaming the Union for corporate failures.

6 – This is the funniest one, the writer CLEARLY had no idea whatsoever about what the Marxists had to say about the EPMU and Andrew Little (just like the Wellington Twitter elite didn’t know either). Even more embarrassing, when people at the standard started pointing this out to the writer in the comments, they just go silent.

I get that we on the Left are a passionate folk, but the amount of lies and outright deception and manipulation that the sad old standard has embarked upon here to personally attack me only serves to remind those taking note just how much their alienating tribalism is part of the reason the Left are not in Government. 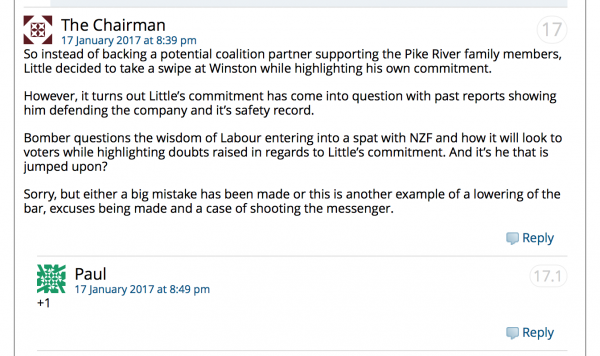