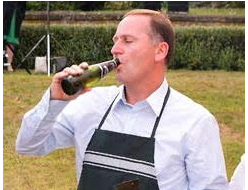 As the mainstream media go into collective shock as their Political Master announces his resignation, many of his corporate media pundits are quickly painting his 8 years in power as some of NZs greatest years.

Firstly, no one yet knows why Key is making this shock resignation. He’s given his colleagues a weeks notice and has walked off. Let’s wait and see what drops around the middle of next year to fully appreciate what’s happening right now before we start accepting a varnished history.

Secondly, middle class corporate pundits who never faced the harsh end of his draconian welfare reforms have any validity in lauding Key.

Big business, bankers, farmers and property speculators will shed tears at Key leaving, those who have had to bare the brunt of his idealogical beatings won’t.

Key leaves us as he started, a laid back anti-intellectual who made NZers feel secure in their ignorance and cultural insecurity. Remove that branding and the National Party are the same born to rule pricks they’ve always been.

National are in deep trouble now.

By leaving with this shock announcement, Key is doing what Key always did, what’s best for Key.

The Listener, ZB and the NZ Herald will enter a 3month morning period.