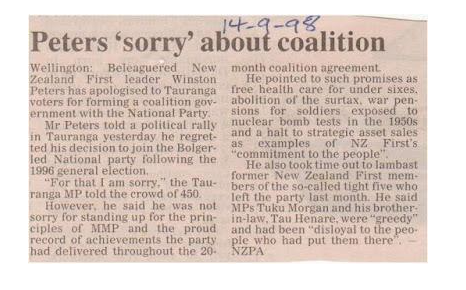 I ordinarily have a lot of time for Frank Macskasy. His pieces are usually trenchantly researched and thorough. On top of that, he was the first journalist to ever give me a proper interview.

But even the best of us have off days. Combinations of preferenced ideological blind-spots and wood-for-trees-ism which mercilessly get in the way of and interfere with the accuracy of our analysis.

And as applies Frank’s piece from earlier this week setting out the rather perilous accusation that New Zealand First is, in fact, ardently neoliberal … that certainly appears to be what’s happened here.

Now don’t get me wrong. I am not saying that the material Frank quoted was either inaccurate or wildly out of context. It wasn’t. Winston, while in government with the National Party from 1996-1998, wound up backing and supporting principles and policies which might fairly be regarded as almost the complete opposite of what our Movement was founded to propound all those years ago in 1993. Probably the biggest clanger is something which Frank hasn’t directly referenced – Winston’s in-public support for the privatization of a state asset (namely, the Auckland Airport).

But we all have pasts – particularly those of us who’ve effectively spent something like forty years straight in politics – and while previous actions can be quite instructive in helping us to understand where someone’s come from … I find myself customarily FAR more interested in what they’re doing now (or, for that matter, over the last ten to twelve years) as compared to what they were doing quite literally almost twenty years ago.

This is where Frank’s analysis falls down.

Nobody – other than the most diehard and counterfactual pro-NZF zealots – would sincerely seek to argue that National-NZF ’96 was a good idea. Or anything other than a horrible, right-wing inflected disaster. Winston himself, and to his credit, not only walked out of Government in protest against National’s ongoing neoliberal agenda … but even, later that decade, outright apologized to the nation for ever going into coalition with the Nats in the first place. (As an aside – the journalist who gave me an electronic copy of the newspaper clipping detailing this happening was none other than Frank Macskasy. It is unfortunate that this tangible evidence of reversal of position by Winston was not deemed significant enough for inclusion in Frank’s piece on significant things we did in the late 1990s; presumably because it didn’t easily fit the narrative)

The other points which desperately needed to be included in Frank’s article yet which evidently must have been left on the cutting-room floor include i) our actions in and around government *since* 1998 (i.e. the 2005-2008 co-operation with the Labour Party and even, later, the Greens); and ii) what we’ve done and said both out of Parliament and in Opposition since then.

As applies our record from 2005-2008, the evidence is clear: New Zealand First is no Neoliberal party. Otherwise, why would we have pushed for unprecedented rises in the minimum wage commensurate with a figure of about a dollar per year (and effective scrapping of youth rates)? Why would we have delivered the renationalization of KiwiRail? Or secured a thousand extra front-line police plus three hundred support staff?

There are numerous other examples drawn from that three-year period to cite … but even considered in the most superficial manner, renationalizing assets, raising wages, and pouring vastly more funding into an essential state service (for such the provision of law and order surely is) hardly smack of “Neoliberalism”.

Indeed, given the privatization of assets, undermining of real wages, and slashing of state services are pretty much the sine qua non criterion for a given party or regime being “neoliberal” … I’d even go so far as to say that our more recent Record In Office is tantamount to us being Neoliberalism’s very Antithesis Incarnate.

This trend doesn’t exactly abate during either the Wilderness Years from 2008-2011 (during which time, I joined the Party – because it appeared to be the strongest anti-Neoliberal force available), or for the period running from late-2011 to the present day in which we’ve been back in Parliament.

On issues like the privatization of state assets or the Government and Reserve Bank’s ongoing quixotic obsession with controlling inflation rates at the expense of both currency and unemployment concerns … for the longest time, New Zealand First effectively seemed to be standing alone. I am more than happy to be proven wrong about this, but I don’t seem to recall either of Labour or the Green Party putting forward serious policy nor legislative proposals to comprehensively #Renationalize stolen Kiwi assets, or fundamentally reform the Reserve Bank Act to move our country’s key monetary policy instrument away from the avowedly Neoliberal theoretical underpinnings and preferences which had so deleteriously constrained it for so long.

I do not deny that some of Winston’s rhetoric from 1996-1998 was seriously average … but to ignore all of the above in favour of insisting that a specific interpretation of what he said two decades ago is absolutely and axiomatically what we believe today seems almost scurrilous. Or at the very least rather willfully myopic.

Matters become even worse when we see the oblique comparison between National-NZF on one hand (as the ‘parties of the right’, although the author doesn’t name them as such), and Labour-Greens on the other (as the assumedly anti-neoliberal “left”) towards the end of Frank’s piece.

Certainly, nobody denies that the Green Party are generally pretty good when it comes to advocating for what’s customarily a principled left-of-center and redoubtably anti-neoliberal position. This is one of the many reasons why I keep advocating #BlackGreen2017

Yet I seem to recall a certain co-leader of the Greens making the curious call during the last Election run-up to broadcast the claim that the Greens are allegedly more “pro-market” than National. They actually campaigned on lower company taxes, leaving the regressive GST-levy untouched, and “markets [being] a really good solution to the big challenges”.

According to Frank’s logic of taking quotes from a certain period of a Party’s history, and then applying them at face-value as present-day ethos and proclivity … surely this indicates that the Greens are in the same boat as New Zealand First when it comes to neoliberalism? Perhaps even a bit deeper into the vessel considering the fact that the Norman-quotes come from a mere two years ago, while the Winston-speeches are from twenty?

Further, consider the other party which Frank has identified as being of the (supportable) “left” in this country. Labour. Now we all know what they got up to in the 1980s. I won’t waste half a piece by setting out exactly which still presently serving front-bench spokespeople did seriously, SERIOUSLY neoliberal things during and after Rogernomics. But that was closer in time to Winston’s 1997 misadventures than either set of incidences is to the present day.

And more importantly, if Labour’s severely mixed messages about the Trans-Pacific Partnership Agreement are anything to go by, while New Zealand First has clearly and avowedly left our past mistakes in the rear-view mirror … for the Parliamentary Labour Party, their own egregious missteps appear more a case of “objects in this mirror may be much closer than they appear”.

New Zealand First lead the charge against the TPPA in Parliament. We put forward not one but TWO excellent bills to try and stop the TPPA and its worst effects from being allowed to happen here. In our vision for the future of New Zealand, foreign corporate power should NEVER be allowed to trump New Zealand people power. If that isn’t ‘anti-Neoliberal’, then I really don’t know what is.

Meanwhile, Labour – apart from initiating the negotiations which saw us tied into the TPPA to begin with – found itself embroiled in a serious internal contratemps that saw two out of the last four Leaders of the Parliamentary Labour Party attempting to undermine the current one by outwardly supporting it. The end result of which was that Phil Goff was allowed to vote WITH the Government when it came to matters pertaining to the TPPA – and that’s all stuff which has happened THIS year! (No word yet as to whether Goff will be allowed to deploy similar logic to vote against any legislation to lower or abolish the cost of tertiary education in this country yet, either, given his rather prominent role in establishing university fees here in the first place…)

Now all of this is not put forward out of spite or out of hand. I have no great interest in attacking either Labour or the Greens in this piece. But the plain fact of the matter is that if we apply Frank’s own evidentiary standards which he’s subjected us to, to the two parties he’s quite happy to label as “left”, then we inevitably wind up with a situation wherein they’re attackable under exactly the same pernicious charge of “aiding, abetting and embodying Neoliberalism” as New Zealand First supposedly is.

Or, to phrase it another way – if we are to convict Winston of ‘neoliberalism’ on the basis of a speech made twenty years ago (and disregarding pretty much all the available evidence of his conduct, aspirations and beliefs for much of the two decades since, including the last time we were in/near Government) … then we quite quickly wind up in a thankless and just about impossible situation wherein virtually everybody in or near Parliament ought be rhetorically tarred and feathered for much the same reason. If not outright more ardently, due to the far more recent (in the case of the Greens) and sustained (in the case of Labour) nature of their offending.

In summary – as I said at the outset, I often have considerable time and regard for what Frank publishes. I mean him no disrespect (in fact, quite the contrary) by seeking to engage with, critique, and riposte against his most recent piece.

But while it is probably too strong a term to state that charges of New Zealand First being ‘neoliberal’ are entirely “unfounded” (Frank’s digging up of two speeches from twenty years ago does sort-of put paid to that) … asserting that the present, modern New Zealand First which I joined up to some seven years ago is either i) ‘neoliberal’; or ii) by implication, somehow more ‘neoliberal’ than, say, the Labour Party, makes an utter nonsense of the term.

I could go on at some (even greater) length, but I think the point is made.

New Zealand First has undeniably and unquestionably made some graven mistakes in the past. Many of us are amongst the first to acknowledge this. But we have also made strident and stringent contributions to the political good of our nation – often, although not exclusively, in the field of repealing and rolling back dire neoliberal ‘reforms’ wrought and put into play by parties other than our own.

Going into the 2017 Campaign, you’re going to hear an awful lot of prognostication and punditry about New Zealand First’s likely future prospects and potential political positioning. Much of it will be sensationalized. Some of it will be slanderous. And as always happens, there will be a bevvy of persons erroneously insisting that we’re somehow “right-wing”.

But look to the evidence – ALL of it, rather than piecemeal and cherrypicked slivers from several decades ago – and you’ll quite rapidly start to get a proper picture of who and what we actually are.

“Neoliberal”, whatever the actual meaning and import of the term, would appear to be pretty far down the list of terms which one could feasibly use.