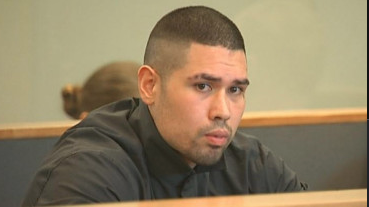 Tony Robertson was sentenced to eight years in prison for indecently assaulting a five year old girl in 2005. He was considered a high risk prisoner and the parole board declined to release him on four separate occasions. He was eventually released in December 2013 at the end of his sentence. Although he was not on parole, he was subject to ‘release conditions’ which means he was on an electronic bracelet for six months.

After five months of relative freedom, he ran over Blessie Gotingco in his BMW, raped her and then stabbed her to death. Former Ombudsman, Mel Smith, was asked to conduct an enquiry to find out what went wrong. His report concluded:

“Robertson, and only Robertson, can be held responsible for what happened to Mrs Gotingco”.

At the same time, Smith made 27 recommendations identifying those areas where the management of high risk offenders such as Mr Robertson could be improved. That’s weird. Corrections did nothing wrong – but here’s 27 things they could have done better. That doesn’t add up does it?

A few of those 27 recommendations related to the pathetic attempts made by Corrections to rehabilitate Robertson. Apparently, he was involved in more than 50 incidents during his time in prison and was classified as a high-risk prisoner. But as Smith points out in his report, high-risk prisoners are not permitted to attend rehabilitation programmes. Robertson also denied he was a sex offender. Smith says Corrections refuses to place such offenders into treatment until they accept that they have accepted their guilt. He came to the conclusion that…

“Robertson stated he is willing to participate with a psychologist, saying ‘I just want to get out of here. I think this will help me with my board hearing’.” Regarding child sex offender treatment, he stated: “I’m willing to participate because of the board… A programme would help because I’ve never had anything [any programmes] before, and nothing else helps.”

Despite this apparent willingness, Corrections did not let him see a psychologist until June 2012, more than 14 months later. They had seven sessions together. Mel Smith wrote:

“The psychologist reported that Robertson was enthusiastic about getting treatment and eager to participate in the sessions. He completed all the activities asked of him between sessions (and) found he had tried to implement suggested behavioural strategies in daily prison life.”

So Robertson wanted help and was ‘enthusiastic about getting treatment’. But after the seventh session, the psychologist recommended a break of three to four months so that Robertson could demonstrate he was able to practice these strategies before scheduling further sessions. Smith then wrote:

“The inquiry could find no record the psychologist or anyone else from Corrections’ psychological services followed up on whether he had succeeded or failed in putting these new skills into practice, or whether he wanted to participate in additional sessions with the same eagerness previously demonstrated. Robertson had no more sessions while in prison.”

So instead of concluding it was Corrections fault that Robertson received so little help, Smith got out a bucket of whitewash and claimed that…

“Corrections made reasonable efforts to … provide him with suitable rehabilitation.”

Based on the information in his own report, that statement is simply not true. Robertson was in prison for eight years and had a grand total of seven counselling sessions. Seven sessions in eight years. That doesn’t add up either, does it?

Robertson is not the only high-risk offender who has not been allowed to attend rehabilitation in prison. Stewart Murray Wilson (referred to by the media as the beast of Blenheim) was a prolific sex offender and was in prison for 17 years before he was released in 2015. He saw a psychologist only four times and Corrections also failed to put him into a sex offender’s programme because he denied his offending.

Graeme Burton (right), a known drug addict, was in prison for 13 years, but was never required to attend drug treatment, either in prison or on release. Six months after he was released in 2006, he killed Karl Kuchenbecker. The then chief executive of Corrections, Barry Matthews had the gall to declare “There’s no blood on my hands”.

William Bell (left) is another drug addict and high-risk offender who never attended any rehabilitation. A few months after he was released in 2001, he murdered three people and left Susan Couch with permanent injuries. Corrections tried to avoid taking any responsibility for anything, but ten years later accepted that they had failed to monitor Bell properly in the community and paid Susan Couch $300,000.

Blessie’s husband, Antonio Gotingco, seems to be following in Susan Couch’s footsteps. He wants to sue Corrections for its poor management of Tony Robertson and has started a Givealittle page asking for donations. Maybe that will add up to something (currently $93,000). If nothing else, perhaps it will highlight the need for Corrections to take more responsibility and accept that high risk offenders like Tony Robertson, Graeme Burton, William Bell and Stewart Wilson need to attend rehabilitation in prison.