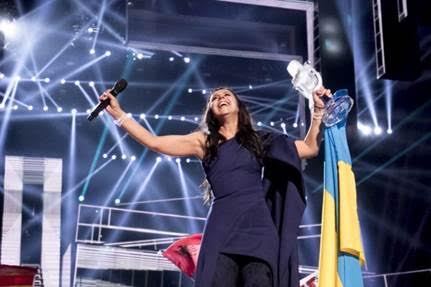 JAMALA wins the 2016 Eurovision Song Contest (ESC) for Ukraine with her controversial song “1944”.

Because the rules of the ESC expressly forbid entries of a political nature, and “1944” is clearly a politically motivated attack on the Russian Federation.

Because the song takes for its subject-matter the forcible deportation of the Crimean Tartars by the Soviet Dictator, Joseph Stalin, in – you guessed it – 1944.

What’s wrong with that?

Well, it’s less than three years since the Russian Federation annexed the Crimean Peninsula in response to the fascist takeover of the Ukrainian Government in February 2014. Since then civil war has raged in Eastern Ukraine, with the Ukrainian Government accusing the Russians of providing direct military assistance to its breakaway provinces. Relations between the two countries are at an all-time low. So, possibly not the best time for a song about Soviet Russia’s actions in the Crimea.

Why did they let it through, then?

Good question! The Russians are saying it’s because the European Union is determined to cast the Russian Federation and its President, Vladimir Putin, as Europe’s most dangerous enemies. They point to the fact that not only did the organisers of the ESC bend the rules to ensure that “1944” became a contender, but that the official jury also deliberately ignored the popular vote, which put the Russian entry at No. 1, so that they could install Ukraine as the winner.

But, it’s just a glorified talent quest – does any of this really matter?

Yes, it does. Just as the sudden appearance of anti-German newspaper articles and popular novels in the early years of the 20th Century helped to prepare the British people for war with Germany in 1914; seemingly unimportant gestures – like voting Ukraine the winner of the ESC with an anti-Russian song – may indicate that the European Union is preparing its members for war with the Russian Federation in the not too distant future.

Yes, but you still can’t get around the fact that what the Soviet Government did to the Crimean Tartars was very wrong.

That’s true. But it’s also true that, following Hitler’s invasion of the Soviet Union in June 1941, nearly 10,000 Tartar men joined the Tartar Legion and fought alongside the Waffen SS right up until the Red Army retook the Crimea in 1944. These SS military formations and their auxiliaries were responsible for some of the worst atrocities of World War II. Why didn’t Jamala sing a song about the victims of the Nazis and their Crimean allies? I would also like to know why the historically sensitive ESC Jury showed so little interest in who the Ukrainians were fighting for in the year 1944. (Here’s a hint – it wasn’t for the Allies!) Why is the deportation of the Crimean Tartars deemed worthy of a song, but the fate of the Ukrainian Jews at the hands of their Ukrainian Nationalist neighbours regarded as something best left in the past?

Not so much the Eurovision Song Contest, as the European Song Conquest!