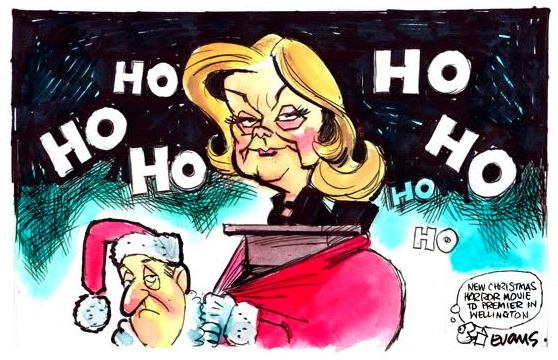 I’m happy-as-larry to have Judith Collins back as a Minister in this scandal-prone government.

I don’t know what possessed our esteemed Dear Leader to re-appoint her. One of them obviously has something on the other. But truth tell – I don’t much care.

She is the gift that keeps giving and I’m waiting how long before the next pratfall, scandal, mis-use of ministerial power, and links to right-wing loony bloggers, hits our headlines. The woman just can’t help herself. Her bloated attitude of entitlement/power over-rides any modicum of common sense she might possess.

I’m betting the entire Press Gallery will be keeping a close eye on her.  As will be every opposition politician, political scientist, blogger, pundit, etc.

Scrutiny of her activities will be unlike anything ever experienced by past or contemporary members of parliament. Media will be falling over themselves to be the first ‘break’ news of her next cluster-f**k.

Worse still, Collins’ next stuff-up will damage not just her career, as well as undermine Key’s perceived reputation for sound decision-making (for reinstating her) – but also the National Party’s future ability to govern, with “the Crusher” as a potential Leader-in-waiting. New Zealanders are not ready for a third-rate, self-absorbed “Kiwi Donald Trump” – one prone to “errors of judgement” on a seemingly regular basis.

NZ Herald: Judith Collins’ return to Cabinet: John Key had no choice but to reinstate ‘the Crusher’

Letter to the Editor: Judith Collins

Judith Collins – Hypocrite of the Week

Judith Collins – the Gift that keeps Giving to the Opposition?

The Daily Blog: “Judith Collins Is An Unaccountable Monster. It Believes It Is Outside The Law”: On Collins, the SuperCity, Democratic Solution-Making & Accountability

The Standard: Hey Tracy Watkins – Judith Collins was not “cleared” of dirty politics