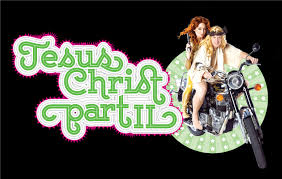 The Basement Theatre Christmas show is back and this year it answers a question we didn’t know we wanted the answer to- what if God decided it was time for the apocalypse but due to a bureaucratic requirement, had to send a representative thus bringing about Jesus Christ II?

The answer is presented to us by a core cast of four and a revolving cast of celebrity Jesus Christ IIs who have no idea what’s going on. On the night I went Madeline Sami was Jesus (yes, of course Jesus can be a woman) and she was brilliant. The core cast is Gareth Williams, Hayley Sproull, Julian Wilson and Victoria Abbott all of whom are equally excellent.

Oliver Driver, who directed last year’s JC Superstar is back at the helm. This time though, along with the rock musical numbers, there is a lot more piss-taking and improvisation. Which is exactly what that show needed in my opinion. The show was full of laugh out loud moments and even a spot of audience interaction.

There are moments of lag (which you’d expect when 1/5 of the cast members don’t know what they’re doing) but because of that, the 2 ½ hour show could probably have had 30 minutes trimmed off. That said, I thoroughly enjoyed myself the whole way through.

Definitely recommended for a bit of (not too serious or traditional) Christmas fun.