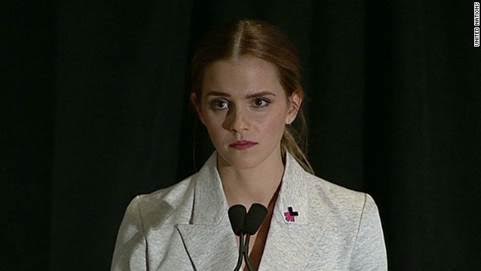 “I AM INVITING YOU to step forward, to be seen to speak up, to be the ‘he’ for ‘she’. And to ask yourself if not me, who? If not now, when?” That was the challenge thrown down to men and boys around the world by the British actor, Emma Watson, at the launch of the HeForShe movement in New York City last year. The brainchild of UN Women, the UN organisation dedicated to gender equality and the empowerment of women, HeForShe openly solicits the support of men in the struggle for gender equality – tacitly acknowledging the success of patriarchal resistance to the further extension of women’s rights internationally.

Watson spoke movingly  of her own conversion to feminism and of the many “inadvertent feminists” who had made it seem natural for her to be treated as an equal. But she also made reference to the declining influence of feminism as a mobilising ideology .

“I was appointed six months ago and the more I have spoken about feminism the more I have realized that fighting for women’s rights has too often become synonymous with man-hating. If there is one thing I know for certain, it is that this has to stop.”

Watson’s speech thus resurrected the line of argument which some of the early advocates of what came to be known as “Second Wave Feminism” deployed in their quest for male allies.

Subsuming the struggle for women’s rights in a grander battle for the freedom of both sexes did not, however, strike many 1970s feminists as a particularly effective strategy for securing their own liberation. Their personal experiences as political activists told them that any movement for gender equality in which men participated as full and equal partners would inevitably end up being dominated by men, and reflect a masculine view of the world. Women found their own voices much more readily in groups with a “Women Only” membership rule.

This herstory is well known to the New Zealand spokeswoman for HeForShe, Sue Kedgely. As one of the Founding Mothers of Second Wave Feminism in New Zealand, she is well aware of the movement’s organisational evolution. All the more surprising, then, that she should be the one inviting all good Kiwi blokes to don their shining armour and ride to the rescue of the world’s damsels.

Never backward in coming forward, Kedgely kicked off the New Zealand HeForShe effort, launched in Wellington on Friday (27/11/15) afternoon, by signing up the realm’s leading knight – and Governor-General – Sir Jerry Mateparae. Other high-profile fellas signing on to this noble, global quest to secure gender equality by 2030 include broadcasters Wallace Chapman and Jack Tane; economist and philanthropist, Gareth Morgan; and comedians Te Radar and Jeremy Ellwood.

If you’re a bloke and also feel moved to support this new cause of “Popular Feminism”, then simply pay a visit to the website www.HeForShe.org and sign on.

Just be aware, though, that not every feminist shares Emma Watson’s views. Responding to her New York speech, feminist columnist, Clementine Ford, wrote in the Sydney Morning Herald of 27 September 2014:

“It’s true that a person like Watson is very well placed to inspire people who may still be labouring under the weight of stereotypes regarding feminism, and that is undoubtedly cause for celebration. I applaud her for being brave enough to speak out when so many others haven’t. But feminists have been battling these stereotypes for decades and we will almost certainly be battling them for years to come because the unfortunate truth is that gender inequality is about power – who has it, and who wants to retain it. No amount of window dressing (for that is surely what the HeForShe campaign amounts to, given its entire breadth seems to be asking men to click a button and download a twibbon) is going to change the systemic global oppression that results in women’s degradation, subjugation and death in persistently high numbers. And it isn’t, as some have suggested, ‘tearing another woman down’ to want to discuss that reality.”

To which, as a “He”, I am happy to stand and say to that particular “She”: