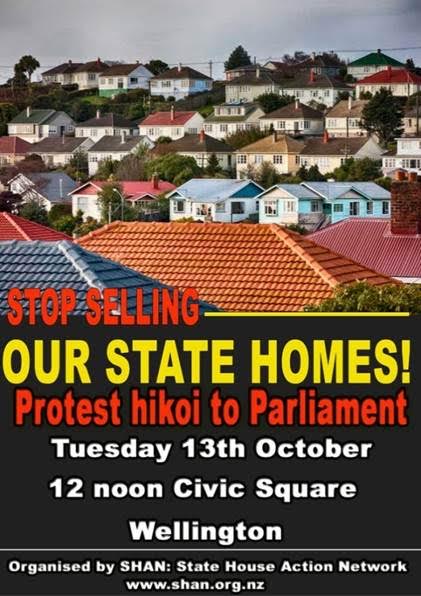 Tuesday’s reopening of parliament will be the focus for delegations of state house tenants from around New Zealand protesting government proposals to sell state houses.

The protest (see poster) will be led by groups from Tauranga and Invercargill which are the first two centres where the wholesale privatisation of state house assets is planned.

A rally will be held on parliament’s steps (approx. 1.30pm) following the march where speakers from around New Zealand will condemn government housing plans. MPs from Labour (Phil Twyford), the Greens (Jan Logie) and New Zealand First (Ria Bond) have also accepted invitations to speak.

“We are appalled that in the middle of a housing crisis for low-income tenants and families the government is trying to sell state houses to social housing providers – something which will make the situation much worse.”

“Many social housing groups do a good job but they will never have the capacity or resources to provide quality, affordable homes for everyone who needs them. Only the state is able to do this.”

“New Zealand has faced housing crises in the past where the government has stepped in to build large numbers of state rental houses. It must do so again.”

“Instead the National government wants to return low-income families to Victorian times when the only housing options were charities and churches.”

Tuesday’s protest delegations will let the government know this is unacceptable.