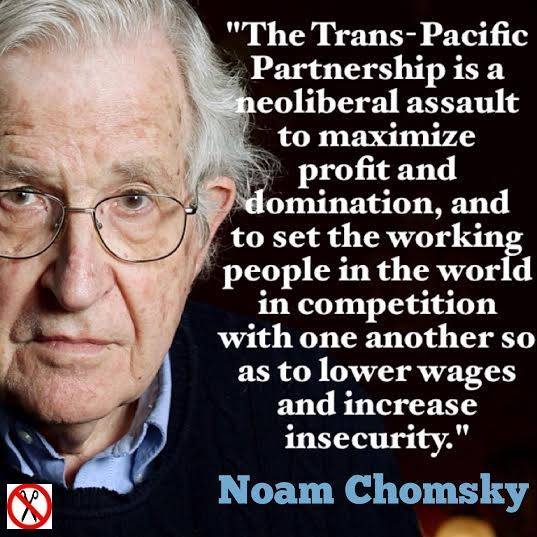 On 4 October,  our esteemed Dear Leader assured New Zealanders that, under the various free trade agreements we are party to, “there has never been a case taken against New Zealand…” and “we’ve never, ever been sued…”. 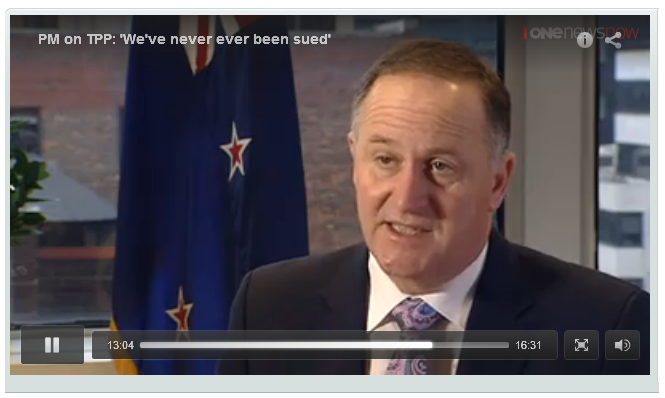 “There has never been a case taken against New Zealand…”

“We’ve never, ever been sued…”

Key’s “assurances”   were made four days prior to MFAT (Ministry of Foreign Affairs and Trade) releasing “Fact Sheets” outlining New Zealand’s exposure to lawsuits from corporations. Two MFAT documents – Investment and ISDS and  Market Access for Services and Investment are dated by a Scoop Media press-release  which places their release at 8 October.

Key’s insistence that  New Zealand is safe from lawsuits from foreign corporations indicates  he was privy to the text of the finalised Trans Pacific Partnership Agreement (which is still a closely guarded secret by Trade Minister Groser) and that  we, as a nation, are now fully exposed to litigation from Investor-State Dispute Settlement (ISDS) processes.

Despite Key’s insistance that “there has never been a case taken against New Zealand…” and “we’ve never, ever been sued…”, one only has to look across the Tasman to understand the full ramifications of ISDS provisions in trade agreements.

As Corin Dann reminded Key during the 4 October Q+A interview;

“…If we look at the plain packaging [proposed legislation for tobacco] in Australia, you’ve always said, ‘Australia’s being sued over that issue of plain packaging … in that that Investor-State Forum’; you’ve always said ‘we’ll wait for Australia to see how they go, ‘cos they’re going cop a massive legal bill’, so that’s stopped that [proposed legislation for tobacco] happening in New Zealand.”

Indeed, Dann was spot on.

A little under two years ago we  had our own Smoke-free Environments (Tobacco Plain Packaging) Amendment Bill, introduced by then co-leader of the Maori Party, Tariana Turia, on 17 December 2013.

With  15,682 submissions received  from interested groups and individuals, on 5 August 2014 the Health Committee recommended;

The Health Committee has examined the Smoke-free Environments (TobaccoPlainPackaging) Amendment Bill and recommends that it be passed with the amendments shown.

Despite cross-party support (with the curious exception of NZ First, for reasons that defy understanding), the Bill was put on “hold” by National.

This is what Key had to say about why  the Bill was put  “on hold”, until a court case between the Australian government and tobacco giant,  Philip Morris, is settled in an Australian court. He said,

“I don’t really see the point in us finally passing the legislation until we see exactly what happens in the Australian court case. We have a slightly different system, but there might just be some learnings and if there are learnings out of that, it would be sensible to potentially incorporate those in either our legislation or avoid some significant costs.”

John Key insists that New Zealand has never been sued under any free trade agreement.

Strictly speaking, that is correct.

However, we have already seen how even the possible hint of a lawsuit is sufficient to stay his hand and prevent the passing of a law that could potentially have  saved  up to 5,000 lives a year and saved the health system up to $1.6 billion per annum (est.).

In which case, the ISDS clause of the TPPA may never be tested under a National government – they would simply shy away from any legislation or other governmental policy provoking the merest suggestion of legal action. No matter how beneficial  a policy might be.

In an interview on ‘The Nation’, on 10 October, Trade Minister Tim Groser already seemed resigned to the fact that New Zealand could be sued if a government went ahead to introduce plain packaging for sugar-laden ‘fizzy’ drinks;

Tim Groser: I believe you probably could as long as you had a good health-based case and you’re ready to defend it.

Key’s timidity has already been shown with crystal clarity; we’ve never been sued before simply because National hasn’t the guts to be challenged.

Get some guts, Dear Leader!

During the 4 October Q+A interview, Key insisted that Phillips Morris initiated the lawsuit  under Australia’s Bilateral Investment Treaty with Hong Kong instead of the Australia-US FTA because the threshold for proving a case under the US trade agreement was “too high”. Key said,

“Well interesting enough, Australia has a free trade agreement with, ah, the United States. And in fact, um, they looked, I think, Phillip Morris, or whoever’s taking the case, at taking it under Investor State [Disputes Settlement] and they recognised, that Investor State, the threshold was so high, they’re actually not taking it under the US-Australia FTA. It defeats the very case that Jane Kelsey’s been making. They’re taking it out of a very strange agreement they’ve got with Hong Kong, which is why actually they went and registered themselves with Hong Kong to take the action against Australia.”

So Key is suggesting that Philip Morris chose to use an Australia-Hong Kong FTA rather than an Australia-US FTA because “the threshold was so high”?!

He is either woefully ignorant, or willfully disingenuous, of the fact that the United States has been the main instigator of Investor State Disputes claims, as UN stats show; 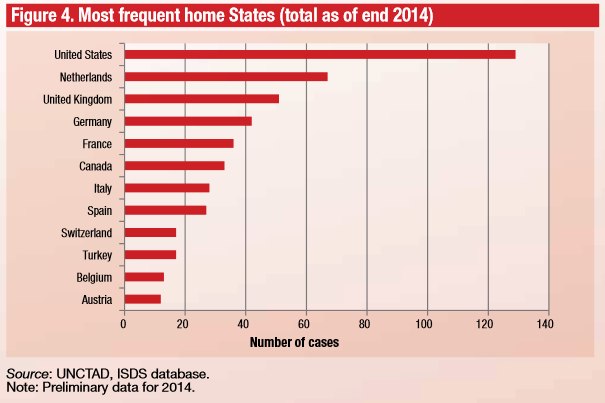 Even if tobacco company Philip Morris chose to employ a Hong Kong-Australia FTA to sue the Australian government, the fact seems immaterial at best.

As UN data shows, US-based investors are not at all reticent in using ISDS provisions to launch lawsuits against sovereign governments.

We have just entered into a trade agreement with the most litigious nation on Earth.

According to UNCTAD report Recent Trends in IIAs and ISDS;

The same UNCTAD report reveals who is being sued by corporations;

Multinationals have exploited woolly definitions of expropriation to claim compensation for changes in government policy that happen to have harmed their business. Following the Fukushima disaster in Japan in 2011, for instance, the German government decided to shut down its nuclear power industry. Soon after, Vattenfall, a Swedish utility that operates two nuclear plants in Germany, demanded compensation of €3.7 billion ($4.7 billion), under the ISDS clause of a treaty on energy investments.

This claim is still in arbitration. And it is just one of a growing number of such cases. In 2012 a record 59 were started; last year 56 were. The highest award so far is some $2.3 billion to Occidental, an oil company, against the government of Ecuador, over its (apparently lawful) termination of an oil-concession contract.

Canada is the most-sued country under the North American Free Trade Agreement and a majority of the disputes involve investors challenging the country’s environmental laws, according to a new study.

About 63 per cent of the claims against Canada involved challenges to environmental protection or resource management programs that allegedly interfere with the profits of foreign investors.

The government has lost some of these environmental challenges and has been forced to overturn legislation protecting the environment.

In 1997, the Ethyl Corporation, a U.S. chemical company, used chapter 11 to challenge a Canadian ban on the import of MMT, a gasoline additive that is a suspected neurotoxin and which automakers have said interferes with cars’ diagnostic systems. The company won damages of $15 million and the government was forced to remove the policy.

A year later, U.S.-based S.D. Myers challenged Canada’s temporary ban on the export of toxic PCP waste, which was applied equally to all companies. Canada argued it was obliged to dispose of the waste within its own borders under another international treaty. However, the tribunal ruled the ban was discriminatory and violated NAFTA’s standards for fair treatment.

A French multinational with operations in Egypt, however, did not like this minimum-wage effrontery. A couple of months later, Veolia, the global services juggernaut, bobbed along and sued Egypt for the grievous disadvantage it had suffered thanks to the industrial relations changes.

Veolia’s claim relies on ISDS provisions in a trade treaty between Egypt and France.

The Philip Morris lawsuit is expected to cost Australian taxpayers $50 million to defend, and proceedings will be held in Singapore, before a secret tribunal.

Two MFAT “fact sheets” – Investment and ISDS and  Market Access for Services and Investment – offer a government view of the TPP Agreement. The actual text of the TPPA will not be released for several weeks, giving National Ministers a monopolistic opportunity to push the government position, unchallenged.

The Age: Trade deals acronym really translates to ‘we lose’

Radio NZ – Focus on Politics: A closer look at the TPP

NZ Herald:  Most MPs set to back plain-package smokes

The Economist: The arbitration game

The Mendacities of Mr Key # 13: Kiwisaver – another broken promise