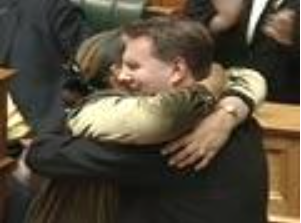 I have fond memories of sitting around comparing breasts. It was a slow day. One of the women had just returned with her brand new Bangkok boobies. She was whakawahine and a private worker. We were comparing her breasts with some local implants a parlour girl had purchased at a far greater cost. Then one of the volunteers had to get out her small soft, hormone induced tiny titties.  It was a hysterically funny conversation. It is only now in hindsight I realised how privileged and truly lucky I was to be included in those conversations. Not everyone has this kind of luck.

When I started work at the New Zealand Prostitutes Collective I didn’t know what to call anyone. The closest I had come to someone transgendered was watching the artists at Alfie’s Night Club and watching the Crying Game. I saw Georgina Beyer preform. She was so stunning. I was transfixed. Not only did I not know my trans apart, I also didn’t know  whakawahine from takātapui, from a fa’afafini, my FTM’s or my MTF’s and I was always missing a letter with my LBGTQI.  But then I asked. No one gave me shit for being ill-informed . They answered my questions. Early on in the piece, sensing my awkwardness, one of the women gave the ‘if it walks like a duck, talks like a duck, then call it a duck’ speech.

Not many people get to sit around day after day, in a job where you are being paid to talk about sex with sex workers, and ask those questions. I mean all those questions from the purely banal and salacious ; do you still have a penis, does it get hard, where do you keep it, where is it right now, what do you wear when you go home, is your boyfriend gay etc? The work related questions; who are your clients (omg I know him), what services do you provide, and do they know? Then later, the longer, more meaningful conversations around transitioning, how it feels to be in the wrong body and the importance of living life as who you really are.

But if you don’t work at sex workers drop in centre, if you aren’t someone who is at ease taking about sex, sexuality and gender, and if you never meet any transgender people, how are you supposed to learn stuff. Let’s be honest I know transgender people now in my community and like most people they would be shocked and appalled if you asked them any of these questions. And rightly so! This is deeply personal and private stuff!

Which is where things get tricky. Because if you can’t ask questions and if you can’t get information how do you break down the ignorance, stigma and discrimination? Recently I have realised how dangerous it is, especially on social media, to ask questions. Almost any question regarding any issue relating to gender gets called out and labelled trans-phobia, or if you are feminist the risk of also being labelled a TERF (Trans Exclusionary Radical Feminist).

Let me be clear. Hate speech and abuse is never acceptable. There is a difference between ignorance and being ignorant. Sometimes it is a fine line.

But, if you don’t know any people that are transgender, if you aren’t familiar with the terminology let alone ever needed to use the correct personal pro-nouns but you do have a history that includes sexual abuse and violence at the hands of men, issues like transferring transgender women to a women’s prison is going to raise questions.

By the same token if you are a feminist, who has read both Germaine Greer and Judith Butler you will have some questions. Questions aren’t bad. If they are asked genuinely, without the intent to cause harm, why should they not be raised? How does creating an environment of fear and intimidation help educate and challenge the binary, and change the narrative? If you want to alter the discourse, don’t you have to welcome the discursive?

Last week I read an article about exclusionary activism. I enjoyed it a great deal. In many ways it is the more sophisticated version of this blog. In it the author talks about the need to ‘call people in’ not just ‘call people out’. This practice of online shaming, twitter pile ons and bullying has become a practice I’m starting to see as not only reprehensible but also destructive to many causes. When a group starts shouting down any and all opposition and disengaging in dialogue then what separates them from the moralising ranting of the right wing conservatives who wish to ban books?

I am not transgender. I am a cis-gender women, who can never understand that journey.  I can only empathise wholeheartedly on how important it is to live your life as the person you are and not as someone else’s ideal.  Many times at different points in my life I have had to hide aspects of my life. Even recently, on completion of my degree while about to go job hunting people suggested I leave things off my CV. Once you have made the choice to live as honestly and as authentically (for want of a better word) as you can, there is no putting that cat back in the box. Nor would I ever encourage anyone to.

I know some voices are louder. They get more air time and they are taken more seriously. The voices of the minority, the oppressed and the marginalised still get shouted down. Yet when we are persistent, it is possible in New Zealand to be heard. We have that freedom and when we choose to engage, we have the ability to affect change. If your voice is not loud and is not heard sometimes I think the most important thing is working out how to use that voice effectively. To be an effective activist is one of the skills they never teach you at Uni. On Campaign Bootcamps one of those skills is that you need a thick skin. It also helps if you have a great support network.

Some of the most well intentioned people have asked me the most truly hurtful and insensitive questions.

Meanwhile, back on Twitter, the TERF wars have reignited. This debate is not new. It has been discussed and debated for over forty years. I do not share the views of those feminists nor do I consider myself transphobic but I am familiar with the arguments and I am familiar with some of the feminists that are most vocal. Perhaps not surprisingly they were vocal, and are still vocal on the rights of sex workers. They aren’t just TERFS but also SERF’s, Sex Worker Exclusionary Radical Feminists, (I just made that up). Here in Aotearoa many managed to move their position just enough to support decimalisation but some of the questions they asked during the process remain with me. They were good questions. I have not resolved all of them. They were the women who challenged me on the question of what it means to have choice.

Trans women should not be incarcerated in men prisons. That is simple. However I support other women to be free to discuss how they would react to having a transgender women enter a women’s facility will impact on that environment. As I said before, for women who have not encountered transgender women, or for women who for whatever their reasons, do not perceive transgender women to be women, are entitled to discuss the issues as they perceive them. What to us may be perception, is their reality. A women’s prison is a finely balanced hierarchal culture. I know this. It doesn’t take much to unsettle the culture. There are some incredibly vulnerable women incarcerated. There are many women in society in general that are scared, and for good reason, of men.  Talking about this is not transphobic. I would argue that closing the conversation down is. Sharing the experience that many trans women have had at the hands of men may only go some of the way to alleviating that fear. For many it will take more.

In regard to the feminist debates, I confess to be fascinated by the discussion. My current position is that I believe Beauvoir, “that one is not born a woman.” I also buy into Butler,  that all gender is performativity. I love Wittig, and the idea that woman is a class of domestic worker. All of this theory leads to a place where all gender is construct. Yet if all is construct, then what is it that defines us as women? Is it is as simple as identity, are we sure there is nothing more? What is it that drives the need of transgender or cis women to insist they are women? Isn’t this the question that drives that TERF wars? Does asking that make me a TERF?

The first short story I wrote that got published is about a friend from K’rd. It is based on a real friendship with a woman called Georgie. I remember one day saying to her that I had a really sore stomach, bad cramps, “You know. That time of the month.” She laughed and replied “No. I don’t get periods you idiot.” We laughed. After all my awkwardness and all my questions here I was only six months later and I had forgotten.

Debate is healthy. Public discussion and the ability to engage and challenge people’s bias and bigotry is a crucial part of eliminating ignorance. People should be encouraged to ask questions. If you subscribe to the view that there are no stupid questions, every question becomes a chance to engage. If you know the answers you won’t be scared of the debate, you will welcome it and embrace it.

The debate around decriminalising sex work culminated in one moment for me and a picture that made the front page of the Herald. I was in the public gallery when the result of the vote was announced. While we hugged and cheered above, below, Georgina Beyer hugged Tim Barnett below. When Georgina was dancing and I was still working nights. I doubt either of us could have imagined this.  We live in a small country where the most unlikely people can achieve the most unlikely things. Let us celebrate that by being a place where discussion is welcome.