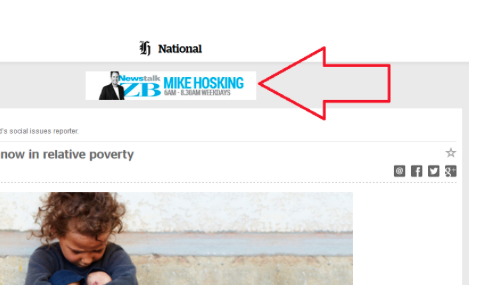 I was reading Simon Collins’ piece on child poverty in the Herald, and a small advert caught my eye… (See image above)

I’m not sure if Mike Hosking wants to be associated with our mounting child poverty crisis. It’s simply not his style. More accurately, it makes people like him feel queasy and uncomfortable. Rich people don’t like feeling uncomfortable – that is what wealth is supposed to eliminate. It reminds Hosking, and others like him, that whilst he is enjoying their wealth, others are surviving their poverty.

That sticks in his mind, deep down, somewhere, in the places where his parents tried to instill values of fairness in him when he was a child. That makes him resentful.

That is why the affluent; the rich; the powerful; the Comfortable Classes,  hate the poor so much. Otherwise, why do they invest so much time writing so defensively and caustically, when a blogger like Chloe King airs her views, in defence of the poor and the powerless? What is Chloe King to them?

Because they feel guilty.

Especially when she reminds them why they should be feeling guilty.

When  Mike Hosking made his views on child poverty perfectly clear on 9 April;

“Children cost money. If you can’t afford it, don’t have them. It’s not hard.”

– he was in full vengeful retaliation mode.

This was Mike Hosking – mouthpiece for the Comfortable Class – sheeting blame for poverty to the victims who have to endure it.

It would be like the victims of the Great Depression being blamed for being out of work; no money; and relying on soup kitchens to survive each day.

Now, when I was young, growing up, we lived off my dad’s sole income; mum stayed home and herded us kids. Dad’s income paid for the mortgage, food, power (a bill once every two months!), fuel for the car (an American  gas-guzzling, noisy, metal beast that I swear was a reincarnated T29 Soviet tank  in a former life), insurance, doctor’s visits (medicine was free – remember that?), and even a camping holiday to Taupo or somesuch place. We weren’t rich by any means. But dad’s income was sufficient for the things that average Kiwi families enjoyed.

And funnily enough, we didn’t need mass consumerism or seven day shopping and other such nonsense to get by.

The point is this; not being able to “afford kids” is like telling someone they are not worthy to breathe the air or drink water.

When did an act of nature become dictated by the amount of money a person had? Especially in New Zealand – a country  once upon a time we thought to be egalitarian?!

If our fellow New Zealanders “can’t afford” to have children, I suggest it’s not the cost of having children that is the problem. It is the inadequart income being earned by New Zealanders that is the core problem (I refuse to call it an “issue”) here.

In his article, Simon Collins presented two charts showing the growth (or lack thereof) of incomes since 1982;

Notice how incomes for the lowest paid have stayed low – even after Working for Familes was introduced in 2004? The lowest ten percent have moved from $15,400 to $17,700. Last year, they failed to be counted as Collins pointed out;

The report does not include figures for the poorest 10 per cent of households, who include most beneficiaries, because the names of benefits changed in 2013 and some beneficiaries appear to have reported only how much they received since the new benefit names were created, missing out their incomes for the first half of the 2013-14 year.

Very convenient for the government, no?

Let’s be clear here. When right-wing ‘pundits’ and cheerleaders for the rich deride the poor for having children, this is barely-coded moralism and victim-blaming.

It is attempting to paint the poor as suffering “deeply flawed character”, almost to a DNA-level.

In fact, many right-wingers openly refer to welfare recipients as “inter-generational”; the subtle nod to ‘bad DNA’ being made without recourse to the more clumsy eugenics policies of you-know-who.

By blaming the poor for the temerity to have children, the Right shift the blame and deflect attention from the real question; why are people so poor that they cannot afford to raise a family as we used to, before the advent of Rogernomics?

Is it because, since 1986, Baby Boomers have voted seven tax cuts for themselves?

Is it because, as taxes were cut, GST was introduced and increased, as was user-pays in areas such as education?

Is it because simple things like medicine has gone from being free – to five dollars for each item?

Is it because trade unions are no longer able to advocate for their members, and wages have not kept pace with productivity, as this chart from the New York Times showed for US workers (and most likely applies here as well)?

Yes. All of the above, and more.

The next time a right winger is ranting on about the “breeding poor”, remember that what they are really trying to say is;

… it’s their fault they are poor; they are unfit humans. Their bank accounts prove it.

… it’s not my fault I’m paying less tax than my counterparts did, thirty years ago. I just voted for it.

… only the Comfortable Class should breed. For we are superior because we have the moral fortitude (and good genes) to make money and keep it.

… don’t bother me about the poor. I’m trying to enjoy my Beluga caviar and Bollingers, thank you, without being reminded…

We will continue to remind you.

Don’t choke on your bolly.

“Create a society that values material things above all else. Strip it of industry. Raise taxes for the poor and reduce them for the rich and for corporations. Prop up failed financial institutions with public money. Ask for more tax, while vastly reducing public services. Put adverts everywhere, regardless of people’s ability to afford the things they advertise. Allow the cost of food and housing to eclipse people’s ability to pay for them. Light blue touch paper.” –  Andrew Maxwell, Irish comedian

The Daily Blog: Now we got bad blood – being poor in a rich world

Newstalk ZB: Mike’s Editorial – The cost of a child

When the teflon is stripped away