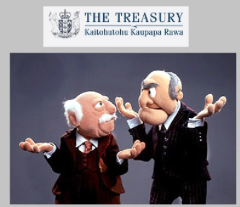 To sort out our intransigent economic problems, ordinary people need to understand how things actually work today and how things do not work. The peasants need to challenge the priests, as they did in Luther’s time when the sacred texts were translated into the vernacular, allowing the obfuscation of the priests to be exposed. The Peasants Revolt of 1525 was a direct result, first of Gutenberg’s printing press, and then of Luther’s challenge to a then morally bankrupt Catholic Church.

Macroeconomics sounds big and complicated, and best left to the experts; but that’s not so. Of course there can be lots of complexity around the edges, but the central truths are very simple. Further, like most important ideas, they can be best appreciated through imagery that cuts through the jargon. I will paint, here, a simple picture with words.

So I invite you to consider a causeway that crosses a wide river estuary, above the tidal zone. The causeway itself represents the passage of time. The flow of the river represents ‘the (global) economy’ of goods and services. Pipes (eg concrete tubular sewer pipes) connect the upstream side of the causeway with the downstream side.

Messrs Market, who manage the core money supply, pay money to us when we sell our stuff to Mr Market. That money is paid with the full expectation that Mr Market will fully recoup that money on the other side of the tunnel, as we buy the stuff that we made.

This is the central idea of what economists call equilibrium. The goods and services flow through the tunnel, from producer to consumer. Money flows above the causeway in the same direction as the river, and flows through the pipe (from Mr Market to Mr Market) in the opposite direction to the water’s flow.

Microeconomics is about the mix of goods and services produced. The economy grows through a mixture of knowledge accumulation and people (including their governments) choosing to spend a significant portion of their money on investment goods. If Mr Market detects a high demand for goods such as machines and systems and structures, then price signals will be conveyed to producers who will produce more of these things. Thus next month’s upstream output will be bigger, and more water (goods and services) will flow through next month’s pipe.

The important point is that, in this equilibrium construct, all the money flows, just as blood flows. With investment the flow expands over time. The Markets manage this flow; they do not inhibit it.

The common misunderstanding about money is that it is wealth (a stock that, through work, we make), and therefore it should accumulate rather than flow. So the reality in most of human history since money was invented (the period 1950-75 might be historically exceptional, as Thomas Piketty suggested) is that not all the money flowed. Rather dollops of it accumulated, resin-like, on top of the causeway. The holders of this unspent money (spending abstainers) interpret these dollops as their wealth. Rather than flow across the causeway to Mr Market (on the downside of the pipe), they expect this money to flow along the causeway, into the future. Further, through a process akin to magic, they expect these dollops of unspent money to expand over time.

(While there is an individual rationale for ‘precautionary saving’ – otherwise known as private austerity – systemically this is destabilising or unbalancing behaviour. The Quakers of the industrial revolution were not austere hoarders of money – they invested their earnings through spending on plant and machinery.)

The good news is that we have banks, which can, with lesser or greater difficulty, offset the dampening effect of the money hoarders; and we have Luca Pacioli’s Venetian double-entry system of bookkeeping. While the commercial banks can usually create extra money to compensate for monetary sclerosis, in doing so they must create an equal measure of anti-money, which you and I generally call debt. The new money is spent (known as deficit spending), thus countering the depressive effect of the dollops of unspent money. On the causeway we are left with equal piles – one amber (say) and the other red (like the Spanish flag). Money and anti-money.

That’s it. Macroeconomics in a nutshell. Debt – anti-money – is a crucial part of the stabilisation process.

Rebalancing of an unbalanced system can take place either through negative interest rates (as noted), or through holders of hoarded money spending some of it (deficit finance on their part), enabling holders of anti‑money to run surpluses and reduce their debts.

The causeway and the river estuary represent the 2000s’ Eurozone economy to a tee. In that decade, the Euro Area was like a compact version of the global economy; like a ‘closed economy’ as economists say. The private sectors of the north accumulated money (imagine amber resin or plaque). The private sectors of Iberia, Ireland, Cyprus and Greece – and all the Eurozone governments – accumulated anti-money (imagine red resin). As the decade unfolded, both piles – amber and red – grew much bigger. Following austerity in the Euro Area, both piles have continued to grow, but the amber pile has grown faster. The Eurozone no longer acts as a closed economy. It (through its private sector) is now a net exporter of finance to the rest of the world (meaning its money exceeds its anti-money). Thus the rest of the world holds more red than amber. (By definition, for the world as a whole, amber and red – stocks of money and anti-money – add to zero.)

Where does New Zealand sit? Per person, New Zealand is one of the highest (probably the highest) holder of private-sector anti-money in the world. Red to the gunnels. But remember that red balances amber. We (like Greece) can only reduce our outstanding stocks of anti-money if the world reduces (by spending) its stocks of unspent money.

Jane Kelsey has written this year about the FIRE Economy (refer The FIRE Economy: New Zealand’s ReckoningScoop 17 July 2015), with particular reference to neoliberal New Zealand Finance, Insurance and Real Estate. The New Zealand economy, through its finance and real estate sectors, helps to stabilise the world economy by taking on some of the debt that is needed to compensate for the accumulating hoards of money elsewhere, especially in Europe. (Asia holds huge hoards, too, but is not expanding its hoards at anything like the rate that Europe is.)

The problem for trouble-shooters is that, for the immediate present the world economy is comparatively stable, and growing at historical rates (three to four percent a year) by virtue of the growth of anti-money. For the longer-term, however, the growing size of the (amber) monetary stockpile (with its compensating debt pile) is an assuredly destabilising factor. The problem is the ‘elephant in the room’ that remains invisible to the wilfully blind and to the colour blind. The elephant is amber, not red. Red is the consequence, not the cause.

The world economy will always have stockpiles of money and anti-money. For the sake of stability, the size of those stockpiles relative to world GDP should be falling not rising. Unfortunately, the privately-held stocks of unspent money are still rising rapidly. Increased private sector financial surpluses (evermore amber) is what is happening, and too many of us choose to interpret them as a ‘good thing’. We also see the high levels of offsetting government sector deficit (red) finance, but do not make the connection. We also sense the rising levels of offsetting private sector deficit finance in New Zealand and many other mainly non-European non-Asian countries. The dots remain unjoined.

The world economy is imperilled by its glut of unspent money, as it has never been since the late 1920s. There are solutions, including green low-growth solutions. But they are largely beyond the adjacent possible. We cannot properly investigate these solutions if we stubbornly refuse to understand the problem.