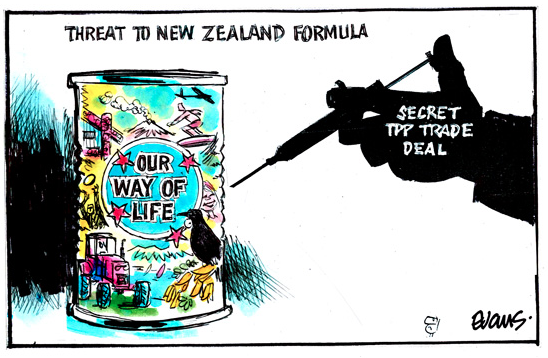 Labour’s attempt to spin this announcement to appear to take a principled position that meets its members’ concernsm is disingenuous at best. There is only one red line in this list. The rest you can drive a bus through.

That one red line reflects David Parker’s obsession with the right to regulate foreign investment in land – a crucially important right of governments, but it has already been given away in relation to China through the recent Korea FTA, because China is entitled to the same treatment as NZ gives Korea. True, not including it in the TPPA would mean the US and Japanese investors don’t get it, but investors can re-locate themselves easily enough to take advantage of the existing FTAs.

Is Labour not equally concerned about protecting the right to introduce a capital gains tax (a question not answered by officials in relation to the Korea FTA and not mentioned by Labour)? Or not pouring more of the health budget down the trough of Big Phrma or its local offshoot (not some vague promise that ‘Pharmac must be protected” – what does that mean????)? Or ensuring the SOE chapter will allow Labour to establish their state-owned KiwiAssure or rebuild a genuine public broadcaster?

Moreover, Labour seems to be sticking to the ‘we can’t reach a final decision until we see the fine print’ – by which time they know they can’t change anything.

What really matters to National is to legitimise the TPPA by claiming bi-partisan support. Labour’s leader Andrew LIttle needs to have the guts to say to Phil Goff, Mike Moore protogé Clayton Cosgrove, health minister Annette King (who has been super silent on the health impacts) and David Parker that this deal will place unacceptable handcuffs on future Labour governments and that Labour is going to oppose it – and he needs to do so before the TPPA ministers meet in Maui on Tuesday.