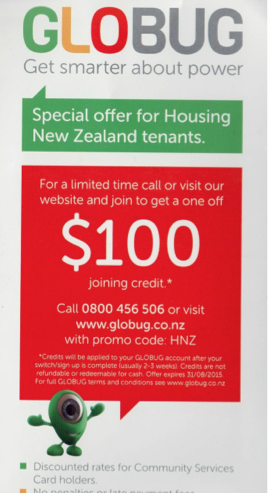 Well, I’m glad I opened this one.

The theme of this newsletter is about power, keeping our kids healthy and how to keep our houses warm.

But before I even got to that, a flyer fell out. From Globug. Announcing a special deal made between HNZ and Globug for HNZ tenants.

Yes, really. Once I recovered enough from my disgust, I opened the newsletter. It begins by an editorial by HNZ’s CEO, Glen Sowry. It’s all about blaming us tenants for not getting HNZ’s attention about the poor condition of our homes.

‘A lot has been said in the media lately about the condition of our homes. As your landlord, we are committed to providing you with a warm, dry home. In the vast majority of cases we achieve this, but with 67,000 homes to look after nationwide, we rely on YOU to inform us of issues as they arise’. (Emphasis mine.)

Once I’d recovered from this second wave of disgust, I turned the page. It only gets worse: 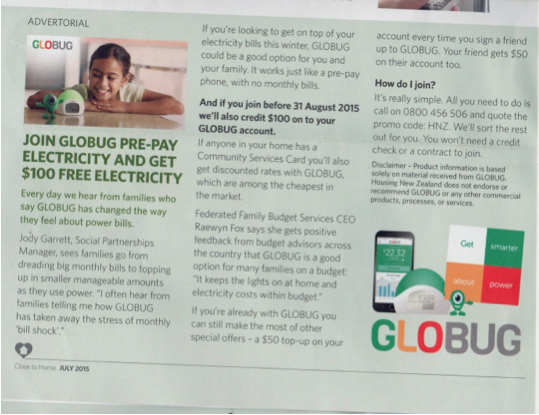 A half page advertorial from GloBug, extolling its benefits – even managing to find a budget advisor to bolster their claims, and reminding us of the awesome deal available for HNZ tenants with GloBug.

Hilariously, it ends with a ‘disclaimer’: Housing New Zealand does not endorse or recommend GloBug.” So what adverb exactly would you use to call this then?

But this is awesome, some of you cry. What is your problem? It’s a great deal! HNZ tenants should consider themselves lucky to get this amazing deal.

The problem is, it’s all lies.

Coverage of GloBug began in 2012 with this warning from Consumer NZ:

It was also concerned by planned increases in power prices. “All of this is about making life easier for the electricity companies to do what they already do very well, which is effectively plunder people’s bank accounts. We don’t think pre-pay is in the best interests of most of the people who are likely to end up on it,” he said…. pre-pay customers pay on average 10 per cent more for electricity than post-paid customers receiving a “prompt payment” discount.

Wilson said that was unfair. “If you are paying in advance, you are paying very promptly aren’t you? Plus, electricity companies have taken the money in advance, so there is a small opportunity cost of not having that money in a savings account generating some interest.”

Recent stories from June in the Herald from state housing tenants who switched to GloBug are highly alarming:

A South Dunedin family is warning low-income earners about their power struggle after switching to pre-paid electricity supplier Globug. Labourer Matthew Lane said he had paid a monthly Mercury Energy power bill for about seven years.

The cost for himself, partner Tamara Smith and their 7-month-old baby Jaxon in their St Kilda home was usually between $120 and $150 a month.

The one-income family switched power companies last month after being lured by a promise of cheaper pre-paid electricity from Globug. ”Paying the power bill wasn’t a problem. I joined Globug because it was a deal that sounded too good to be true.”

Globug and Mercury are both owned by Mighty River Power.

The family used power to run a small heatpump, a fridge/freezer, a washing machine and a television. To save power, the family showered every second day, did not use their bath and did not understand why the prepaid electricity was used so quickly. The family did not have $20 for the minimum top-up payment, the device glowed red and the power was disconnected.

”I’m putting a warning out there for low-income families. A lot of people can’t pull $20 out of their back pocket,” Mr Lane said.

Globug declined a request by the family to top up $10 for some heating.

The family asked to disconnect from Globug and be switched back to Mercury. However, after disconnecting, Mercury declined to reconnect the family, saying it did not meet its credit criteria. Mr Lane said he had a clean credit record but had a black mark with Mercury for disconnecting from Globug.

The family called Genesis Energy on June 2 asking to be connected and were told they passed the credit check but it would be June 10 before they could receive power, as the company had a stand-down period with Globug.

The family was left in limbo with a 7-month-old baby and a cold house, as heavy rain fell outside, the family still without power and the money to top up. The next day, the house was flooded. Friends housed the family until Genesis could connect the power and the stormwater drained away.

Following the publication of the story, several past and present Globug customers contacted NZME. News Service to tell their stories.

Christchurch mother-of-one Jessica Campbell, 26, said she had signed up for the Globug service in March on a promotion that gave new users a $50 credit. “Every single time I top up, if I top up $20 I get a day and half and then I’m out of power,” she said.

“We live in a brand new state house, the ones that they’ve just built. They’re insulated but they’re really, really cold.” One week she ran out of power four times. Ms Campbell said she had taken measures to conserve power.

Another Globug customer, Terri Hutchen, said she switched to Globug on May 25 and by June 16 had topped up $395. The 28-year-old lives in Tauranga with her 29-year-old husband and their two children, aged five and eight, in a new home that is fully insulated with doubled glazed windows.

Before switching from Mercury, her average month power bill was $300 max, she said. “I’m estimating that my average monthly bill with Globug is now going to be anywhere from $525 a month.” “We changed due to financial hardship and this is just unaffordable,” she said.

David Marrra of Christchurch Budget Services said he recommended Globug to his clients, but the service was not for everyone. “If people have a Community Services Card then the rates are comparable to or better than the best rates around,” he said. However, he said Globug wasn’t right for households metered for night rates on hot water, but low-end rental properties often were not.

Few of you will be surprised to know that most HNZ houses, and most low income housing are on night rate meters.

So, HNZ – was this really a good idea? Because I’m hearing stories left right and centre of people finding Globug hideously expensive, and getting off it and managing to get into another power company or plan afterwards almost impossible.

GloBug is a trap, perfectly created to take advantage of vulnerable, low income people. The company says so itself in the above articles.

By the way, go have a look at the T’s & C’s on the Globug website. That $100 credit is almost gone on fees before you even get connected. There are heaps of unmentioned fees – to top up, to check your balance – even the advertised child-mesmerising, almost electronic-babysitter device costs $70. And if you still have credit on your Globug when it’s gone red and you don’t top up? It’s gone.

This is gross irresponsibility from Housing New Zealand.