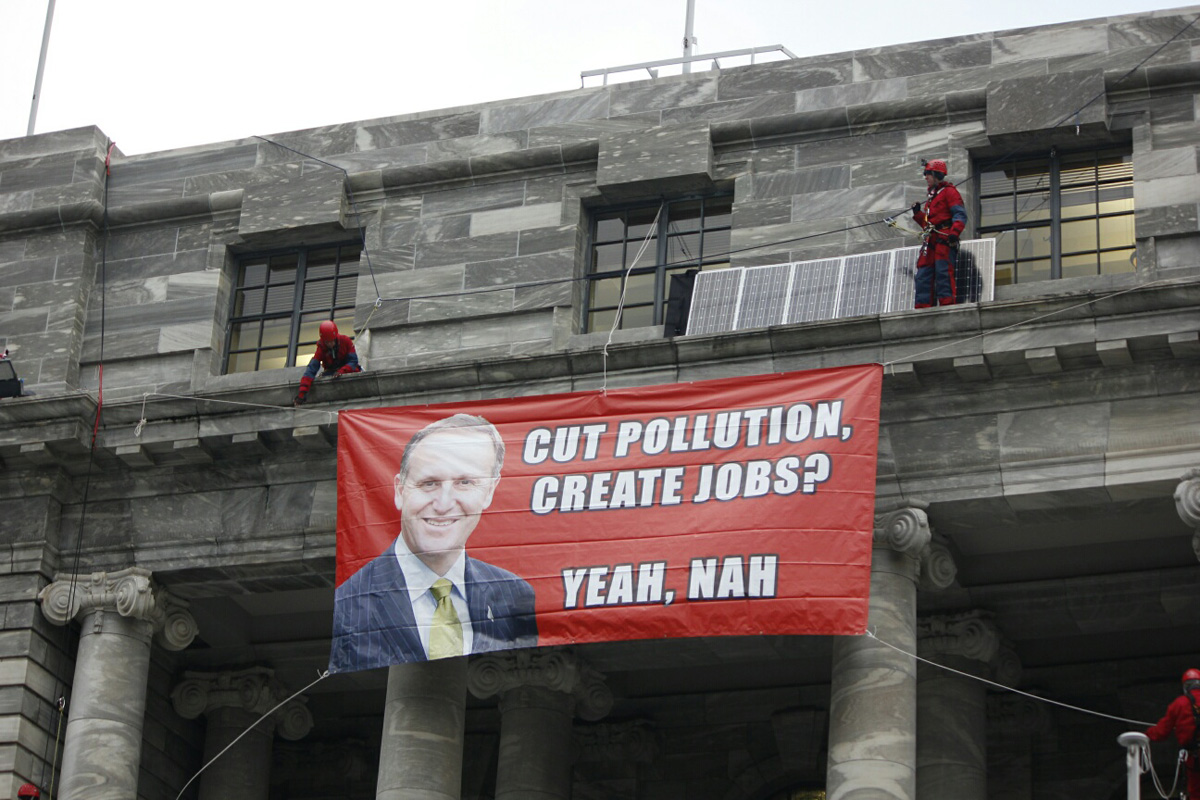 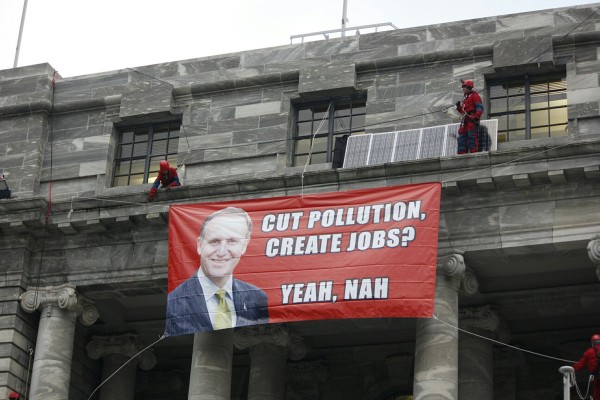 The government has just announced a new green house gas emissions reduction target that has been almost universally panned by opposition parties, social agencies and NGOs as pathetic.

But even if this target wasn’t pathetic, New Zealand has had emissions reduction targets before. And despite these past agreements, our Green House gas emissions have kept rising.

Leading up to the United Nation’s climate summit in Paris for later this year, every country has been asked to bring an emissions reduction target.

Which has what has led our government to announce their latest target.

But as John Key likes to say about such international agreements, they are just “aspirational”.

In 2010 speaking in parliament on the UN declaration on the Rights of Indigenous Peoples, to which his government had just signed up to, John Key said, it is “just aspirational” even claiming “it would have no effect what so ever.”

“I think it is important to understand that the Declaration on the Rights of Indigenous Peoples is just that—it is a declaration. It is not a treaty, it is not a covenant, and one does not actually sign up to it. It is an expression of aspiration; it will have no impact on New Zealand law and no impact on the constitutional framework. What is more, the advice we had from Crown Law was that whether or not New Zealand affirmed it, in areas where we do not have law or constitutional arrangements already, the declaration could be imported already, and that people have already tried to do so, so affirming it would have no effect whatsoever.” JOHN KEY
parliament April 20, 2010

John Key has said his government’s new target to cut green house gas emissions is ambitious, his critics say, it not even aspirational. But more than being weak, (and far less than what other similar countries have signed up to). Our new emission reduction target will not be kept. Because the government has no program to implement it, none at all. Instead, the government has a program to spend $billions on new motorways, which will grow more cars, the government has invested heavily in enticing oil companies here to drill in our deep waters at the very limits of technology, and the government is subsidising big emitters, Tiwai Aluminium $30million, and Solid Energy a quarter $billion. While refusing point blank to give even the slightest edge to renewables.

Even if the government’s target was only for a 1% cut in green house gas emissions they wouldn’t keep that either, because in practice, our political leaders are doing everything to increase emissions.

To justify this contradictory position the government apologists argue that by drilling and mining coal and oil they are not burning it, and that the demand is the problem.

But arguing with the government over their climate change policies and low figure for their target is pointless.

What We Need is Something Completely Different

There is another reason that argument over the government’s reduction target is pointless.

New Zealand’s total greenhouse gas emissions, (from all sources), are 0.2% of the world’s total. If New Zealand were to completely cut its greenhouse emissions, in isolation it would make hardly any objective measurable difference to the final terrible global outcome resulting from planetary widel climate change. But quantity is not everything. We could make a qualitative difference.

In the struggle against climate change, as in most human endeavours, leadership is that indefinable something that often makes the difference between success and failure.

New Zealand can, and has been, a world leader, not in the sense of being big, populous and rich enough to support a huge diplomatic, trading and military empire, able to project our political will over the horizon, like the big leading industrial, political and military powers of the world are wont to do.

Our leadership has been something different. Something qualitative.

New Zealand is a small country it is true, but what we do here has in the past had world shaking consequences. Where we have gone others have followed.

The first country in the world where women achieved the vote,

The country that more than any other outside of South Africa itself, spurred the world to tighten the international sport and trade embargo against the apartheid regime. (On the negative side of the ledger, the first country to embrace neo-liberalism, and cited by Margaret Thatcher as an example to follow.)

If we took qualitative leading action against climate change who could we first hope to influence with our examp[e?

Unlike New Zealand, Australia is a major quantitative emitter, it is also one of the countries most vulnerable to climate change, many Australians are worried and even frightened by the extreme climatic events that that have been impacting their country. If we, here in this country can achieve a qualitative breakthrough against fossil fuels, something that would be remarked across the world then the power of our positive example will put political pressure on Australia to follow our example. Collectively with Australia we can make a real global quantitative difference.

Writing about climate change on the official New Zealand Government website, the government chief science advisor to the goverment, Professor Gluckman, put it this way:

“New Zealand is a small emitter by world standards – only emitting some 0.2% of global green house gases. So anything we do as a nation will have little impact on the climate – our impact will be symbolic, moral, and political”

Globally coal is the number one cause of climate change.

Australia is the world’s biggest coal exporter and a major polluter.

Auckland Coal Action, and others have been leading a campaign to wind down the coal industry in this country.

The whole point of the campaign to rid New Zealand of coal, is to pressure our nearest geographical and cultural neighbor, Australia to do the same.

The message for our Australian cousins, witness to the increasingly horrifyingly cumulative effects of climate change, increased frequency of life threatening, flooding, hurricanes, and deadly heatwaves, is this:

If we here in New Zealand can completely rid ourselves of coal, so can you.

Already a start has been made.

“You will not get your coal mine”