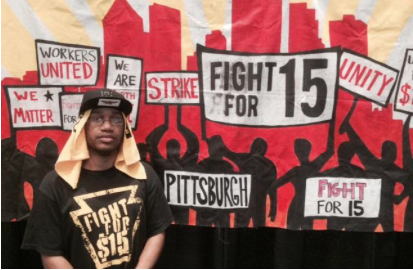 On June 6 a NZ McDonald’s union delegate and myself were able to speak to 1300 representatives of fighting fast food workers from across the US at a national conference in Detroit.

We were there at the invitation of US unions to explain how we had successfully taken on the fast food giants in New Zealand over zero hour contracts.

The 2.2 million strong Service Employees International Union (SEIU) has been the campaigns main backer and its president Mary Kay Henry reaffirmed that support at the convention in a strong speech that also criticised cop murders of young blacks and affirmed the rights the millions of so-called undocumented workers who have few legal rights. Media reports claim the SEIU has already invested up to $25 million into the campaign but in her speech Mary Kay Henry argued the future of the labour movement was at stake in this struggle and it needed to be carried through to victory. 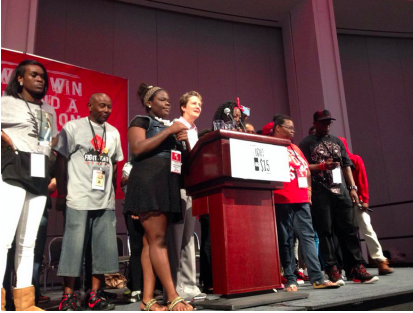 Mary Kay Henry, president of the Service Employees International Union, and members of the Fight for $15 national organizing committee

It was not always clear in discussions in the US whether a traditional union and a contract was the goal or something different. US law tend to have a all or nothing aspect to them so that unions usually try and win a ballot of staff to represent them and if they win they have the legal right to negotiate for all staff. This campaign has been different. Their slogan for “$15 and a union” is deliberately ambiguous on the form of the final outcome.

SEIU officials and union activists were interested to hear that we had been able to recruit 4000 fast food workers in NZ which is about 20% of the staff of the major companies and achieve collective agreements. But more importantly we have maintained that membership for a decade despite the industry having a 66% turnover of staff annually and some companies being deeply anti-union. Key to our success was having a right of access to speak to staff. It seemed to me that if cities and states could pass laws around the minimum wage maybe they could also pass laws allowing access.

The US minimum wage is a pathetic $7.20 an hour. The campaign for a $15 minimum wage has spread to other sectors of the workforce which have already have unions and progress has been made. Even more significantly cities and state governments have been legislating to increase the minimum wage significantly above the federal minimum and some like Los Angeles and Seattle to $15 over the next few years. New York state is expected to join them in the next few weeks.

Chris Ellis, a McDonald’s worker from Pittsburgh, is seen at a convention of low-wage workers at Cobo Center in Detroit, Mich, on June 7, 2015. After a recent 10-cent raise, he makes $7.70 an hour

Last year the campaign reached out across the globe and the first international protest day was held on May 15, 2014. This year Unite Union joined the second world wide day of protest on April 15. This year the protestsembraced other workers and issues of race and economic justice more broadly.

Following the US fast food workers meeting a two day conference of unions affiliated to the International Union of Foodworkers also meet to plan the next stages of the international campaign. Powerful reports documenting the abuses of workers rights and systematic tax avoidance by McDonald’s have also been produced. This August there are expected to be hearings in the Brazilian Federal Senate to investigate McDonald’s global behaviour chaired by Senator Paulo Paim. The focus of the hearing will be testimony from Brazilian and global McDonald’s workers and their union representatives. Unite hopes to be present at those hearings also.

Workers in the US have also identified insecure hours as a major problem. A landmark Retail Workers Bill of Rights was adopted in San Fransisco that is being copied around the country. Bills have been proposed in Indiana, Maryland, Massachusetts, Minnesota, Illinois, Connecticut, California, New York, Michigan and Oregon. Brice Colvert at ThinkProgress explains the pair of bills that focus on fair scheduling practices:

The new rules will require retail chains that have 11 or more locations across the country and employ 20 or more people in San Francisco to provide advance notice of schedules, improve the treatment of part-time employees, and give current workers the opportunity to take on more hours before hiring new people. Employers will have to give their workers at least two weeks’ advance notice of their schedules, and if they fail to do so they will have to give those workers additional “predictability pay.” Workers also get paid if they’re required to be on call but their shifts are cancelled. Employers will have to give part-time employees the same starting wage as those working full time in the same position and access to the same benefits.

These are exactly the issues identified by Unite Union during it campaign against zero hour contracts. While we made progress in winning guaranteed hours in the collective agreements we have with the fast food companies it appears the government got cold feet over its promise to introduce legislation outlawing what Workplace Relations Minister Michael Woodhouse called “the worst aspects” of zero hour contracts by the middle of this year. That has been postponed now to sometime next year. I am sure that he hoped that the heat would go out of the issue by then. But I am also sure that he discovered that these contracts were much more widespread than he initially thought. They seem to have become almost the norm in many industries – especially in retail and services. The heat will need to continued to be applied if we are to make substantial progress legally. It should remain a priority for the labour movement as a whole not just Unite and the others most closely associated with the issue to date.

In fact that is the reality of life for workers across the world. A recent report by the International Labour Organisation (ILO) found that only one in four workers has a stable job.

“Employment patterns have changed considerably over the past decade. Full-time, stable employment contracts represent less than one in four jobs and that statistic is not improving noticeably. […] Furthermore, the rise in informal employment, undeclared and temporary work arrangements, as well as involuntary part-time work, has contributed to the widening of income inequalities, which have been recorded in the majority of countries over the past two decades.”, Guy Ryder, ILO Director General