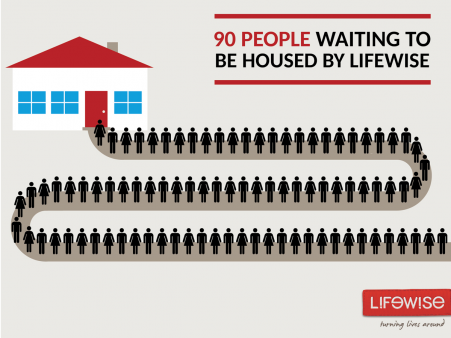 Another day, another news item about the housing crisis.  It can get tiring reading about it, day in and day out – but the it’s so much worse when you face the hard reality of it every single day.

Homelessness is growing in New Zealand – the 2006 Census counted more than 33,000 children, men, women and families living in unsafe or insecure housing. Street counts of people sleeping rough have risen sharply since then too, with more than 140 Aucklanders sleeping rough in Auckland’s CBD alone!

So what’s happening? Why are more and more people ending up on the streets?

The truth is that there simply are not enough houses for everyone in New Zealand. At Lifewise, we are incredibly proud of our Housing First approach to solving homelessness.Lifewise strives to get people off the streets and into permanent homes, not just temporary shelter. We then give people the support they need to work through issues like addiction and mental illness, and help them to rebuild their lives out in the community.

Housing First is the only method has been proven to truly end homelessness – cities like Arizona and Utah have completely eradicated street homelessness!

And it’s been proven to be much more cost effective to give someone a house than it is to keep them on the streets. The costs to the taxpayer of a Housing First approach are tiny compared to the huge costs of living rough – emergency room visits, hospital stays, and going through the justice system are a huge bill we all pay for homelessness in NZ.

The Housing First theory is fantastic, but reality is that there simply are not enough homes to put people in. Lifewise has more than 90 people ready and waiting to be housed – but we simply can’t find anywhere for them.

Every week, our desperate clients call the Ministry of Social Development, hoping that they will have won the housing lottery. And all too often, they get told that they haven’t. Over, and over, and over again

The people most affected by Auckland’s housing crisis are our most vulnerable. They are the ones who end up sleeping in over-crowded garages, on people’s couches and under bridges when they can’t afford a rental.

We need to face the facts – New Zealand desperately needs to wake up and address the cold hard facts. Access to safe and secure housing is not a luxury – it is a human right. If we don’t act now, more and more people will be pushed to the margins. And at the end of the day, that’s a cost we will all have to bear.

We want to hear your ideas for ending homelessness in New Zealand. Join the conversation on our Lifewise Big Sleepout Facebook page.