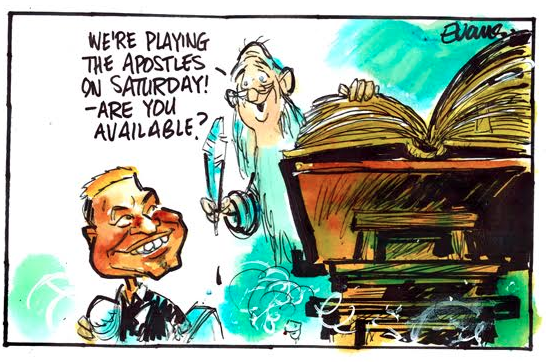 IT LOOKED SPONTANEOUS, but it wasn’t. Crowds numbering in the thousands very seldom appear without a lot of behind the scenes preparation. And when Jerry Collin’s body returned to Porirua last Sunday, it seemed as if half the city had turned out to welcome their fallen rugby hero home.

It was the same today. Te Rauparaha Arena was filled to its 4,000-seat capacity for Collins’s funeral service. Rugby greats of both the past and the present; including Jonah Lomu and All Black Captain, Ritchie McCaw; were there to pay their respects. Porirua’s ambitious young Mayor, Nick Leggett, spoke too, but briefly. More than happy to let the huge crowd speak for itself, Leggett simply noted that Collins was “a home-town boy at heart”.

The rugby field was always the place where Collins spoke the loudest, but, in the extraordinary outpouring of love, grief and pride at his tragic death, he has bequeathed to those with sufficient wit to interpret it, an important message about what moves and inspires Pasifika people in New Zealand.

Because these thousands of Pasifika men and women, boys and girls, who have, in recent days, filled their city’s streets and stadia, are exactly the same people that European political scientists and commentators have in mind when they talk, glibly, about the “Missing Million” voters.

It’s not a kindly designation. Those who, though eligible to vote, decline to do so are, more often than not, dismissed as inferior citizens. Their political inertia is explained away by the deleterious effects of poverty and cultural marginalisation. They are deemed to be suitable cases for treatment; targets for education programmes; the problem children of a political system under pressure.

And yet, in the space of a few days, these same “inert” citizens, utilising the social institutions that still count for something in their lives: schools; church groups: rugby clubs; were able to organise a demonstration of love and pride that stunned the nation.

There were some who found it all vaguely de trop: the man was, after all, only a rugby player. “For God’s sake – it’s not as if he cured cancer!” For others, it was touching proof of the essential innocence of Pasifika culture. “Oh, how marvellous! Just look at those hand-made banners. He obviously meant so much to them!”

Such misjudgements only reinforce the need to more fully (and accurately!) decode the meaning of Porirua’s response to Jerry Collins’s death. Clearly, this was about so much more than rugby.

For all immigrant communities there are vectors of escape. For some, the primary route to participation and acceptance in the dominant culture is education. For others, it is service in the military. For a great many more, however, both here in New Zealand and around the world, sport is by far the most effective vector for escaping the constraints of subordinated immigrant societies.

But sport offers more than mere escape. Unlike education, which all-too-often removes the escapee from the cultural milieu in which he or she was raised, sport provides its success stories with multiple opportunities to “give something back”. This may be as simple as giving the fans superlative displays of sporting skill and flair. But it can also include mentoring up-and-coming players, coaching local or national teams, and providing that all-important “role model” for the young and aspirational.

Jerry Collins contributed at all these levels and was recognised as having done so by the community in which he grew up. This could only burnish his status as a local hero. Not only had he proved himself in the European world (including faraway France!) but, as he was doing so, he had remained, in Leggett’s words, “a home-town boy at heart”.

A son of Samoa, a son of Porirua, a son of New Zealand – living proof that to be born Pasifika is no obstacle to greatness.

It was for this that they turned out in their thousands to honour Jerry Collins’s homecoming. For the living proof he provided that ethnicity is not destiny; that it is a good thing to aspire to greatness; and that it is an even better thing to achieve it.

For left-wing European politicians this is the crucial message – though not all of them will recognize, and even fewer will welcome, it. That Pasifika people neither see themselves, nor are they happy to be treated as, victims. That, even more importantly, they do not see the exercise of the franchise as a primary, or even a particularly effective, vector of escape. The European working-class constructed a political party and used it to lever themselves out of poverty and into relative affluence. Pasifika people appear to be engaged in blazing a very different trail to the future.

Much of it is about community. More of it than is any longer the case with European New Zealand is about spirituality. But most of it seems to be about hope and the power of good examples. Not everyone can feint and side-step like Jerry Collins, but in those moments of transcendent sporting artistry for which he will long be remembered, he has inscribed an irresistible invitation to every young Pasifika man and woman: