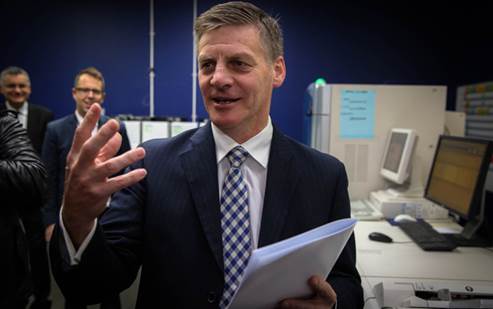 In the past, when governments broke promises, they were clumsy, heavy-handed, and were punished at the polls.

Political parties and their strategists have learned from those mistakes. Now, when promises are broken, they are done gradually, by incremental steps.  So when the media picks up on it and reports, the public barely notices nor cares.

One such recent broken promise was National’s dumping of the Kiwisaver $1,000 kick-start government contribution, revealed in this year’s Budget.

On 9 July 2008, Key gave a hint as to National’s intentions toward Kiwisaver;

“There won’t be radical changes. There will be some modest changes to KiwiSaver. We will announce that pretty soon.”

On 8 October 2008 – precisely one month before the general election that year – Bill English outlined National’s policy toward Kiwisaver if they became government;

National is proposing three changes to KiwiSaver. These changes will make KiwiSaver fairer, more affordable for current and future members, and more enduring in the long-term.

The three changes National is planning are:

• First, a reduction in the minimum contributions demanded of employees.

National thinks this 2 +2 arrangement is fair and affordable. We disagree with Labour’s plans to ramp-up KiwiSaver over the next three years.

National will make KiwiSaver a 2+2 scheme. Once this is bedded down, however, we will consider offering an alternative 3+3 scheme option, as and when economic conditions permit.

• Second, National will remove the tax credit that is currently paid to employers whose staff are enrolled in KiwiSaver. This will have no effect on the amount of money that goes into New Zealanders’ KiwiSaver accounts.

This subsidy was a transitional tool but it creates a complex money-go-round. It simply doesn’t meet National’s test for effective, disciplined government spending.

I note that the net effect for employers will be small, once they take into account the lower minimum contribution rate.

• Finally, National will repeal recent legislation which effectively discriminates against some employees who can’t afford to join KiwiSaver.

However, we will keep a safeguard in place, by amending the KiwiSaver Act to make it explicit that no employee can have their gross taxable pay reduced as a consequence of joining KiwiSaver.

National believes that these three changes to KiwiSaver will make it a fairer, more affordable and more enduring savings scheme.

No mention of cutting the $1,000 kickstart  contribution by government.

In fact, National made no mention whatsoever of removing the $,1000 kickstart contribution at the last election. Claire Trevett at the NZ Herald wrote this informative piece on the issue;

A broken promise is when someone reneges on something they promised to do or not do.

If you were silent, say, about axing the $1000 kickstart payment for new KiwiSaver members, it is not a broken promise, strictly speaking.

But it is an act of bad faith, especially when it happens in the first Budget following an election in which kickstart payments were not mentioned.

The amount of tinkering and tampering with the KiwiSaver scheme since it was announced in 2005 is incredible.

Most of Labour’s changes served to benefit the saver at the expense of the public purse. Not surprising seeing as it began the scheme.

And most of National’s tampering has reduced benefits to the saver and helped the public purse.

Very few other media commentators and columnists have taken National to task for what is undeniably a blatant election broken promise.

Cutting the $1,000 kick-start contribution is short-sighted. Even English had to admit on TV3’s ‘The Nation‘, on 23 May;

“…and New Zealand savings rates are now— have been positive for five years for the first time in decades.”

Our improved saving record has not come about because of anything National has done (despite English’s insistence). In fact, National has undermined every effort to improve this country’s dismal savings record.

In 1975, the then-Muldoon-led National government dumped the previous Labour government’s superannuation savings-policy. This cost our nation an estimated $278 billion (according to Infometrics and  the Financial Services Council).

The 2014 Infometrics report calculated that;

But Muldoon could not wait to get his meddling hands on the scheme, and like many things he touched, it died.

The same applies to the current Kiwisaver scheme.

The current Key-led National government’s piece by piece  gutting of Kiwisaver – ongoing since 2008 – confirms that no superannuation savings scheme is safe from that party’s political interference.

In this instance, removing the $1,000 kick-start contribution is a direct consequence of National’s ill-conceived tax cuts in 2009 and 2010, which left a gaping hole in National’s taxation-revenue.

National was so desperate to win the 2008 general election that despite the Global Financial Crisis, it proceeded with tax cuts that we simply could not afford.

National must now cut every form of expenditure it thinks it can get away with, if it is to escape the prospect of another Budget deficit next year.

We are the ones paying for what, essentially, was an election bribe.

On this occasion, though, our children will end up paying as well.

For more invaluable information, refer to Audrey Young’s excellent piece in the Herald, Why axing kickstart is an act of bad faith.

NZ Herald:  Why axing kickstart is an act of bad faith

Fairfax media: Compulsory super ‘would be worth $278b’

Regret at dumping compulsory super – only 37 years too late