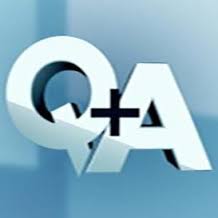 I watched both networks current affairs over the weekend.

The Nation is fun if you like bloodsports. The one thing they do well is their social media stuff during the show, and that’s about it. They haves introduced a new ‘Twitter Panel’ who tweet live during the show which is far preferable to the actual twitter account for The Nation which is gloriously defensive and spends most of its time trying to yell at other twitter commentators that it isn’t right wing and biased. The tiny viewing audience however means that no politician in their right mind would agree to go on the show to get mauled by Patrick Gower. If you want a fair run without the homicidal chipmunk of  current affairs creating his own narrative to beat you with, you go on Q+A.

Sure Q+A is dull as hell. Sure Q+A have the most boring and predictable panelists, but in terms of fair questions and the chance to hear the actual answers, it’s far better than the ‘GOTCHA’ moments The Nation tediously attempts to manufacture every second of the show. Q+A also rates its arse off compared to The Nation.

Winston is on against Osbourne and he crucifies him. If it was an audition  for a drowning man, Osbourne won. He became so shrill at the end only farm dogs could hear him. He is totally out of his depth, the fact Key was predicting that Winston had zero chance of winning just shows how far out of touch National are with an electorate they have taken for granted.

The panel is Michelle Boag saying all the things Michelle says, some other person I’ve never heard of and bloody James Dann!

Who the hell booked James Dann as a panelist for Q+A??? He was awful. He looked like a blinking possum in the headlights who was as deeply out of his depth as Mark Osbourne was and when he started slagging Mark off for the way he looked I just buried my face in my hands. Why did the Labour Party think putting a clown like James Dann up as a their voice on a prime time current affairs show was a good idea? Attacking Mark over the way he looks is about as childish and juvenile as it gets. Embarrassingly Boag pulled him up on it and slapped him down, even the host had to step in for God’s sake! I was waiting for James Dann to bust out, ‘I know you are, you say you are, but what am I’. That shit may float as cutting edge satire in a natural disaster zone, it ain’t doing Labour any favours at 9am on TVNZ.

God he was awful.

He managed to out redneck a redneck.

The rest of Q+A became a bit of a snore fest, but the interviews were far better.

The Nation desperately needs some actual direction from the directors to reign in their grievous bodily harm approach to current affairs, and someone needs to wake up Q+A.