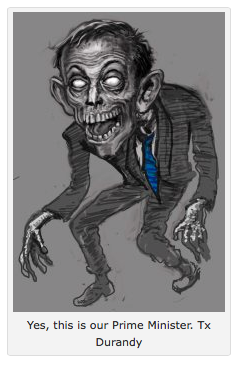 It is all over for Tony Abbott.

He survived a spill motion in today’s parliamentary Liberal Party meeting 61 votes to 39.

But the consensus is that he will not lead the coalition to the next election, due before September next year.

This is almost certain.

A NewsPoll public opinion survey released today has the ALP in an overwhelming position with a two-party preferred vote of 57 to 43.

Any election with those numbers would mean a wipe-out for the Liberal-National coalition and a Labor government would hold a comfortable majority.

Only a week ago Tony Abbott was addressing the National Press Club to outline his government’s agenda for 2015 and to push what has been called the “reset” button in an attempt to reboot his personal popularity and voter sentiment about the government he leads.

By the end of last week, two Western Australian backbenchers were so spooked by the negative reaction to Abbott’s NPC speech that they had called for a party room vote on his leadership.

After four days of speculation and furious lobbying, Abbott has held on to the party leadership and therefore the Prime Minister’s office, but only just.

Nobody expects this to be over.

With just over one-third of his MPs willing to vote for a spill motion, when there was no publicly declared alternative candidate, this is an overwhelming vote of “no confidence” in Tony Abbott.

But he is clearly a zombie Prime Minister, death marching towards the inevitable Abbocolypse.

How did it come to this?

There is one graphic that demonstrates very clearly why there has been a challenge to Tony Abbott only 16 months into his premiership.

He has never been popular with the Australian public. 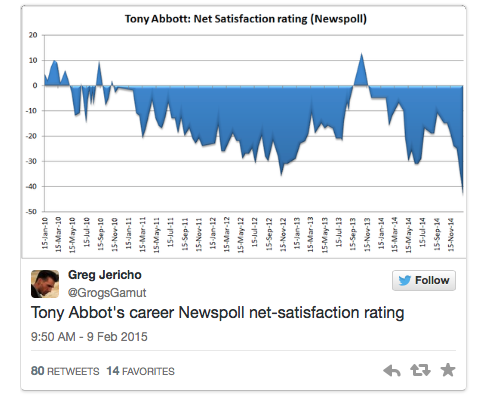 Abbott’s net approval rating has never been above 10 per cent and for most of his political life it has been in minus territory.

The last time it was positive was in the period of the 2013 election (held in September), but then it nose-dived quickly and now it is at minus 40+.

That says it all really. No political leader can expect to survive when the electorate hates them with visceral loathing.

You can read plenty of profiles of Tony Abbott and many pundits (me included) have theories as to why he is so unpopular. My view is that he’s not only stiff, wooden and somehow slightly creepy, but he is also so ideologically-driven in his attitudes that there is a dogged refusal to face reality clouding his judgment.

Abbott made dozens of solid commitments prior to the election.

There were promises not to cut funding to education or health and to quarantine the ABC and the SBS from further budget cuts.

He also (laughingly in my view) promised to be the “best friend” Australian workers ever had.

It turned out that these were just slogans — famously “three word” slogans — and that most of the promises would be ditched after the election.

They were ditched, and quickly too. 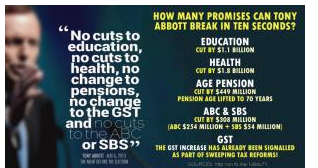 But Abbott has also made himself incredibly unpopular because of who he his.

He’s wooden and stiff and a backward-looking conservative.

He’s also prone to making stupid decisions — his famous “Captain’s Picks” — such as giving an Australian knighthood to Prince Philip; making himself the Minister for Women and, stupidly, threatening to “shirtfront” Russian President Vladimir Putin over the MH17 shoot down incident last year. 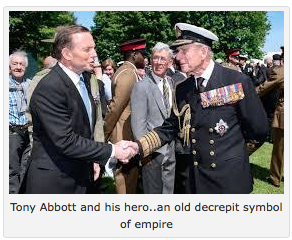 Abbott also does not understand the power of social media. Last week he called Twitter “electronic graffiti” and claimed not to pay any attention to it.

Well, that has been a monumental mistake. Twitter has been in meltdown for the past 18 months with vicious anti-Abbott memes and hashtags which go viral within hours of being started.

Abbott may have survived this and weathered the storm until the next election if he’d managed to hold onto the core — his own party and backbenchers.

But he’s failed here too.

According to insiders who’ve taken their complaints public (and the number is significant) Abbott and his staff have bullied and threatened MPs, refused to listen to advice and overruled their decisions.

He has failed to consult them and he’s made some stupid decisions that have now come back to drop on his head like bricks.

He has made a fool of himself in the eyes of intelligent Australians and he’s become an international laughing stock.

His days are numbered.