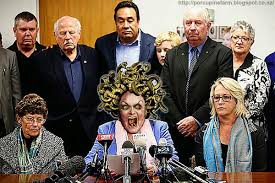 “I am not a Monster”, hissed Judith Collins

I don’t read the Sunday Star Times, so had no idea that they had just decided to make Judith Collins of all people a new columnist.

Her appointment cements into place the total full spectrum dominance the Right now have over all media in NZ. Rodney Hide in Herald on Sunday, Hosking on Seven Sharp, Paul Henry on TV3 and Guyon Espiner on Radio NZ ensures one unbroken neo-liberal narrative that stands alongside the inherent right wing bias within the mainstream media so evident during the last 6 years.

That the Sunday Star Times would appoint a Politician so mired in the filth of Dirty Politics shows that the mainstream media have learnt nothing from Dirty Politics and they actually just don’t give a damn about any pretence towards balance.

Those voices representing the Left have been slowly killed off. The Herald was supposed to replace Matt McCarten as a columnist, they instead ended up simply appointing Rodney Hide to spout his right wing nonsense. When  a Left voice is included, it tends to be the same old tired right wing Labour voices they roll out.

With the imminent launch of Slater’s new media weapon the Left are in total retreat along all fronts. The Standard is currently searching for a new direction as that voice of the Left, but their pathetic and limp criticism of Labour selling out on 24 hour surveillance shows that the leash around their neck from head office has tightened.

With Scoop about to collapse next month,  The Standard, Public Address and Pundit are about to lose their largest revenue streams.

The importance of a new media to counter this Right wing onslaught is more necessary than ever before.

In terms oft The Daily Blog, we are in talks over the summer to look at where we can build. Hope to have some news in the new year.

UPDATE: The SST has appointed Phil Goff as the supposed counter view to Judith Collins. So that’s the really right wing of the National Party debating against the right wing of the Labour Party. Only in mainstream media is that considered ‘balanced’.