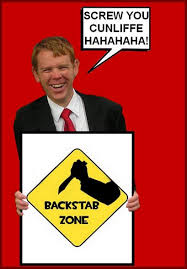 Let’s see The Standard use this image

Labour’s election review: What went wrong
Labour’s review panel has reported its findings back about the party’s election campaign and the reasons for the low 25 per cent result, identifying problems ranging from a failure to unite behind former leader David Cunliffe to resourcing and confusion over its “Vote Positive” slogan.

…Labour Party members should be incandescent with rage. THEIR choice for leader, David Cunliffe, was effectively betrayed by some in the Caucus who refused to accept the members decision and rather than show loyalty, did all they could to not unify behind his leadership.

There are those in Caucus who would prefer to be the winners of the losing team than lose control of the winning team. That some were active in allowing Cunliffe to fail means they were prepared to sit on their hands while Key won a 3rd term. There can be no greater betrayal. Well, the only greater betrayal would be using Slater or Lusk as advisers, and there are some who also did that.

It is a sad indictment on Labour that the first membership choice for Leader was ultimately betrayed by a jealous and spiteful Caucus. Let us all hope for the sake of NZ, that Andrew Little won’t suffer the same fate.