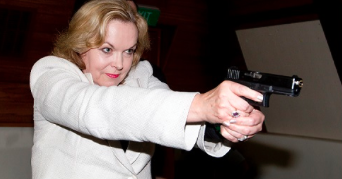 From a news report;

Ms Collins resigned before the election after being accused of working with the Whale Oil blog after emails were released suggesting she was “gunning” for former director of the Serious Fraud Office, Adam Feeley, when she was the minister in charge of the SFO.

A report by former High Court judge Lester Chisholm into her actions will be released this week, with some media reporting that it is expected to clear her name.

After the Old Boys’ Network swarmed around now-disgraced CERA boss, and sexual-harrasser, Roger Sutton, with support and to downplay the seriousness of his behaviour – this blogger predicts the following outcome of the investigation into Judith Collins.

The report from Chisholm will most likely be a total whitewash.

No one should expect accountability from this government. They will see “accountability” as  weakness, and a third-term government cannot afford to show any hint of weakness.

After all, New Zealanders love ‘strong’ governments. Even Muldoon’s increasingly erratic administration might not have been voted out had it not been for Bob Jones’ NZ Party, which split the right-wing vote in 1984. The under-current from a significant portion of the population that holds irrational, conservative views should never be under-estimated.

It will be a mistake for Key to restore Collins as a Minister. But the pressure from her National party cronies will become irresistible, and Key will have no choice but to eventually yield.

It will not be a decision that comes easily to our esteemed PM. Key is fully aware that Collins’ arrogance – like a certain ex-MP with a ‘don’t-you-know-who-I-am‘ attitude – inevitably draws trouble to herself. The Oravida-China fiasco, where Collins used a tax-payer funded trip to promote her husband’s milk company in Beijing, made unwelcome headlines for the National Party for weeks.

Collins escaped that scandal only by the skin of her teeth, when the Opposition and Media onslaught ran out of steam.

Next up, Collins’ bizarre personal attack on one of the media’s most inoffensive Parliamentary journalists, Katie Bradford, where the Minister made outrageous allegations of impropriety.

Collins eventually had to retract and apologise –  no doubt after an increasingly irritated PM put the hard word on his errant Minister.

Not content to keep her head down, Collins pursued a  secret political relationship with far-right blogger and convicted criminal, Cameron Slater, which, when uncovered in Nicky Hager’s expose, ‘Dirty Politics‘,  was the straw that finally broke the ministerial camel’s back. On 30 August she ‘resigned’ her portfolios.

This scandal could easily have triggered an early election had she held fast and refused to step down. History might have been different had Key gone to polls three weeks before the Nats were ready, and under  Collins-inspired storm-clouds.

A TVNZ-Colmar Brunton poll, released the day before Collins stood down, gave an unequivocal result to the simple question:  should Collins resign?  61% of respondents said yes; 26%  said no, and 13% had no opinion. (That 26% corresponds roughly to National’s core tribal-electoral support, as demonstrated at the 2002 general election.)

A day later, she obliged.

Five days after her ‘resignation’, a Fairfax media-Ipsos poll reported a massive 3.4% jump for National. No doubt National-aligned pollster, David Farrar, had already known that National would re-bound with Collins gone. His own internal polling would have shown this.

But here comes the ‘kicker’. On 5 September, on the same day as the Fairfax-Ipsos poll was made public,  a NZ Herald-DigiPoll, showed another conclusive result for the National Party. The majority stated categorically that they had had enough of the increasingly troublesome,  ‘accident’-prone, Member for Papakura.

Those results clearly illustrate the divisive nature of Judith Collins if she is in a position of authority.

Key would do well to remember these facts, even when/if the Chisholm Inquiry exonerates her.

On the other hand, a revitalised Parliamentary Labour Opposition probably relishes the prospect of a politically “rehabilitated” Collins appointed to a Ministerial role once again.

One can only imagine what new cluster-f**k is awaiting in the wings with this woman.

Letter to the Editor: Judith Collins

Judith Collins – Hypocrite of the Week