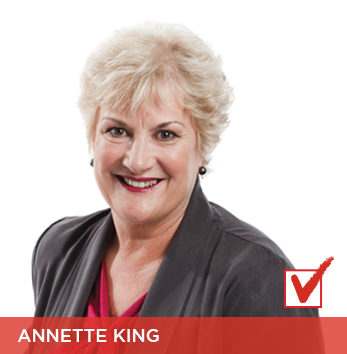 I’m not often surprised at the goings on in the Labour Party but I was gobsmacked to see Andrew Little has appointed Annette King as Deputy Leader of the parliamentary Labour Party.

I had idly assumed the role would go to Adhern or Robertson but Annette King?????? Andrew Little has astonished me.

What her appointment says is that Labour’s most right-wing MPs have such a throttlehold on the parliamentary party that Little felt obliged to give this role to someone instrumental in the neo-liberal reforms led by Labour in 1984.

These 1980s Labour MPs are the group which backed Roger Douglas as he trashed the country and the economy, sold our assets to his rich mates at bargain-basement prices while driving hundreds of thousands of families into poverty.

We live their awful legacy every day.

King was there alongside the likes of Phil Goff and Trevor Mallard as loyal disciples of Roger Douglas and rode shotgun for the one percent at successive Labour conferences as the right-wing fought off attempts by labour activists to return to labour values.

Far from quietly fading away these MPs are fighting within Labour for their political legacies. I could respect them if they acknowledged the dreadful errors they made 30 years ago but they don’t want to face the fact their whole political lives have been devoted to the precise opposite of what Labour once stood for. So they hang on in the hope some miracle will rehabilitate their political souls. No chance of that.

One of the ironies of the latest election result is that these MPs – so long a sea anchor dragging Labour back from its support for the one percent – are now stronger in caucus because they held their safe Labour
seats in a significantly reduced caucus.

Yet another fresh-faced Labour leader is tarnished by the clawing hands of the living dead.

There’s no rejuvenation for Labour here – it’s a case of back to the future.