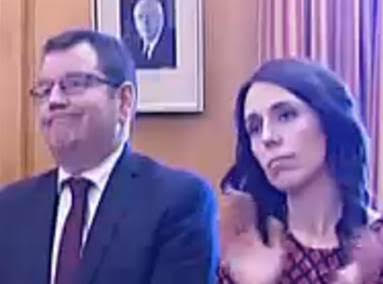 THE TRAGIC SCREENSHOT of “Gracinda” in defeat bears eloquent testimony to the bitter disappointment of the Grant Robertson-led faction of the Labour Party. And, yes, ‘Party’ is the right word. The Robertson machine has now extended its influence well beyond the confines of the Caucus Room to become a genuine party-wide movement. It’s all there in the numbers. From being the strong partisans of David Cunliffe, the allegiance of a clear majority of ordinary, rank-and-file members has shifted to Grant Robertson. It is a measure of just how hard Robertson’s people worked for their man’s victory that another 100 votes would have clinched it for him.

The campaign Robertson ran was impressive enough to earn the respect of even his opponents. Indeed, a number of these folk, casting aside all ideological and factional objections, freely admitted that the Robertson campaign was “by far the best” and “deserved to win”.

All the young men and women who staffed Robertson’s phone-banks, and who turned out day-after-day to press Robertson’s literature into the hands of startled party members, would undoubtedly agree. And if they’re anything at all like the young followers of Jim Anderton, forced to absorb their hero’s narrow defeat (by the votes of the Engineers Union!) at the 1988 party conference, then “unity” will be the thing furthest from their minds. Youth is a lot less forgiving than maturity. Already, Young Labour will be plotting its revenge on the trade union affiliates.

Gracing the office wall of one notorious trade union leader, back in the dear dead days of compulsory unionism, was a framed sign which read: “Old age and treachery will always defeat youth and idealism.” Andrew Little’s win may well be proof of that cynical sentiment. But if it is: if it was the opaque, behind-the-scenes manoeuvring of a handful of hard-bitten trade union barons that defeated the youthful energy and idealism of Robertson’s “New Generation”, then the Affiliates’ victory may be a Pyrrhic one.

The day when trade unions affiliated to Labour are required to supply the names and addresses of every union member declaring a willingness to be formally associated with the party cannot, now, be far away. It sits very ill with the sensibilities of the twenty-first century that, in an election to determine who shall be the Leader of the Opposition (or Prime Mnister) there can be two very different kinds of ballots cast. The first, in secret, on the basis of individual judgement. The second, in public, on the basis of collective deliberation.

Making a special effort to ascertain the views of working-class New Zealanders makes a lot of sense if your party calls itself ‘Labour’. But the views expressed and the ballots cast should reflect the active participation of real, flesh-and-blood workers – not the personal guesses of workplace delegates and/or the strategic calculations of paid union officials.

If there remains any remnant of the revolutionary fervour that once possessed the members of Labour Youth/Young Labour, it could hardly secure a more radical reform than the opening-up of avenues for direct participation by trade union members in the political deliberations of the Labour Party.

Never did the Rogernomes look more uncomfortable than when, in the late-1980s, hundreds of members of the Labourers’ Union filed into the Labour Conference in the Wellington Town Hall. They had been bussed in from the central North Island to register their protest at the mass redundancies then emptying-out the state-owned forestry and construction sectors. Their mass haka made the whole Town Hall shake – along with most of the Labour Cabinet Ministers present!

If Grant Robertson’s young followers genuinely want to roll back the influence of neoliberalism, both within the Labour Party, and in New Zealand generally, then radically democratising the affiliated unions’ processes of representation would be one of the best ways to do it.

But is that what they want? The Labour Left’s uncertainty about the Robertson Faction’s true ideological colours goes a long way to explaining Little’s narrow victory. Robertson’s slogan, “New Generation To Win”, could be read in two ways. It could mean, simply, that members should back a new generation (Robertson and Jacinda Ardern) to win the Labour leadership. Or, more obliquely, that there is a new generation of voters to be won for Labour.

But what did that mean? According to Robertson, it meant reaching out to small businesses and entrepreneurs. Such sentiments were bound to set alarm-bells ringing in the ears of Labour’s socialists. As any trade union official will tell you, it is the small businessmen, the entrepreneurs, who most commonly find themselves on the receiving end of the Employment Court’s negative judgements. No social class hates the trade unions with as much passion as the petit bourgeoisie.

Justified or not, there was a perception among the Old Left that the ambitious young things who pulled on Robertson’s red T-shirts were a whole lot more likely to identify with the aspirational dreams of small businessmen and entrepreneurs than they were with the nightmares of their over-worked, under-paid and un-unionised workers.

And this worry all-too-easily merged with the fear that a Labour Party led by Robertson and Ardern would be one which sooner or later (probably sooner) ceased to struggle against the currents of contemporary capitalism. That, desperate to escape the Opposition benches, it would, like the Labour Party of the early 1980s, reverse direction and go with the flow. So much easier that way. So much less flak from the news media. So much more money from the corporates – not to mention the small businessmen and entrepreneurs!

Little’s victory is, therefore, a win for those Labour members who still believe in the party’s emancipatory vision and in its antagonistic stance towards the demands of Capital. That it was so narrow is not simply a testimony to Robertson’s political skill and determination, but a worrying indication of just how strong the temptation has become among Labour members to stop struggling against the treacherous currents of capitalism – and turn the boat around.