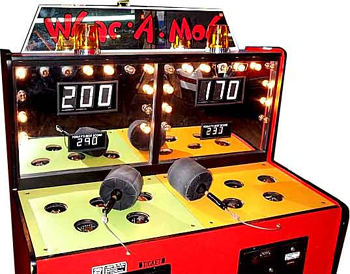 Whack-A-Mole was a popular arcade game from my youth.  It consisted of a waist high cabinet with holes in the top. Plastic moles seemingly randomly pop out of these holes. The purpose of the game was to hit as many of the moles as possible with a big soft hammer and drive them back into their holes. You scored points according to how successfully and quickly you accomplished this task.

US (and by implication NZ) foreign policy seems to resemble the game. Enemy moles pop up around the glob and we attempt to bomb them back into their holes. But this seems to be a never ending task. In fact the more moles our government whacks the more that seem to emerge someplace else.

We whacked the Soviet-backed mole in Afghanistan, then the mujahideen mole, then the Taliban mole and now the warlord mole is there.

We whacked the Qaddafi mole in Libya and now the Egyptians are whacking some other moles there on our behalf.

We whacked the Iraqi mole names Sadam Hussein (killing literally millions of Iraqis in the process), then we had Sunni rebel moles to whack, then some Iranian supported moles, and now moles dubbed ISIS.

We wanted to whack the Assad mole in Syria but got stopped by our own parliaments so had to use proxie whackers for a while. But now we are free to whack there again because the ISIS moles have popped out and they are very scary moles.

We whacked Kurdish moles in Turkey but now these moles are whacking ISIS moles and we are not sure who to whack next.

It really doesn’t seem like the smartest foreign policy in the world – even if your aim is world domination.