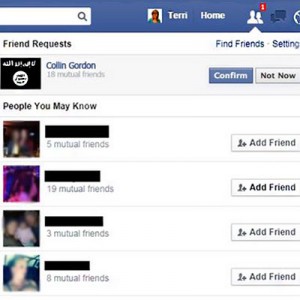 There’s always that one person, that one Facebook friend, usually a musician or event promoter, who, when you so foolishly accept their friend request, will completely inundate your news feed with copious event invitations and promotions. The person who, despite how nice they are, you eventually have to block on the basis of sheer annoyance. At my University in Canada, Collin Gordon was that person.

Collin was a business student and local events promoter in our town. He was a feverish sports fan, a proud supporter of our University’s Wolfpack Sports teams, and founder the “Kamloops Social Club”, to which I still have my card.

Eventually the events invitations stopped and it seemed as though Collin, like the rest of us, had graduated and moved on with his life, leaving our sleepy University town behind.

This was my assumption until about a month ago, when I was at work in the Amnesty International office in Auckland, reading up on the situation following the release of Amnesty’s report on the barbaric war-crimes taking place in Iraq. I stumbled across an article from the Canadian Broadcast Corporation which described the recent influx of Western fighters taking part in “terrorism tourism”. The article described how Canadian fighters are traveling to Syria and Iraq to join the ranks of the so called Islamic State (IS), and published a list of suspected Canadian IS members, a list which included a student from my hometown in Canada. And there he was: smiling happily beside his brother Greg, the unmistakable founder of the “Kamloops Social Club” Collin Gordon.

My first thought: “how could this happen?”. How could this normal, albeit enthusiastic kid go from tweeting about wanting to marry Nicki Minaj, to calling the beheading of James Foley “perfection”? From the look of Collin’s Twitter feed, the transition seemed seamless.

Collin’s story is becoming more and more common following the IS’ strategic campaign to recruit Western fighters. While the Organisation had historically avoided any social media and had very little contact with journalists, through the creation of the Al Hayat Media Center, the rumored media branch of the IS, a vast shift has occurred in the IS public relations campaign. It is now widespread on Facebook, Twitter, Youtube, and even uses the occasional meme.

The most notable perhaps of their online endeavors is the series of filmed executions by a man who is rumored to be a Western recruit. While sparking outrage amongst many, the effectiveness of the IS’ social media campaign has been so successful that it has forced governments around the world to grapple with ways to deal with this online recruitment of foreign fighters.

In Australia, new anti-terror laws give sweeping powers to government agencies and the Foreign Fighters Bill, which looks to restrict travel to some parts of the world, is expected to be passed later this month. And New Zealand Prime Minister John Key is looking to follow suit proposing to toughen up New Zealand’s anti-terrorism laws.

But there’s a fine line here; will other rights get trampled in the process of dealing with a conflict that, while being carried out thousands of miles away, has infiltrated borders to recruit impressionable youth?

As Amnesty International’s reports highlight, the IS is committing atrocities, including war crimes. There is therefore concern that if an individual, during their travels, is going to join the IS, the likelihood of them being involved in the commission of war crimes themselves arises. And so it is important to look at what kinds of legal restrictions would be imposed.

Under Australia’s new legislation, a 24-year-old man is facing a potential lifetime jail sentence after being accused of “preparing to enter a foreign state to engage in hostile activities”. A lifetime in prison for “planning” to join the IS.

Further questions have also been raised over the unsurprisingly large number of western fighters who quickly become disillusioned with their life with the IS and attempt to return home.

In the news this week, two Austrian girls, aged 15 and 17, who joined the IS after being recruited by a local leader and convinced to go to Syria, are now reportedly seeking help to return home after they were married off as “jihadi brides”. They are now pregnant. Unfortunately when Western recruits wish to return home, they face many barriers: firstly from the IS directly (punishment for speaking out is reportedly torture or execution); and secondly, from their own home government who, if they don’t outright refuse to let recruits return home, will definitely not help them in any way and will likely sentence them to prison upon their return.

The case of these girls highlights that often those recruited as Western fighters are impressionable, young adults. In fact, according to the Huffington Post, the majority of IS recruits are actually under the age of 30 and, through recruitment propaganda, will often times romanticise what life would be like living in the war zone that is Iraq and Syria.

There is no doubt that countries must have systems in place for dealing with this issue. But as Western governments struggle to find effective ways to deter citizens from joining the conflict in Syria and Iraq, there is also no questioning the fact that human rights must be in the forefront of any decisions made.

New Zealand should not be rushing through these security and anti-terror changes under urgency, time must be taken to consider, consult and ensure proper process is followed.

And it must be remembered that these recruits are in many cases young, and often times bored, people, who made a friend on Facebook.