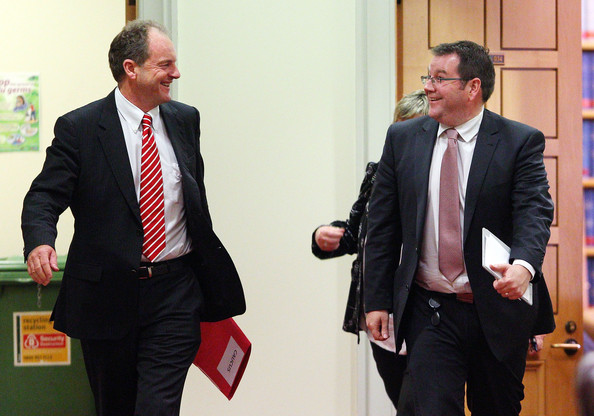 There’s an old saying that success has many fathers, but failure is an orphan.

Not so in the Labour Party, wherein soul-crushing defeat on a scale unseen since 1925 definitely has many fathers (and more than a few mothers and eager midwives) … but for the most part, the serious questions of blame and paternity have only really focused on the role of one man – the Leader.

Post-election, the mainstream media narrative appears to have been all about Cunliffe (and occasionally a prospective replacement in the form of Robertson, once the flights of fancy about a Jacinda Ardern-led Labour proved lacking in any substance not being over-indulged in by the commentariat) – either not-so-subtly pointing out that some New Zealanders (a demographic customarily referred to as the “Press Gallery”) have taken an instant disliking to the man … or basically casting his main rival as a slightly-grown-up student politician.

Personally, I do believe that Cunliffe contributed to Labour’s rather lackluster result – and in any number of ways. A complete demolition and take-down of the man called Silent T’s role in this election campaign is well beyond the scope of this piece (and would take the focus somewhere not especially useful anyway) … but part of me really, really hopes that Labour will finally, here in 2014, learn the obvious lesson it should have picked up in 2011 and all the way from 2011-2014:

Labour *can’t* (yet) compete with National when it comes to presidential-style politics, and may arguably be better served through adopting a variation on Bill Rowling’s old slogan of “Man for Man the Strongest Team” in concert with a healthy dosage of “let’s at least *try* and make our headline policy agenda broadly palatable to the working and middle classes our votes majorly come from”. Mostly the second bit.

Because seriously. When I think of Labour’s policy priorities this last campaign, three things stand out to me: “Raise the retirement age to 67; Get into Surplus just a year later than the Nats; and tax the middle class’s retirement savings with a CGT”.

So let’s run through that again … Raise the retirement age – for workers. Tax the middle class on their retirement savings. Announce you’re not going to deliver on your promise of free doctor’s visits for over-65s … because you really, really want to match the neoliberal National party’s quixotic pursuit of surplus at all costs only a year later.

Read those headline policies back to me and then TELL ME that Labour lost the election because it was “too left” and needs to tack right. Go on. Do it with a straight face.

I know exactly how annoying it is when people and commentators from outside of one’s party roll up with a newspaper and pretend to have become overnight experts in your party’s affairs, development and history; so I’m not going to try and sketch out a detailed alternative policy manifest, campaign platform or Parliamentary List. Besides, if Labour wants a good example of a solidly left-wing economic policy-set that’s demonstrably popular with the electorate … they need look no further than New Zealand First’s. As has been pointed out by any number of commentators, we’re the only left-wing party to increase its representation in Parliament this term.

But what I will suggest is that in the minds of far too many in the electorate, the commentariat, and even by the sounds of it some within the party itself … Labour has become subconsciously associated with a deep sense of malaise – indeed, unelectability.

Obviously, he’s completely and utterly correct about this; so it’s just baffling and mystifying why the Labour campaign he presided over here in 2014 – with its strong emphasis on trying to match the Nats as hard-hearted surplus-producing, middle-class-CGT-taxing retirement-age-raising neoliberally “responsible” fiscal managers – was EXACTLY THAT.

You can see further evidence of this in Cunliffe’s various vague and vainglorious attempts to blow-by-blow match New Zealand First. We announced an intent to provide 3 free doctor’s visits for Gold Card holders a year. Cunliffe came out and said Labour would do free doctor’s visits for over-65s all up. I cheered! They’d taken our commitment and ramped it up to eleven! Awesome!

Then Labour suggested that they had to axe that policy due to changed numbers in the pre-election economic forecast prepared by National, if they wanted to be able to deliver surplus on schedule.

So because it had hemmed itself in thanks to a virtually inexplicable commitment to try and match National as “competent” neoliberal economic managers able to deliver a surplus, Labour found itself demonstrating to voters that it prioritized trying to beat National at its own (fairly irrelevant) surplus game over the health and wellbeing of our senior citizens.

It then added insult to injury by subsequently attempting to meet New Zealand First’s #Renationalization and #Kiwifund bottom lines … through establishing a sovereign wealth fund that would seek to restore Kiwi state ownership of assets at a rate of a hundred million dollars a year. Considering there’s several billion dollars of assets flicked by this National government, we might be here awhile; even leaving aside questions of whether free doctor’s visits for senior citizens are a better use of public money than attempting to deliver a surplus and reprioritizing a few hundred million to play Coalition Footsie with New Zealand First.

All of this means that I was enormously surprised by Grant Robertson’s claim on Monday that he would have been able to lead Labour to victory where Cunliffe couldn’t.

I mean, what does this claim rest on? The idea that Robertson wouldn’t have stuffed up a Leader’s Debate question about the application of Labour’s Capital Gains Tax?

Yeah, see if you answered that question with anything other than “wouldn’t Robertson have done better as Labour leader by taking David Lange’s advice and axing the CGT proposal in the first place…?” then you’re fundamentally misunderstanding the problem.

There are a really, really, really long list of things unpopular, broken, or festering about the Labour Party here in 2014 – and I don’t just mean some of their MPs.

This idea that you can just suddenly change what’s sitting up the top of the pyramid and then expect all the great stone blocks beneath the capstone to Rubik’s Cube around until they’re in some sort of electable fronting is simplistic, reductionist, and also dangerously flat-out wrong. It leads to a lazy sort of thinking that basically suggests if you make one symbolic change … then the entire substance of the rest of the edifice will follow.

If Labour wants a serious show at leading the left-wing and anti-neoliberal parties to coalition victory in 2014 – hell, if Labour wants to have even a shred of moral or economic legitimacy as it claims to “lead” the Opposition this term – then they are going to have to take one helluva long, hard look at who they actually are and what they actually stand for. Parading round in the colour red and referring to yourself as a “worker’s movement” (I’m *assuming* that’s what the word “Labour” in Labour is there for?) is no salve for having a finance spokesperson that apparently believes electricity generation assets don’t have to be run in the New Zealand national interest (let alone state owned) or that “competitive markets don’t need regulation”. With quotes like that flying around, it’s pretty clear that Labour lacks a genuine anti-Neoliberal vision for the future of this country; and even while I applaud and recognize Labour every time they go in to bat for workers’ tea-breaks, or raising the minimum wage, or New Zealand First’s awesome Reserve Bank Amendment Bill …  I really have to ask if quibbling around the edges of National’s economic model is *really* the best we can hope for from what nominally claims to be our leading Opposition party.

Sadly, I think it very well might be; and am citing my own fundamental pessimism about Labour’s ability to galvanize itself (hell, even conceptualize itself) as a visionary anti-neoliberal party as justification for why New Zealand First and The Greens ought to take the leadership of both the Opposition and any putative future government. We certainly seem to do a better job on both policy and motivating voters to turn out on election day to support our causes. (although, to be fair, given the Greens have dropped a seat, it’s really more a case of The Greens being *less worse* than Labour at getting their supporters turned out)

New Zealand deserves, wants and needs a government that will do more than just blow on the thermonuclear servo-station pie that is neoliberalism. Indeed New Zealand requires, fiends and /craves/ a fundamentally better class of policy and/or pie.

Like many readers of this blog, I know a small number of good, committed and principled people within Labour. I wish them every success in their quest to both grow and take back their pie.

But having seen what they’ve managed to deliver with their previous two attempts … you’ll understand why I think it’s high time that NZF and the Greens take over the catering duties.