As anyone with access to the internet knows, a few days ago the news broke that Jennifer Lawrence’s iCloud account had been cracked and over 60 nude photos of her had been leaked to the public. The cracker did not stop at Lawrence over 100 mostly female actresses, athletes and singers have had their naked photos hacked and posted on the internet sewer known as 4chan – an anarchic nameless playground that appears to be mainly, but not exclusively inhabited by angry young men. Early on 4chan declared ‘there are no girls on the internet’ unless of course they are naked ‘girls’.

The gossip blogger Pariz Hilton was one of the first to snipe and repost the naked (uncensored) photos of Lawrence on his website. However,  after a massive backlash from the twittersphere he took them down and apologised, something that strikes me as beingtoo little and much too late.  The leaked nudes have spread throughout social media rapidly as people are sharing them without the consent of the subjects. Many of these images are showing up on blogs, news sites and yes even on our very own The Edge and The Rock radio station websites. Blogger Jessie Hume drew parallels between the actions of The Roast Busters posting pictures of their young female victims to The Rock’s radio hosts Jono and Rob reposting Lawrence’s naked photos to their website. Of course, being the proud misogynists that Jono and Rob are they made a joke of the whole incident posting this picture/parody: 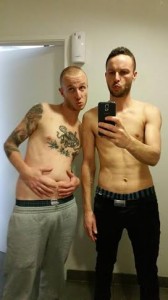 Clearly, making fun of women being publicly humiliated is a good time for Rob and Jono, The Rock and the demographic they represent. Making jokes at the expense of women who have been violated and who are victims of a sexual crime minimises the reality of the damagedone. This is what rape culture looks like.

Of course it is not just Ben and Jono who are revelling in the humiliation of famous women, as it’s apparent that millions of people worldwide have taken pleasure in clicking on links that direct them to naked photos of famous women’s bodies. This vulture voyeurism makes those peeping complicit in a criminal act on a global scale. That is not hyperbole, this is the truth. It is illegal to post naked photos of someone on the internet without their expressed permission and if you, creepy dude, are looking at them you are now complicit in this crime.

…this violation gives us a peek into a sick but thriving subculture, or really a series of subcultures, of men who are excited by the idea of violating a woman against her will and who get together in online spaces to swap ideas on how to do this, tell bragging stories about violating women, and sharing the photographic evidence of their violations.

The predictable knee-jerk reactions have ensued after the photographs leaked, the internet has been rife with victim blaming of the women. After all, according to the argument, they should not have taken these pictures in the first place so what did they expect? Why does this all sound so fucking familiar?  In one sharp tweet Lena Dunham sums up what is so wrong with these types of reactions:

We live in a culture that endlessly blames women for other people’s violence and violations against them. We live in a culture that fears a women’s sexuality, but teaches us it is the only real currency of value. This culture shows us again and again that  if we as women decide to cash in on our sexual currency then we will be shamed for it. A culture that minimises the abuses women suffer and endlessly tells them that any violence they suffer at the hands of men was our own fault. Whether a man rapes a woman or her or hacks the accounts of over a hundred famous women’s online accounts in the search for naked photos and dumps what he finds in public domain, these brutalities must have occurred because of our choices and our behaviour. We should not have taken those nude photos in the first place or worn that short skirt.

So to anyone whatever gender you maybe, who clicked on links that showed you naked images of Jennifer Lawrence or any other famous person who did not give you permission to do so, you are now complicit in a crime and are perpetuating rape culture.