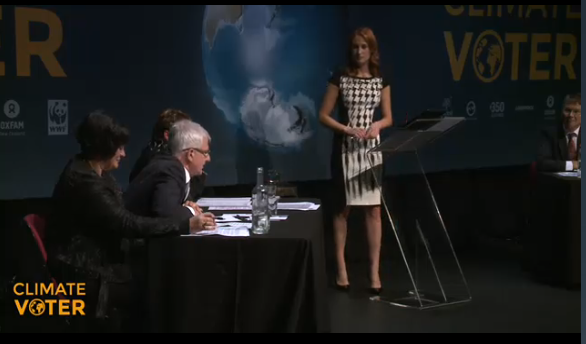 This kinda went under my radar, didn’t know it was on which isn’t very good when one considers how catastrophic climate change will be within a decade. I think this may have been preaching to the converted when the issue is across the entire society.

Good streaming quality. Bit grim though, like a Christian Youth Chastity Summit. Samantha Hayes didn’t seem to know where to look having to share the stage with John Minto.

Applause loudest for Green Party. Every time Russell looks up he gets cheered. The other participants have been gracious enough to roll up to what is effectively a Green Party candidate evening.

It quickly gets bogged down in jargon. Oh God it’s dull. The plants are falling asleep. When Tim Groser starts sounding entertaining you know you are in a death spiral of boredom.

I believe that the Greens must have the spine alongside Internet MANA within a Labour led Government to force through a serious and radical rebuild of our economy into a sustainable and green version. This jargon fest argument about ETS trading schemes and disproportionate tax burdens doesn’t explain that or do justice to the magnitude of the environmental challenges before us. 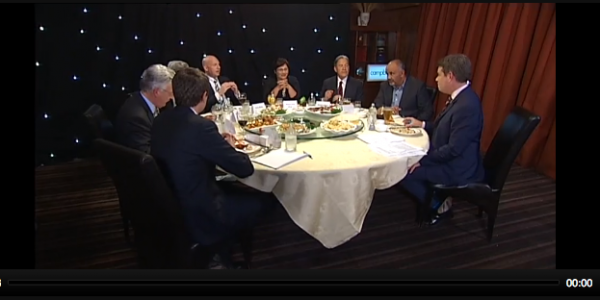 The Campbell Live dinner was odd and delightful and it gave real insights. It put to shame the drunk shout fest that the God awful Press put on last night, it reminded us how genuine political discussion with passionate people in a relaxed environment can actually be.

Well done John Campbell for such a unique idea. Interesting points, Jamie Whyte pointed out just how badly National need ACT now. Peter Dunne signalled he could work with Labour. Metiria showed the passion that would make her one of the greatest Cabinet Ministers this country has ever seen. Laila drove home the point that a vote for Winston may be a vote for National and made the argument that the youth vote could be the decider.

I love how the dial plummets when Jamie Whyte or Colin Craig  say anything.

Metiria and Laila were the absolute winners. They had creative ideas and passionate answers.

The leaders were sincere, articulate and spoke for their constituents well. It is this kind of politics we deserve in the 21st Century, not the hate politics of WhaleKey’s National Party.