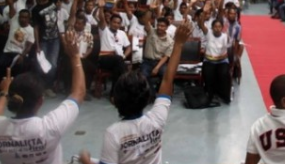 PACIFIC SCOOP reported this week that East Timor’s Appeal Court had scrapped the country’s draconian new Media Law and sent it back to the National Parliament. The ruling was welcomed with open arms by journalists, foreign correspondents, civil society advocates and democrats.

Problem is that some legal interpretations doing the rounds seem to suggest this isn’t quite the full story. In fact, perhaps, some say, reports “jumped the gun” in suggesting that the court had ruled the law completely “unconstitutional”.

Tempo Semanal, the independent publication run by investigative journalist  José Belo, is probably closer to the mark by saying that parts of the law “violate” the Constitution of Timor-Leste. It is an embarrassing defeat for Prime Minister Xanana Gusmao who had backed the law.

This law is far harsher than the controversial Fiji Media Industry Development Decree imposed by the military-backed regime in Fiji in 2010, which casts a shadow over next month’s election, yet while New Zealand media has had a lot to say about the Fiji media law, it has largely ignored the legislation ushered in by a democracy in Dili.

This is what the Tetum-language Tempo Semanal report said in its stilted English – and the Timor-Leste Press Union, which has been fighting this law from the start, gave a big thumbs-up:

DILI, TEMPO SEMANAL: Timor-Leste (TL) Court of Appeal has declared that two principal articles of the law social communication (komsos) produced by the Fifth Constitutional Government and approved by the National Parliament as unconstitutional, because it violates the Constitution of the Democratic Republic Democraticde Timor-Leste.

This law, which was introduced in the National Parliament during 2013, prompted a debate and consultation in Commission A National Parliament in mid-February. It was then brought back before a plenary session having been approved by a majority of votes on 6 May 2014 but only four deputies voted to abstain before it was submitted to the President of the Republic, Taur Matan Ruak, to give his assent in June of this year.

However on July 15 the President of the Republic sent the Court of Appeal his opinion, as the law has recently been questioned by those working in the media and civil society in the country, including friends of Timor-Leste abroad.

In some of Articles, which His Excellency the President of the Republic has questioned, we have seen that there are indeed some which curtail the activities of journalists, and their freedoms, because journalists who were carrying out their work, insofar as this concerns sanctions, against national order. These heavy sanctions are in contravention of these ordinances, and do not really give freedom to the press.

According to the law, the Court must respond by the 25th, therefore we have responded, verifying that there are indeed some articles which contradict the Constitution of the Republic,” President of the Court of Appeal, Guilhermino da Silva declared to journalists on Monday morning at the Court offices in Caicoli, Dili.

Therefore, on 10 August, the Court of Appeal reached its further opinion from several documents, having recently heard opinions from the Minister of Public Affairs and also from the President of the National Parliament. Then, according to Tempo Semanal’s sources at the Court of Appeal, on 11 August the decision was sent to President of the Republic but he  was on a trip to the Aileu, Ainaro and Same districts, meaning that it was only today (18 August) that he returned to his office.

Articles 20 and 40 limit the activities of journalists, therefore this Court has declared that these articles are unconstitutional. Consequently, His Excellency the President of the Republic will return this bill to the National Parliament so that it may be revised,” said Justice da Silva.

Following this, the leadership of the Timor-Leste Press Union (TLPU) stated that they not surprised by the decision of the Court of Appeal because from the start they believe that some articles in the law violate the Constitution:

“Thankfully, despite the Fifth Constitutional Government and deputies in Parliament approving the law on social communication, some articles have been deemed unconstitutional. Therefore, the TLPU very much appreciates the courage of the three Justices of the Court of Appeal in reaching opinion concerning Article 20 about duties and Article 40 in this law. As an organisation, TLPU is also grateful to our 130 members for their efforts along with other journalists in Timor-Leste and abroad. We also extend our respect to civil society and international media organisations such as International Federation of Journalists and Reporters Without Borders with whose help today we have managed to get this result. The result is not only for the journalists of Timor-Leste but for the nation and people of Timor-Leste,” said José Belo, president of the TLPU.

“TLPU continues to demand that legislators do not make law create articles which are unconstitutional and do not shield dignity and integrity of Timor-Leste as a state founded on democracy and the rule of law,” José Belo added.