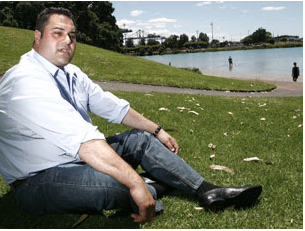 One of the many sordid “bit”-players in Nicky Hager’s book, “Dirty Politics“, and one of Cameron Slater’s inner-cabal, is businessman, National Party card-carrying cadre,  and former city councillor, Aaron Bhatnagar; In 2008, Bhatnagar was caught by journalist, blogger, and IT commentator, Russell Brown,  posting derogatory comments on Wikipedia to smear political opponants;

Using the alias of Barzini _ a power-hungry psychopath from Mario Puzo’s novel The Godfather _ Mr Bhatnagar created entries for his Action Hobson opponents in the Hobson ward and made unflattering changes to the entry for Mayor Dick Hubbard.

After winning a council seat and watching Action Hobson councillors Christine Caughey and Richard Simpson go down to a C&R rout in Hobson, Mr Bhatnagar tried to remove the Wikipedia entries for his opponents at 3am the following morning.

Bhatnagar  was also John Banks’ campaign manager in Banks’ unsuccessful 2010 mayoralty bid, and later himself stood National’s candidate selection process for Epsom for the 2011 general election. (He subsequently lost out to John Banks.)

But more than being a paid-up, card-carrying party apparatchik for National, Bhatnagar was part of far-right blogger, Cameron Slater’s inner sanctum.

In Nicky Hager’s expose, Bhatnagar’s dirty tricks – a re-hash of his 2008 Wiki exploits – is carefully laid out;

“Slater was in regular contact with his blogger friends Cathy Odgers, blog name Cactus Kate, Peter Smith (not his real name) and Aaron Bhatnagar, with whom he often talked over his attack plans...” – “Dirty Politics”, pg 20

“Slater got the tip-off for his biggest 2011 attack from his blogger friend Aaron Bhatnagar, a former Auckland city councillor and business investor who had written a guest post as ‘Whale Oil Business Correspondent Winslow Taggart‘, promoting ‘one of New Zealand’s best run’ retirement companies, Ryman Healthcare, in which he was a shareholder. Bhatnagar’s approach to politics is summed up by his own words to Slater: ‘I’m getting bored. I need mischief to keep me busy...’ ” – “Dirty Politics”, pg 29

“On another occassion he [Bhatnagar] asked Slater to help him find a ‘paparazzi photographer’  to ‘spook’  a lawyer outside his legal chambers.” – “Dirty Politics”, pg 29

“This time Bhatnagar had been sniffing around the Labour Party’s websites and stumbled across an insecure location containing gigabytes of sensitive party information, including lists of donors and supporters. In the middle of election year, this was embarrassing and potentially very harmful to the Labour Party. Bhatnagar passed the find on to his friend.” – “Dirty Politics”, pg 29

The following Facebook conversation between Cameron Slater and Bhatnagar showed the cavalier and unethical attitude both men had to Labour’s computer vulnerability;

Slater: That website info will hit soon. Watch the damage that ensues.

Bhatnagar: “I’ve been meaning to ask you! LOL [laugh out loud], when do you run it?

Slater: been working thru it all… was going to do it this week but Goff is away. Far better to do it when the putz is back

Slater: the most damaging is the 18000 emails, and the Credit card transactions

Bhatnagar: fuck me, I hadn’t been that forensic myself. This will be huge

Slater: got the whole of their email database

Bhatnagar: oh no, LOL…. this is violence writ large

Slater: I think some teaser videos of screenshots and stuff drip fed over a few days , then drop the bomb say wed morning so [Parliament’s Wednesday afternoon] general debate is awesome

… The media are far too lazy to do what i have already done… so prob best to package it into bite size pieces.

Bhatnagar: unreal. I knew there was heaps there, but I hadn’t actually leached it all. Credit card info? That’s insane. Labour will be ruined…

Bhatnagar: could set back the online left wing  community for three years…. I’ve told no one

Bhatnagar: I wouldn’t wreck what might potentially be your greatest story…. – “Dirty Politics”, pg 30, 31

At no point during that conversation does Bhatnagar even raise a question of ethics regarding Slater’s intentions to public data from the Labour Party computer. On the contrary, he is clearly supportive.

“The attack began on Sunday 12 June with an article Slater had arrangedin a Sunday newspaper. He simultaneously began publishing a series of posts on his blog with the tag line ‘Labour Leaks’, announcing a long list of ‘rorts’  that would be progressively ‘outed’ on his site over the following days…

… Early on that Sunday morning Bhartnagar contacted Slater again. Their conversation is very revealing. ‘And so it begins…,’ Bhatnagar wrote. ‘Yep and it is going to hurt,” Slater replied, ‘that document is devastating… this is going to be a feeding frenzy, especially when I publish all the credit card transactions, then the membership lists, then the 18000 emails’. Thinking of the media reaction, Bhatnagar advised Slater to ‘keep your phone charged then – you will need the battery life!’

Slater then set out in writing the motivations  underlying the leaks. It would be, he said, ‘death by a 1000 leaks’.

I have… cross referenced names with letter writers. I will have the definitive list of labour activists.

shut down their membership flow

and shut down their online campaigns

Bhatnager joked back: ‘Join the Labour Party and the Whaleoil email loop at the same time. Not a compelling message for left wing voters.’ “Dirty Politics”, pg 33

As Nicky Hager pointed out, “the aim was not to expose  poor Internet security or some wrong-doing or to prove a political point, but to do as much damage  as possible to the Labour Party“. Clearly, Bhatnagar was revelling in Slater’s damaging attack on the Labour Party;

“Later that evening Bhatnagar  got in touch as well, suggesting a celebration lunc: ‘yum char thursday midday”. Slater said he’d be there. Bhatnagar asked, ‘What’s next in the death by 1000 cuts?’ ‘I haven’t decided yet,’ Slater replied. “- “Dirty Politics”, pg 36

In fact, on one occassion, he positively gloated over it, as this exchange showed on 26 November 2011;

“… The anti-MMP campaign failed, but Slater felt empowered by his successes. ‘I feel like this election campaign has been mine, plus my loyal tipline submitters,’ he told Bhatnagar. ‘Well, I am tempted to say that ripping open Labour’s website was a big part of it,’ Bhatnagar replied.“- “Dirty Politics”, pg 75

This is the same man – Aaron Bhatnagar – that Cameron Slater’s friend, and Minister of the Crown – Judith Collins –  had appointed to the government body, the The Real Estate Agents Authority (REAA) on 26 April last year;

Justice Minister Judith Collins today announced the reappointment of five members of the Real Estate Agents Authority and the appointment of one new member.

Those reappointed to the Authority are:

The new appointee to the Authority is Aaron Bhatnagar of Auckland.

The REAA is a watch-dog for Real Estate agents. It’s mission statement is crystal clear;

The Real Estate Agents Authority (REAA) is the independent government regulatory body for the real estate industry in New Zealand.

Our job is to promote a high standard of service and professionalism in the real estate industry and help protect buyers and sellers.

Aaron Bhatnagar does not fulfill any of the Authority’s mission statements;

He is not independent – he is a member of the National Party and a government appointee.

He is an associate/friend of Cameron Slater, who, in turn is a close confidante/friend of Judith Collins.

His past activities over the last six year make him an inapproprite choice to sit on the Board. From his behaviour over the years,;

– it is clear that Mr Bhatnagar’s judgement is poor; has questionable ethics; and is the last person who should be serving on the Board of the REAA.

Sabin: “What real estate qualifications does he have?”

Collins: “You don’t have to have real estate qualifications to be on the board. [Prompted by aid] In fact exactly the opposite or otherwise he would have a conflict of interest.”

That conflict of interest exists. According to Bhatnagar himself, he is a property investor. He is quite candid about his investments, including “ commercial property through other entities“.

By the Minister’s own words there appears to be a prima facie case for a conflict of interest.

Accordingly, I have written  to  Minister Judith Collins and to the Chairman of the REAA;

On 18 August, you stated in an interview with TV3’s Brook Sabin that if Aaron Bhatnagar held interests in property, that would constitute a conflict of interest with his current position on the Real Estate Agents Authority (REAA) whom you appointed on 26 April last year.

Mr Bhatnagar does indeed seem to have investments in commercial property, and according to your assertions, this is a clear conflict of interest.

There are also other matters that demonstrate that Mr Bhatnagar’s position on the REAA is no longer tenable, and the full story will be presented tomorrow (Monday) on “The Daily Blog”.

I have also written to the Chairperson of the REAA on this matter, seeking that he remove Mr Bhatnagar from the Board.

I also call upon you to remove Mr Bhatnagar from the REAA, as he is clearly not fit to be on the Authority’s Board in any capacity.

I am writing to you in regards to one of your fellow Board Members, Mr Aaron Bhatnagar.

It is my contention that the REAA is not well-served by having Mr Bhatnagar on the Board of the REAA. He has demonstrated a clear lack of sound ethical decision-making and has engaged in behaviour that is both unprofessional and unscrupulous.

In 2008, it was reported that Mr Bhatnagar had been found to be tampering with  the internet encyclopedia, Wikipedia, to discredit  his political opponents in the 2007 local body elections.Employing an alias (“Barzini”), Mr Bhatnagar created negative entries for his political opponents in the Hobson ward and made damaging alterations to the Wikipedia entry for then-Mayor Dick Hubbard.

Mr Bhatnagar then tried to remove all evidence of his on-line activities.

Just recently, it has been confirmed that  Mr Bhatnagar was involved in illegally accessing the Labour Party’s computer in 2011 with other persons (Jason Ede and Cameron Slater). The personal information of thousands of people, plus credit card details, was downloaded and used for political purposes as part of an on-going smear campaign.

“The Real Estate Agents Authority (REAA) is the independent government regulatory body for the real estate industry in New Zealand.

Our job is to promote a high standard of service and professionalism in the real estate industry and help protect buyers and sellers.”

Mr Bhatnagar has demonstrated poor judgement and engaged in activities that whilst not resulting in criminal prosecution (yet), show a poor character when it comes to ethical decision-making.

Considering that your organisation’s central responsibility is to monitor and discipline for   ethical behaviour, I have arrived at the unalterable conclusion that Mr Bhatnagar’s position on the Board of the Authority is no longer tenable.

I ask that his resignation be sought forthwith.

Bhatnagar  must resign or be sacked forthwith.

Real Estate Agents Authority: About Us

“Dirty Politics” and The Teflon Man

So who’s a “conspiracy theorist” now?!

Liberation: Winners and losers in the Act Party leadership coup

The Jackal: Who is Aaron Bhatnagar?

The Standard: Aaron Bhatnagar – I barely know the guy