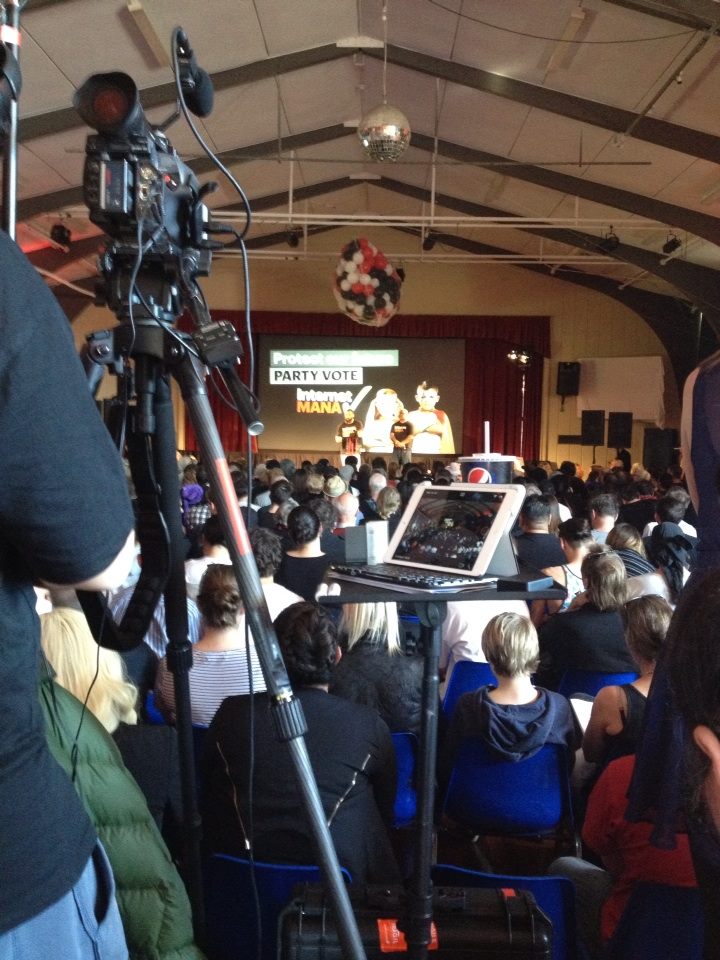 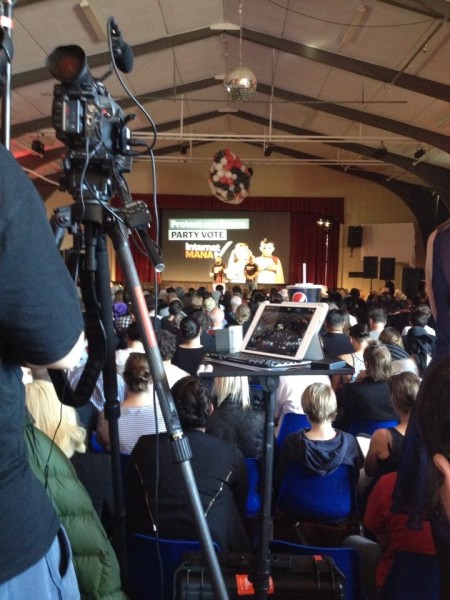 Internet MANA launch their campaign after an extraordinary road tour and after gaining 4% in the Colmar Brunton Poll, today should have been the start point for a momentous occasion  in progressive political history.

It was, but sadly most won’t know it.

The venue is packed and full. Much talk about Dirty Politics and the astonishment at how Key and Co have managed to get away with so much. The early voting campaign  they are about to launch will be the most sophisticated in NZs political history and I think will ensure them a shot at 5%+.

The energy and the passion is vibrant. There is an air of excitement that rarely seeps into the moribund monolithic larger parties. Change and hope are here.

“We are going to take NZ back from the Americans’ roars Kim Dotcom after he reels off what has become a well worn speech he has given up and down the country over the last few months. He tells the delightful story of hacking NASA (to find out if there are aliens), hacking a bank (to give Greenpeace $20million) and hacking the credit rating of a politician. Hilarious stuff, but I noted how TV3s Brook Sabin stiffened as he heard these stories. I don’t think many of the media there had heard these tales before and suddenly sensed a scoop in connecting Kim to the recent hacking of Slater.

That ugliness comes later. But I remember thinking to myself, ‘he thinks this story is something new’.

For the record, I don’t think Kim had anything to do with the hacking of Slater’s computer. Nicky Hager is a man of integrity and honour, and if he says the source was not Kim Dotcom, then it was not Kim Dotcom. My own personal theory is that it is activists loosely associated with Anonymous NZ who have taken utu on Slater for his horrifically insensitive comments about a young South Island man who died in a car crash.
Back to the event. 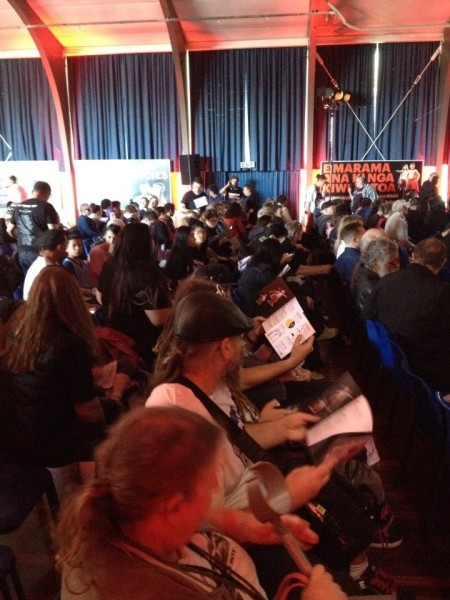 Internet MANA have just announced full employment as a goal. The place goes nuts. It’s Laila’s turn now. She is one of the great progressive politicians of our generation and watching her gather an army to do battle on the political battlefield is one of the most exciting things in left wing politics right now.  The lofty aim of full employment is tempered by economic plans to use ACC reserves to work for job creation. $1.7b per year to go into community, council and Iwi projects to build jobs.

To put the cherry on that cake, Laila reinforces the free tertiary education policy. For those who would complain that tertiary students shouldn’t get that kind of subsidy, I’d point out that every graduate needing a student loan passes the cost of servicing that loan onto everyone else in the cost of the services they end up providing – the only person who wins from students loans are the bloody banks! Making Gen Y as indebted as Gen X isn’t progress, it’s time to provide for younger generations the way we provide for the older generations.

It was a success. It was clever. It was passionate.

I was looking forward to the headlines. The headlines were a train wreck.

The media thought they had a scoop with Kim’s hacking tales and immediately started a feeding frenzy that Internet MANA weren’t prepared for. The horror at watching an amazing set of policy launches getting boiled down to questions that had nothing to do with those policies prompted a response by Pam that while entertaining, managed to get used to eclipse the entire event.

At least National had their bullshit housing policy covered before the media got stonewalled trying to ask legitimate questions about actual evidenced behaviour of Key’s staff and Ministers. Internet MANA didn’t get the same curtesy.

Internet MANA might get around 5% this election, and that would be an extraordinary political win, but if the nation gets to hear about free tertiary education and full employment it could be 7%.

It’s a kick in the guts that the nation didn’t get to hear that tonight.

Interesting that the Prime Minister storming out and refusing to answer questions about his Government’s dirty politics is less important than Pam swearing at journalists?