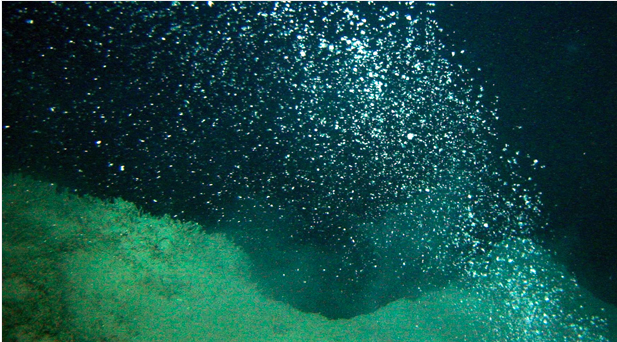 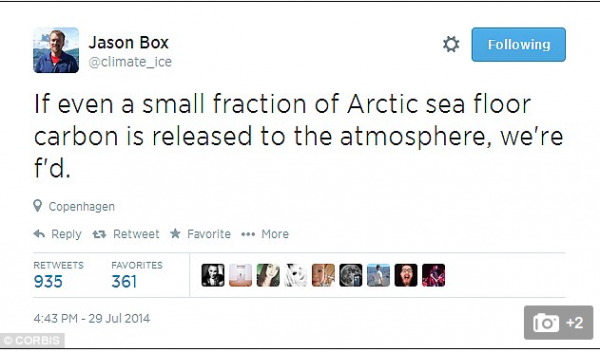 One use of the f-word has flown under the radar in the last few weeks of frantic electioneering, but it’s arguably the most important. We ignore it at our peril.

If even a small fraction of Arctic sea floor carbon is released to the atmosphere, we’re f’d.

He was blogging about the finding by a Swedish research team on an icebreaker in the Arctic Ocean that bubbles of methane were rising to the sea surface, causing local atmospheric methane levels to soar. Dragon breath blowing around the Arctic. Asked to expand a little by Motherboard senior editor Brian Merchant, he was less coy than on Twitter:

“Even if a small fraction of the Arctic carbon were released to the atmosphere, we’re fucked,” he told me. What alarmed him was that ”the methane bubbles were reaching the surface. That was something new in my survey of methane bubbles,” he said.
“We’re on a trajectory to an unmanageable heating scenario, and we need to get off it,” he said. “We’re fucked at a certain point, right? It just becomes unmanageable. The climate dragon is being poked, and eventually the dragon becomes pissed off enough to trash the place.”

You might think Dr Box is an outlier, a scaremonger amongst climate scientists. He isn’t. Take the time (only half a hour) to view this video — Arctic Emergency: Scientists Speak — by Max Wilbert. A collection of senior Arctic scientists point to the warming that’s already speeding ahead unchecked in the Arctic, and to the risks of sudden massive methane release from the vast stores in permafrost on land and under the shallow — and rapidly warming — seas over the East Siberian Shelf. There’s as much carbon locked into the frozen land and seabed as in all the earth’s land vegetation.

The big danger is that if warming proceeds — and remember, the Arctic is already warming far faster than the mid latitudes and tropics — the permafrost and seabed methane will melt and make attempts to control atmospheric greenhouse gas levels far more difficult. It’s conceivable that the methane release could be large enough to swamp any emissions cuts we manage. The anthropocene would be over before it started, the reins of planetary control ripped from our hands by a fast feedback we only saw coming when it was too late to do anything about it. As Dr Box puts it:

The trajectory we’re on is to awaken a runaway climate heating that will ravage global agricultural systems leading to mass famine, conflict. Sea level rise will be a small problem by comparison.

While our politicians gurn for the cameras, while the ACT Party dines out on its climate denial, the National Party pays lip service to emissions cuts while presiding over steep rises, and Winston Peters can’t even be bothered to have a policy, the planet gets on with the business of warming fast. The hubris of politicians who think they are better judges of climate risk than earth scientists is being found out on the grandest possible scale.

Meanwhile, Dr Box believes that there are things we can all do to reduce the risk of a methane catastrophe. We have to cut emissions, hard and fast:

This should start with limiting the burning of fossil fuels from conventional sources; chiefly coal, followed by tar sands [block the pipeline]; reduce fossil fuel use elsewhere for example in liquid transportation fuels; engage in a massive reforestation program to have side benefits of sustainable timber, reduced desertification, animal habitat, aquaculture; and redirect fossil fuel subsidies to renewable energy subsidies.

The news from the north means that cosy assumptions that we have decades to act are dangerously misguided. We can’t afford to wait for the great juggernaut of international cooperation to creak into action.

This is an all hands on deck moment, says Dr Box.

We’re in the age of consequences.

Would somebody please tell our politicians?