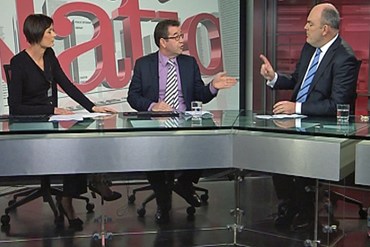 Grant Robertson and Stephen Joyce talking over each other at every turn on the Nation – with Lisa Owen barely able to even moderate her own breathing let alone two front bench sluggers – was a study on how not to conduct a political debate. There will be many more examples with more than just two candidates coming up which will demonstrate how badly and quickly political discussions can degenerate during the election campaign, but that one was a classic.

The talk-over is a losing tactic and the smart kids don’t play that game. Robertson and Joyce are both petty enough to engage in it – Joyce with distinct accomplishment.

The purpose is for the second person to interrupt the first speaker – but not in the form of an interjection – it is the second speaker beginning a speech in the hope that persisting with it will eventually defeat the stamina of the first speaker and they will prevail. The hope is they will say some magic words at some point and the moderator will defer to them and stop the first speaker. This never happens of course because that would be to reward incredibly rude behaviour.

It is delusional to persist in it as a tactic with any thought this is ‘winning’ an argument. It is also essentially childish: barely above the infantile resort of fingers in the ears, raving ‘la, la, la, la I’m not listening!’ repeatedly. Joyce’s ‘la, la, la la, sciency stuff, labour sux, I’m not listening’ over and over again as he did on The Nation was just dumb. He looked a right prat – and next to Robertson that’s no mean achievement.

In the real world the first speaker does not and will not abandon their response when they have only got a word and a half out and the other person has launched into a speech of their own. It is disrespectful of the other speaker, the moderator and the audience. It is not winning on any level. It is characterised by obstinacy and that is not a positive trait to witness. This two man double-talk was tortuous viewing. It was a bad case of none the wiser, twice the stupider.

Thankfully someone sorted out who should take the harden up pills and who should take the chill out pills during the break, because when they re-emerged it was as if the unpleasantness had evaporated. It was an altogether different scene now in the second act. No more uncivil, prattish, alpha-maling. Owen had regained control from the verbal rioting and anarchy that held sway in the previous encounter. But it was too late for Joyce.

Joyce had used his trump weapon of the over-talk already. Joyce was less inclined to do nice. He does combat with blunt instruments as a preferred method. He is familiar with the corporate circle-jerking expected to be undertaken in the course of visiting his chums opening up new mines and pet subsidised industries, but he doesn’t do such a convincing or confident job of nice. Not when in the vicinity of a lefty anyway. Like his parliamentary style it begins as patronising and then after a side-trip through a lecture on economics it ends up somewhere in the neighbourhood of insulting. It just sort of happens naturally and I suppose he can’t help himself.  The bluff and bluster show was cancelled and the show where examination and cross-examination happen kicked off. What a delightful change from the tour de farce before the break.

Joyce’s nervous, high-pitched giggle was a defensive mistake made over and over again now he couldn’t rely on the bulldozer of over-talk. Each instance of the theatrical cackle an instant and irrevocable concession recognised by most people for what it is. In this situation Robertson just had to plod on at this point to get home. Cumulatively Joyce’s forced laughs combined with his inclination in the first half to concurrent competing commentary made the Minister a picture of panicked insecurity. A bit mad. Not mad mad, just a bit Nick Smith sort of mad. The egg was broken, scrambled. This was not how to do debating.