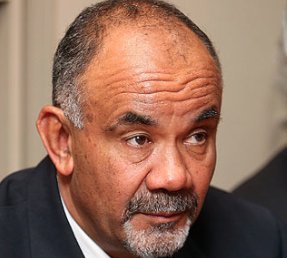 “Nothing can be achieved by performing a protest haka outside the fence or from an opposition bench in Parliament. It was not protest or opposition that negotiated the landmark programme of Whanau Ora, undoubtedly the most effective social and economic gain for Maori ever in our modern history”.

Parse the bullish language and spot the thesis: movements are out, governing is in. This is politics beyond the veil, where the political class rules the void. The Māori Party is not necessarily promising progress, its only promise is to govern. This is the lousy state of Māori politics. The highest value and the only end is sitting “at the table of government”.

And that creates a frustrating paradox for Māori activists: the Māori Party is the legacy of movement politics – that is, the Māori protest movement – yet it shuns political organising for the politics of integration. Sitting at the table is the means and the ends.

“If you actually want to achieve something”, explains Te Ururoa Flavell, “you’ve got to be there and that’s what we’re determined to do”. However “you’ve got to get the numbers in order to have real influence”. In other words, #realpolitik. Flavell is certainly right in one respect: the surest route to change is the cabinet. Yet that view – an article of faith in the Māori Party – is profoundly ahistorical. Did the first hīkoi, Bastion Point, Raglan Golf Course and Pākaitore achieve nothing? Was Parihaka for nought? Were He Taua, Ngā Tamatoa and the Waitangi Action all impotent? Of course not.

The Māori renaissance – and its radical wing, the protest movement – was a political offensive. It was not an institutional strategy, but a movement strategy. The aim was to build the infrastructure of dissent. With that, we could and did force change. From land to language, the government submitted to (some) Māori demands. The Māori Party is the legacy of this movement. The argument goes that the movement has matured. The Māori Party is an institutional strategy and that was the end which the protest movement sought. Well, yes and no.

The fight is against the system in its totality. Without engaging existing political efforts, the Māori Party leaves itself exposed. Its only leverage is the seats it holds which – without the movement behind it – are soon to be none.  There is still a gap between the problems Māori face and our ability to combat them. That is, we are still on the wrong end of 174 years of inequality. Reversing that, or resisting the centrifugal forces that would put us down, requires that infrastructure of dissent. That means the movement and the political party. The relentless dissociative logic that the Māori Party employs means that it will never be the force it thought it would. If the party really thinks its only job is to sit at the table and govern, then do we really need them?